To train hard or not, that's the question

To train or not to train - that is the question (Shakespeare - if he was an athlete).

We ask ourselves this on a regular basis since if we are not sufficiently recovered from prior hard workouts (or are subclinically ill), we can make matters worse by doing high intensity training.  If we have not fully recovered, we should just take it easy and do a "recovery day" style of workout.  Many studies have pointed to resting HRV as a good indicator of "readiness" to train.  Abundant journal article, blog posts, phone apps and HRV experts have written and recommended this.  The advantage to waiting for proper HRV recovery is to get a superior training response and fitness outcome, which has been shown by several studies.  Even our gold standard HRV software, Kubios has a "readiness" app for Android. 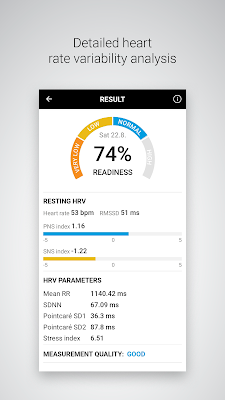 However, for some folks, it is difficult to find the calm, restful time needed at the beginning of the day and do this on a consistent basis.  There are kids to take care of, dogs to feed and a job to get to....  In addition, this type of measurement needs to be done often enough to get trends based on previous values.

In lieu of resting HRV as a readiness score, can we leverage the DFA a1 relation to exercise intensity as a surrogate?  In the last post we discussed the utility of DFA a1 as a marker of endurance exercise fatigue in ultra-marathon runners - while they were still exercising.  If the a1 is suppressed immediately post ultramarathon, is it suppressed the day after?  Although we do not have published data on this, I would like to begin to share some personal observations on how I use a1 as a training guide in alerting me to a fatigued state.  This type of observational evaluation should be easy to incorporate into one's training regime.

What are we looking for?

In essence we want to see if the DFA a1 is not behaving normally during or past the warmup before embarking on the decided session intensity.  For instance if your HRVT (power/run speed or HR at which a1 passes 0.75) becomes altered, this is an indication that the autonomic nervous system is being affected by some perceived stressor.  In my case, I start a session with cycling at a warmup power of 155 watts (50w below usual HRVT of about 205 watts).  At the warmup power, DFA a1 is usually well above 1.25, and it will take a few minutes at the HRVT/AeT power (205w) to begin to see the a1 drift to about 0.75 (and stay there).  Here is an example: 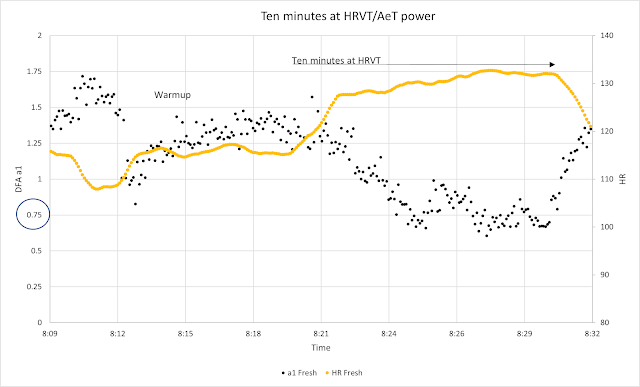 The following graph consists of an overlay of the plot above (Fresh), another day of "No sleep" (NS) and a third session consisting of the day after the HIT interval sessions (Fatigue).  The heart rate monitor was the same in each case, same room temp and fan speed, time of day, nutritional status, artifact <1%, etc.

Fresh - This consisted of a 2+ hour ride with 10 minutes at the HRVT/AeT (above graph), 10 minutes just above the MLSS, a 60 sec Wingate max and otherwise mainly zone 1.  Although this may seem trial to many of you, keep in mind that I'm not a superior athlete and am approaching 65 years old.  Also of note, the "fresh" day was preceded by 3 days of "easy" cycling of 60 to 90 minutes each day (all zone 1 of 3).

Fatigue - This was the day after the "Fresh" session described above.  After the usual warmup, I cycled at about 15 watts below the HRVT for 5 minutes to see what would happen (so in zone 1 throughout).  Since the DFA a1 dropped so low, I did not extend the interval for 10 minutes, even though I wasn't subjectively tired.

No sleep - With the "no sleep" session, I had not done any exercise for 2 days and normally would have had very "fresh" legs to hit it hard.  Unfortunately due to some events beyond my control, I only had about 2 hours sleep.  I was pretty tired and did not even bother doing anything above the warmup power since my realtime a1 app, (Fatmaxxer) was already indicating lowish values. 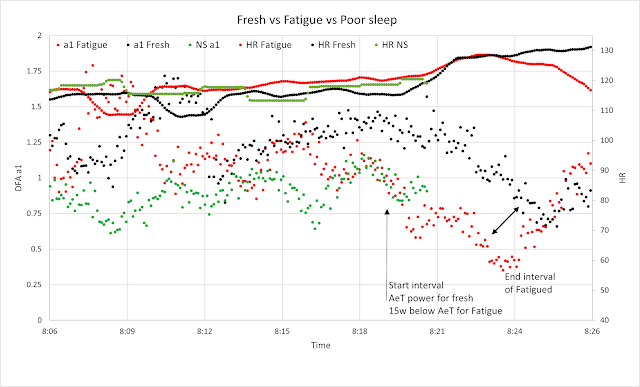