New firmware was just released today for the Movesense ECG module.  I thought it would be interesting to take a quick look at any potential changes or improvements.  One of the vexing issues I've encountered is the non uniform R wave peak seen at high zoom resolution.  I was most curious about this as well as the impact of the firmware on HRV precision (particularly DFA a1).  One of the easiest ways to compare the DFA a1 during exercise is to simply do an incremental ramp and plot the values over time.  We will take a look at that as well as the waveform in this post.

Although upgrading the firmware was not difficult, caution is recommended.  The bootloader needs to be updated as well, which opens the possibility of not being able to go back to the old firmware or even bricking the device (or in this case "coining", since it's the size of a coin).  Unfortunately, after the flash, the module was "dead", no LED light present and not seen by my phone.  After a battery pull, I was able to get it into bootloader mode and flashed it again - and it was successful.  Bottom line - be careful.

The android app is the same as previous with a max sample rate of 512 Hz.  I chose 500 Hz and had no issues with my Samsung S20.  Although I could not get the app to split screen or be present as a popup (force closes), it did stay active in the background with no issues even with screen off.

Here is the ramp in Kubios (auto correction mode) 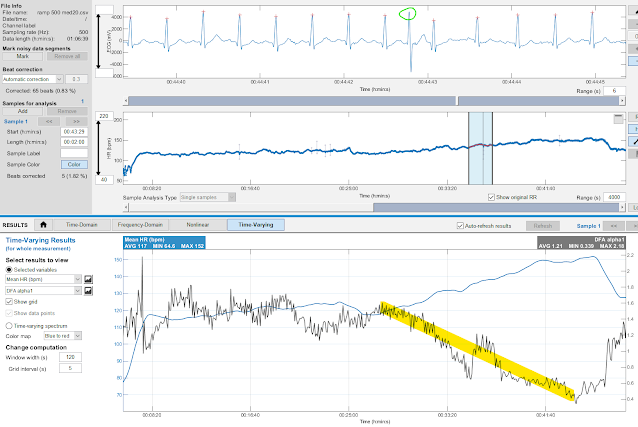 The nice linear decline in DFA a1 is in yellow.  Notice the "hump" in the middle of the ramp, that is due to the lone APC (with some aberrant conduction) noted in the top ECG tracing (green).

Let's compare to the Polar H10: 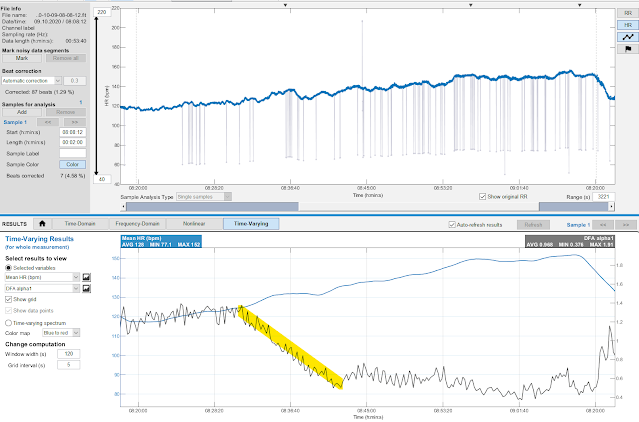 The yellow linear decline in DFA a1 is there as well, but the artifacts are high, between 2 to 6%.  The "hump" is not there, but could be lost among the artifact effects.

Comparison between the H10 and Medical Module:

This is difficult to easily do with confidence.  Alignment is always a concern, therefore a demonstration of how heart rate comparison is done - they should be matched at each time point.  The following is a plot of the heart rate of each device at every time point (ramp plus warm up): 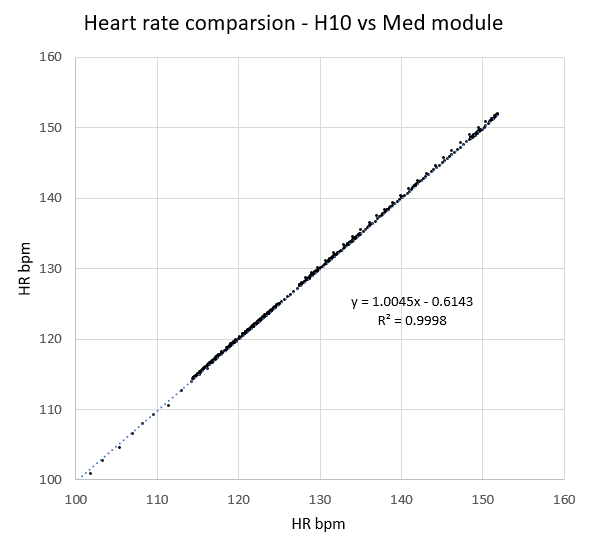 How does the DFA a1 look: 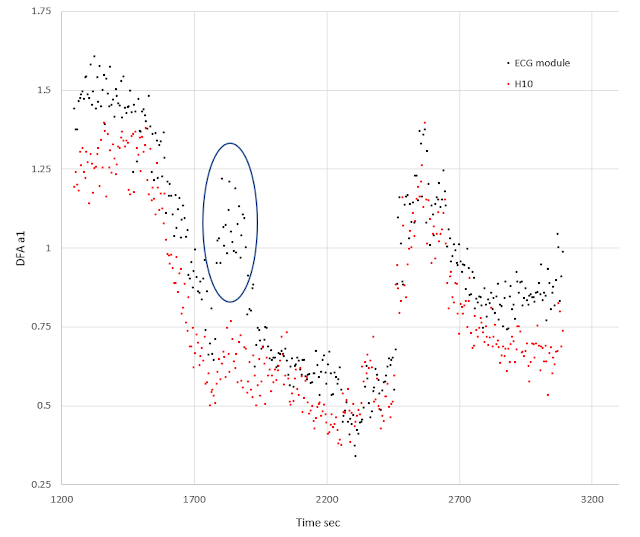 The "hump" is circled (that is related to the one aberrant ECG beat) and I would ignore that discrepancy.  However, it does seem that the Medical module was higher throughout the ramp, especially in the early portions.  Toward the end, things get a lot closer together.  At that time in the session, the H10 is subject to higher artifacts.  This does not mean the medical module is less precise in obtaining DFA a1 readings, for all we know, the H10 may be at fault.  Indeed, the DFA a1 response with an H10 has not been well studied during high intensity exercise.

As previously described in some older posts, here is the derived heart rate at which DFA a1 equals .75.  It is quite possible this is closely related the first ventilatory threshold. 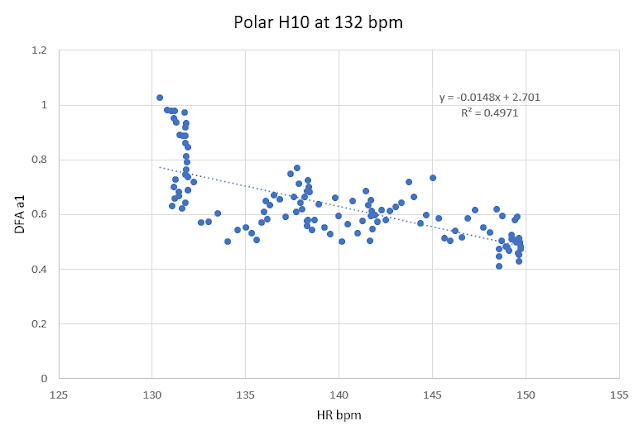 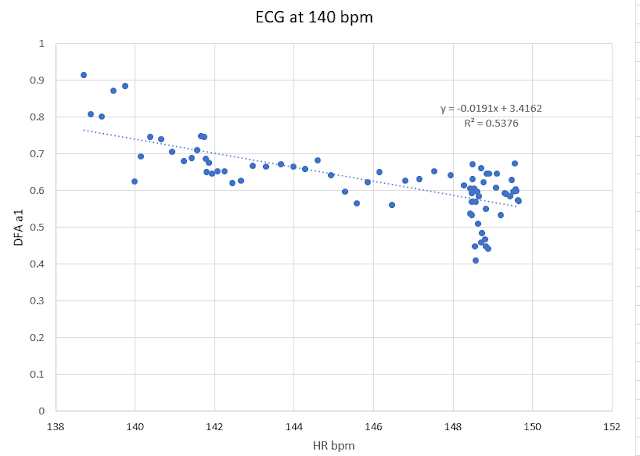 DFA a1 over time: 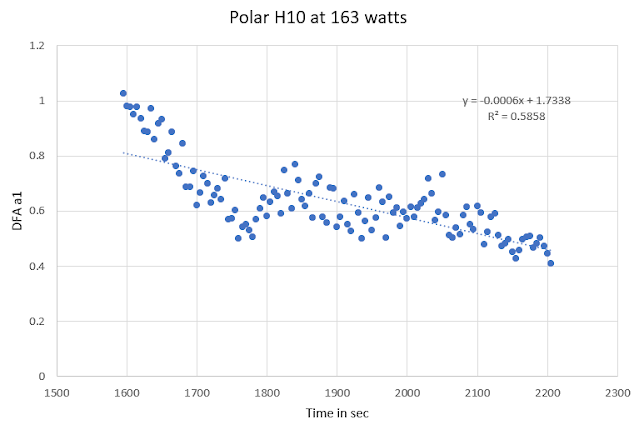 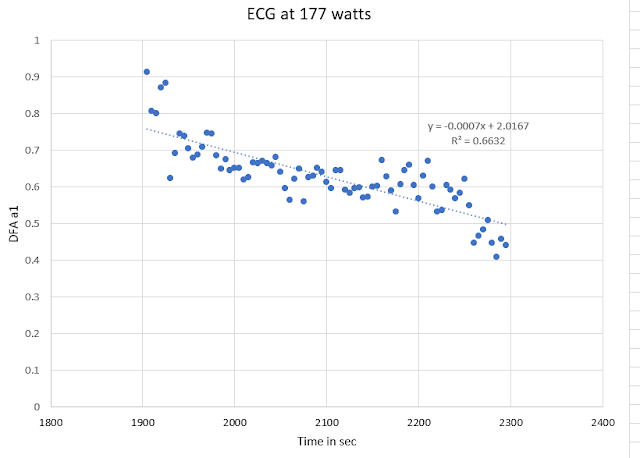 It certainly appears that the Polar H10 is reading the DFA a1 decline with intensity differently than the Movesense Medical.  Only comparison to a high quality reference device will be able to fully resolve this.  In the past, the wattage at which DFA a1 = .75 has been between 170 to 190 watts, depending on conditioning, heat, stress and device.

In the past, the ECG waveform was prone to distortion with the Movesense module.  Here are a few examples: 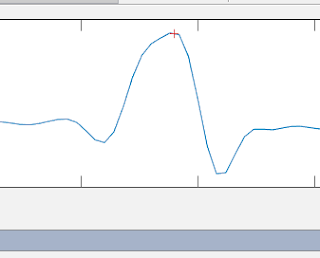 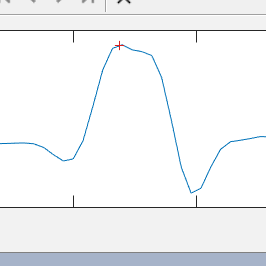 If the fractal related DFA a1 index is to be accurate, very precise pattern matching is optimal.  The above examples should logically have some kind of effect on the self similarity index.

Here are some waveform examples from today (all the same scale as above):

Although there is a mild degree of asymmetry, it appears better than previous.  I need to ask the development team if any changes were made in the firmware to cause this, or was this just a good day.

An interesting observation in waveform shape is the following.  I recorded a session using my wife riding the indoor bike trainer with the Medical module several weeks ago (old firmware).  The waveform was perfect (with only a 250 Hz sample rate):

It makes one wonder if changes in chest muscular activity or dimensional differences could be factors as well.  I'm considerably larger with more chest muscle present - items that need to be accounted for in the signal filtering software.

This is an extract from a 30 second, all out Wingate test done today: