FatMaxxer - a new app for real time DFA a1

The last year has seen much change in the field of dynamic HRV during exercise for aerobic threshold determination and intensity regulation.  Between published studies exploring the theory, validation and use in varying populations, the importance of monitoring DFA a1 in real time appears to be of value.  Up to this point we have had one app to do so, HRV logger by Marco Altini.  This was constructed as an add on to an already mature iOS app and was not designed specifically to track a1 during "on road" exercise.  However, another developer has released an Android app called FatMaxxer that was specifically created to calculate DFA a1 every "x" seconds (with 2 min windows) and display this along with HR.  You must use a Polar H10 and android device (no iOS).  The artifact correction method is similar to the HRV logger with either workout mode (5%), a 25% threshold method or an auto mode that adjusts for heart rate. 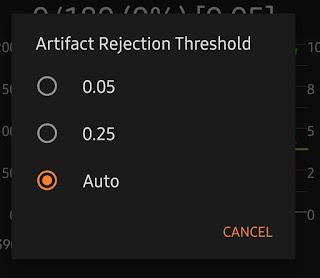 Here is a replay of a previously done session:

The axis on the left represents HR and DFA x 100 (so a .75 is 75 on the scale).  The right axis is the Artifact in percent.  The digital display contains artifacts (2 of 280 beats), elapsed time, HR and a nice big DFA a1 in the middle.  RMSSD is also in the digital display.  Files are saved as both RR intervals and timestamped DFA a1, HR, artifacts.

Accuracy
Since we are basing training thresholds on the value of DFA a1, precision is of utmost importance.  Other HRV indexes (SD1, SDNN) rely on looking for a nadir during an exercise ramp for AeT determination.  With a1, we use a value - that's both a blessing and a curse.  The blessing is that we don't need a ramp to failure and could probably estimate from a mixed exercise session.  The curse of course is that we are relying on accuracy of the HRM in getting the RR timing correct and the computation methods of the software.  The process of obtaining the a1 is complex.  The HRV software needs to first "detrend" the data.  This has nothing to do with "detrended fluctuation analysis", AKA "DFA".  The detrending of RR data is done to remove "stationaries".  These are slow changes in beat pattern from other causes.  If they are not removed properly, the DFA a1 will appear more "ordered" than it should be and a bias upward will be seen at very low values (for example a true a1 of .4 may appear as a .6 or higher).  This has been the bugaboo of some of the other software approaches including the initial python related packages.  For instance, Runalyze was somewhat inaccurate before they enhanced their approach to using the "smoothness priors" approach of Kubios.  HRV logger does not use the "smoothness priors" of Kubios fame method either.  The issue is worse for recordings with more stationaries of course - so YMMV.  We saw very good accuracy with HRV logger in the Frontiers study, but in my personal use, it is not there.  After a fair amount of work, Fatmaxxer has been significantly upgraded to use the Kubios method of "smoothness priors".  Despite the calculation load, the speed is not affected even with a re-computation of every 5 seconds.
Lets now take a look at the difference in methods including effects of "detrending".
This was an attempt on my part to see how a1 tracked 15w below then above MLSS:
Comparison of detrending versions:
Old method: 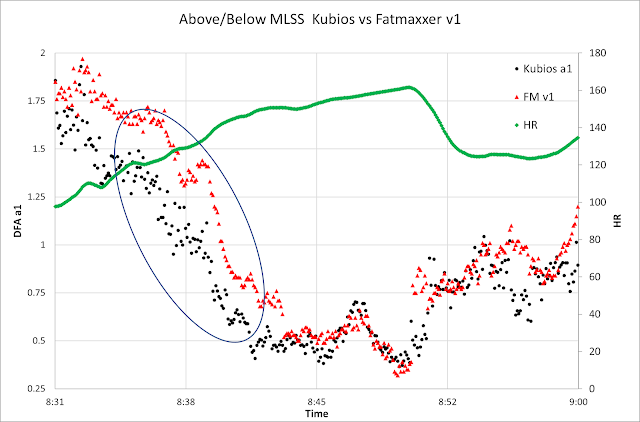 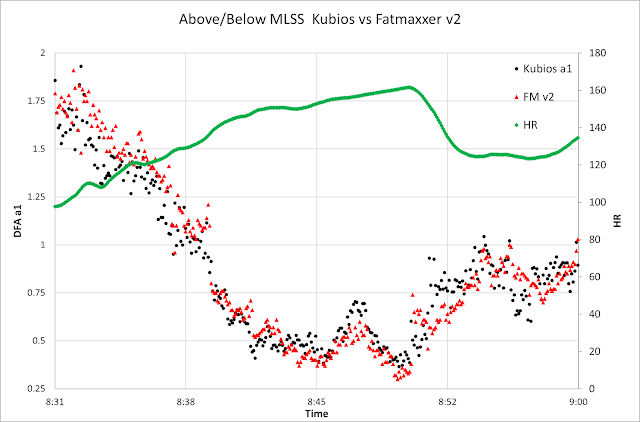 Later on that session, an interval just below the AeT (fatigued)
Old method: 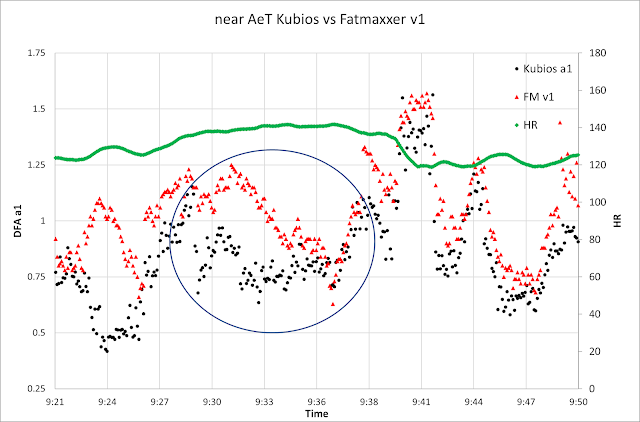 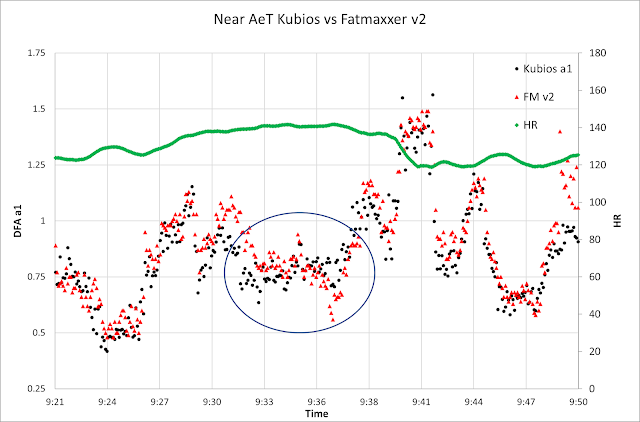 The a1 value matching is far superior with the new detrending method!
I also ran a Bland Altman analysis of the 2 hour session.  There were artifacts and the time matching may be a few seconds off but this gives us a general idea on "agreement".  The graph shows the relative difference at each pair matching.  As an example, let's say at 60 minutes the Kubios value of a1 was .50, if the matching Fatmaxxer value was 20% higher, it would have been .60 - a large difference.
Old version: 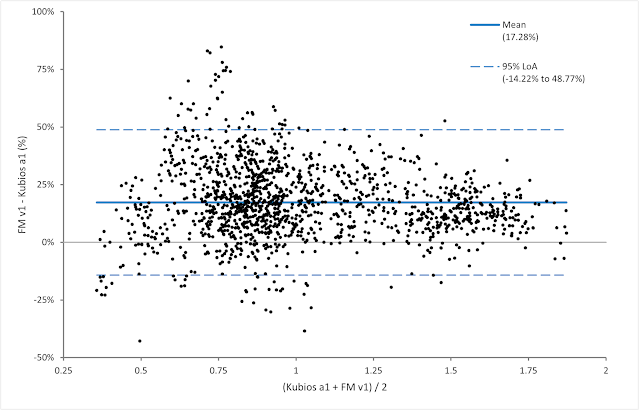 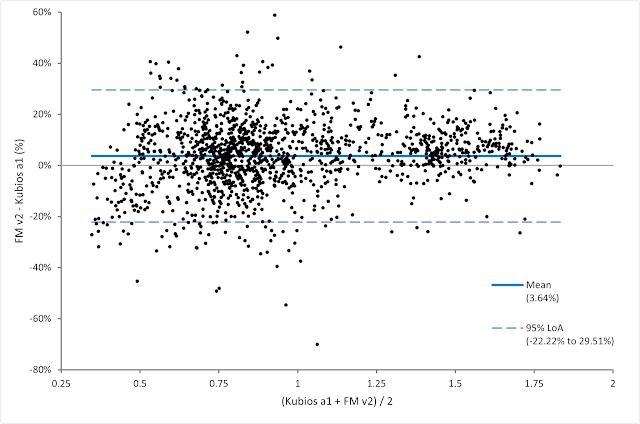 Another example
Here is a ramp done from awhile back during the "heat" tests.
Just showing the new version of detrending: 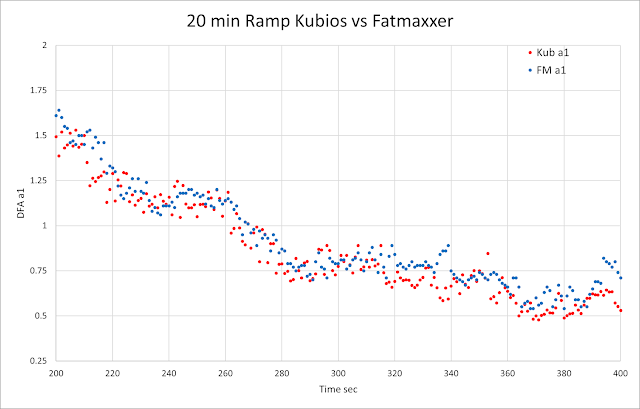 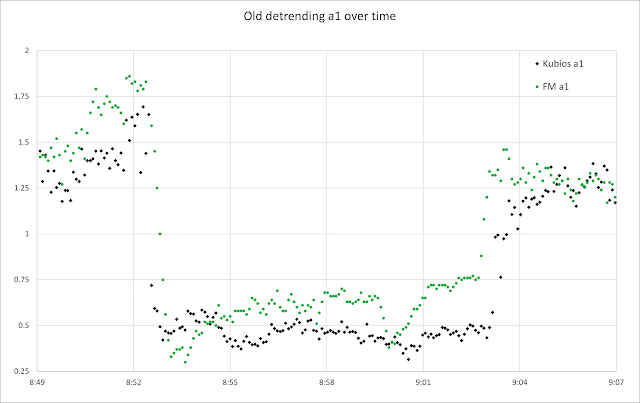 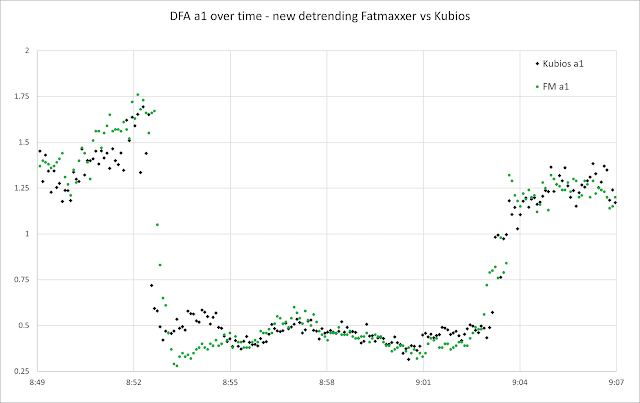 With the Bland Altman graph of the entire 3 hour session: 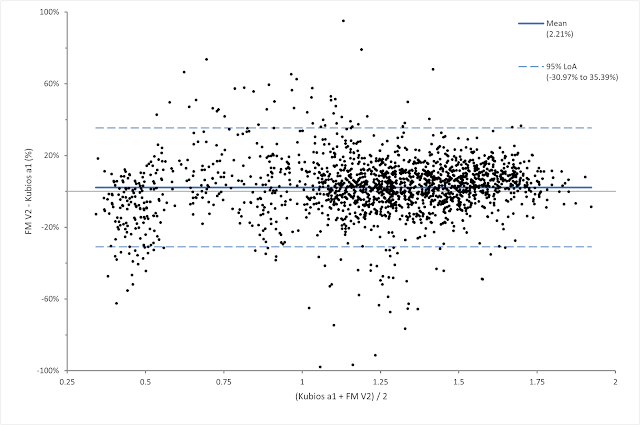 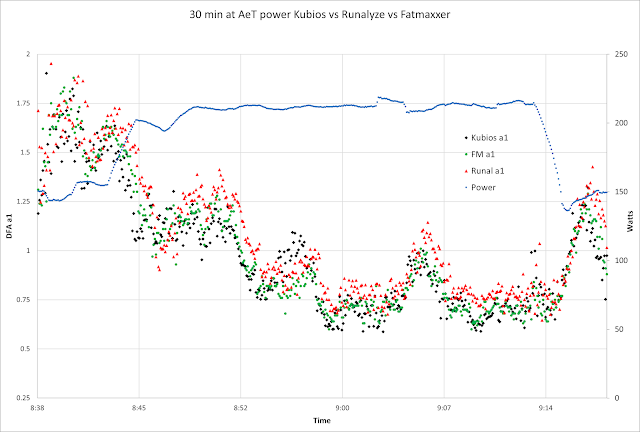 Here was a "rest day" session of 90 minutes done at 50w below my HRVT power.  As noted toward the second half, there were some dips in the a1.  Using the detailed real time display of Fatmaxxer, I was able to reduce power further to keep the a1 up.  Why is this important?  We have evidence that DFA a1 can be a marker of fatigue - and since this was a rest day, avoiding further fatiguing exercise is important. 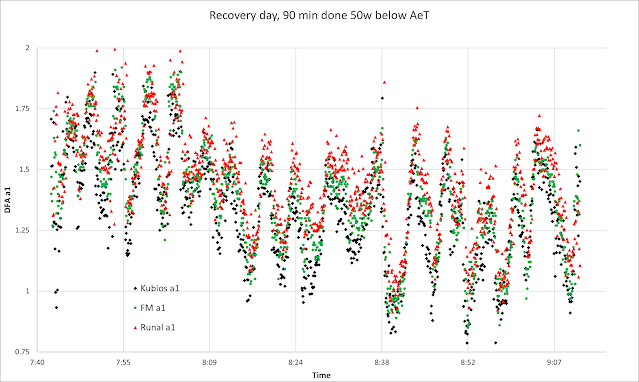 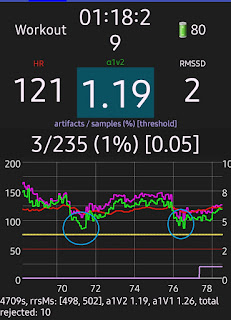 A quick word about the concept of "fatmax" and the aerobic threshold (a full post will be done soon).  This is a concept describing the exercise intensity where the greatest absolute (not relative) amount of fat is being oxidized (burned).  As seen by the diagram below, fat is the predominate fuel at low intensity and decreases as it work load rises. 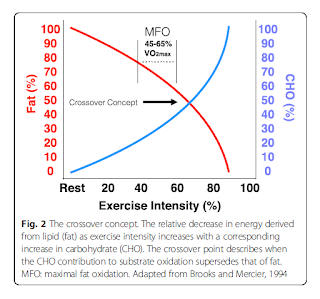 However, since total calorie burn is increasing at higher intensity, the absolute amount of fat used increases even though the relative portion drops - up to a point.  That point is the Fatmax.  There is also a Fatmin - the counter point - the least fat burned (in grams).
A recent look at the relationship between Fatmax and the AeT indeed shows that they are well related: 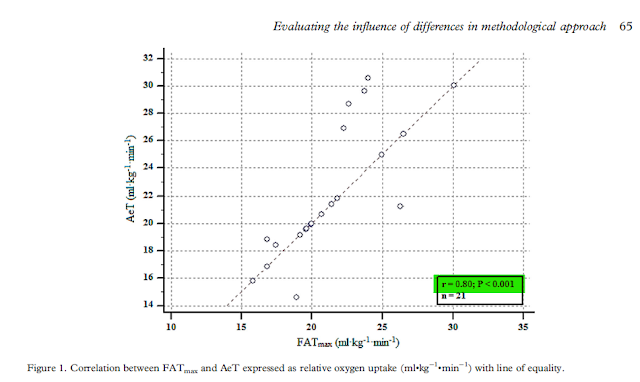 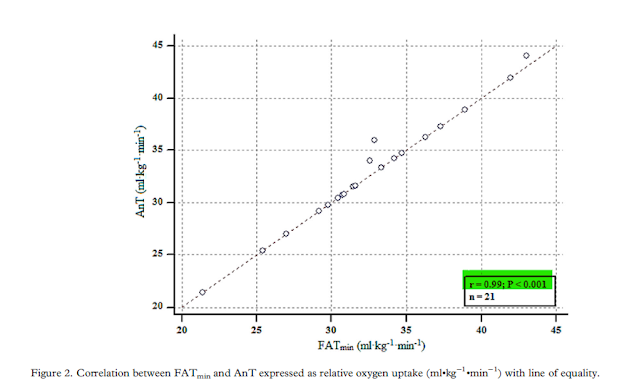 A couple of comments on these curves:
There was not perfect correlation between Fatmax and the AeT - it's very good, but some may have their Fatmax at intensities other than the AeT (usually below).
Exercise at the MLSS/AnT will consume very large amounts of carbs and oxidize relatively small amounts of fat.
It would appear that long bouts of intensity at below the AeT would be the optimal strategy for fat burning - long sessions are possible from the training intensity distribution standpoint and fat burn is both relatively and absolutely high.  Although you may get a bit better burn at the AeT, it may impact your training distribution and cause excess fatigue.