One of the troublesome issues involving the Movesense Medical ECG module has been waveform distortion.  For most arrhythmia identification purposes this probably has minimal impact, however with HRV matters it could be critical.  In particular, the fractal related DFA a1 should be affected by loss of RR peak precision.  The following waveform is what we want: 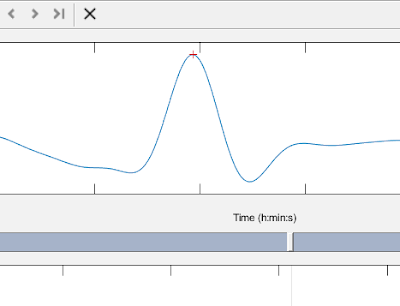 Unfortunately, this is what we can get from the Movesense ECG: 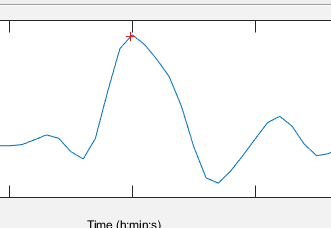 There are many permutations of how the R peak sways side to side - which should create a timing issue for an index of fractal dynamics and self similarity (DFA a1).

Well, I finally figured it out and how to fix it!  I have tried about everything to tame the distortion and noticed that if I held my breath it looked ok.  On the other hand, during a deep inspiration, the wave looked like this: 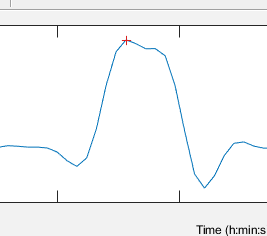 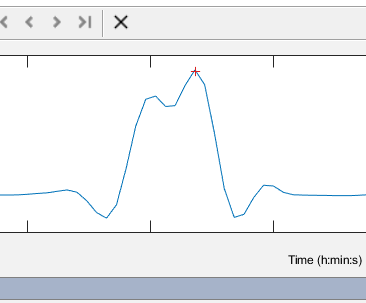 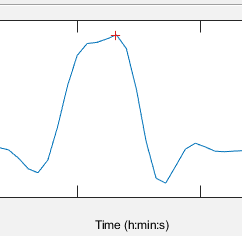 Now we are getting somewhere.  So, some sort of muscular or thoracic motion is throwing off the signal.  What I did next was use the gel electrode kit. 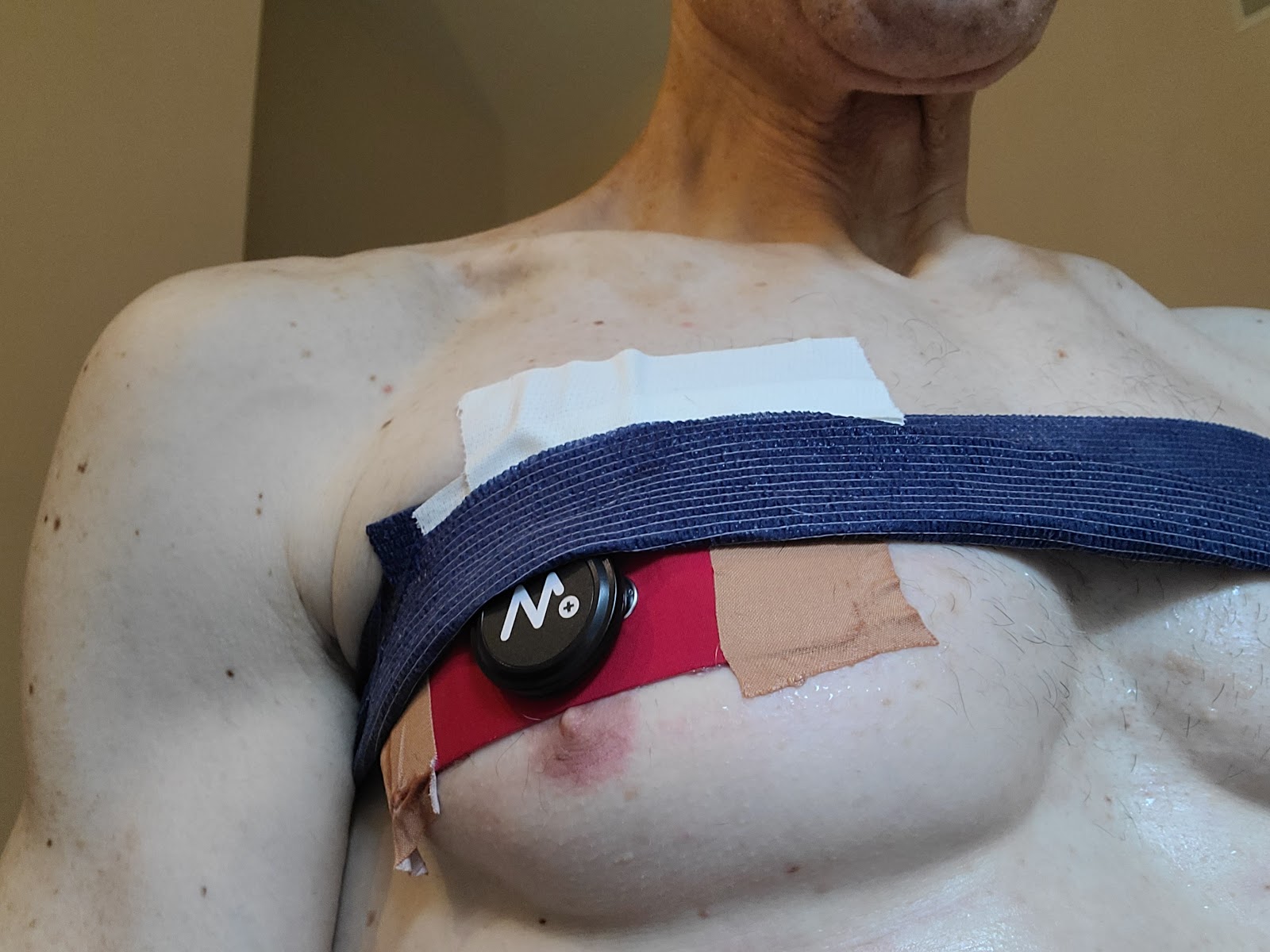 Putting the electrodes high on the lateral upper chest gave me this beautiful waveform (at 250 Hz sample rate): 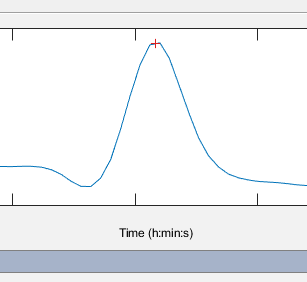 This is almost identical to the Biopac ECG signal above.  In addition, during an hour session of cycling, the signal remained this way - no distortion, sway or broadening.

Next step was to compare the Movesense to the commonly used Polar H10.  I'm not implying that the Polar is a gold standard device, but it's the only other HRM I have (that I trust).

A standard cycling ramp was done - 5 watts/min, 20 minutes, 130 to 230 watts.  The session also involved a 3 minute max, 1 minute max and zone 1 intensity (2 hour total).  To verify proper synchronization of time points, here is a Bland Altman analysis of heart rate.  For those not familiar with the Bland Altman, it's simply the difference between methods on the Y axis vs the average between the methods on the X axis.  The closer to zero the mean line (thick blue) is, the better.  The average artifact for the Polar was between 1 and 6% depending on intensity.  Artifact in the Movesense was near zero for the ramp, but picked up for the sprints to about 5%. 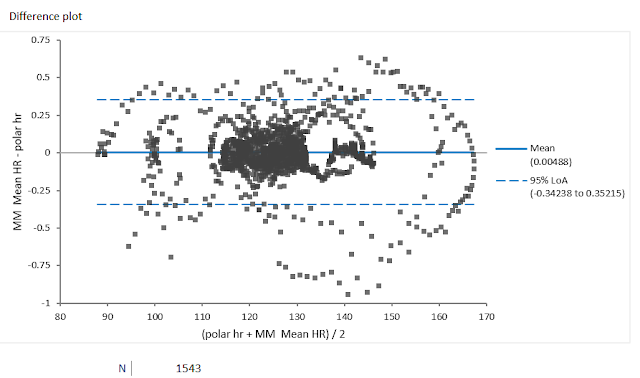 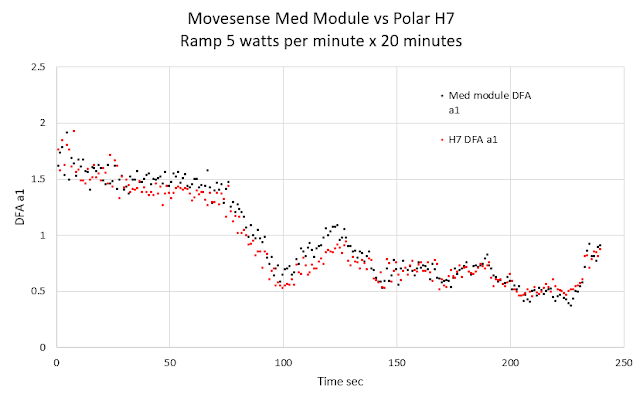 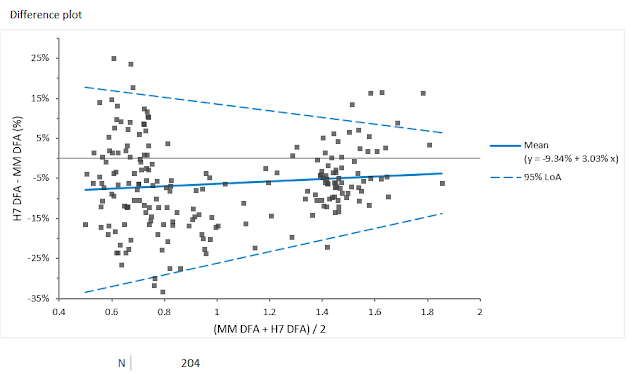 This was not a formal validation study, but you can get a sense that the numbers are close.

Now that we have a solid waveform, a conjecture on why deep breathing (also seen at high intensity) will distort the waveform.  The diaphragm is a large muscle in the right location to interfere with a chest belt form factor ECG.  Some athletes may have more diaphragmatic mass, especially if the muscle is trained on a regular basis.  As per an old post, I have been doing regular diaphragm training for many months.  My suspicion is that this is the culprit in waveform distortion, hence, it should affect only a subset of users.  The fix is to shift the ECG sensors higher on the chest.

Here is an example of a waveform when the chest belt is worn high.  I did need to stabilize the belt with a piece of tape.  This is with a 250 sample rate: 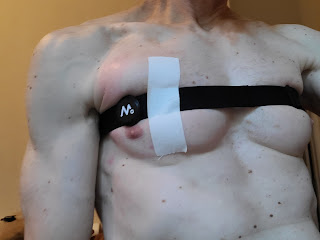 With the resulting wave: 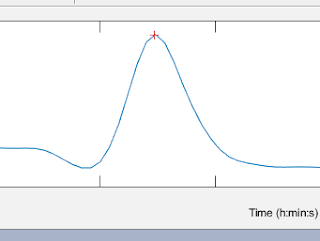