Another look at indoor exercise without a fan

Recently I updated my post on the effects of skin temperature elevation on DFA a1 related thresholds.  Since then, several threshold tests have come my way from athletes who did not use a fan while testing indoors and consequently will have results that won't apply to normal conditions outside.  Today, during some unrelated literature review, I came across a study done almost 20 years ago that is very appropriate and informative to this discussion.

The authors of this study wanted to see what happened to heart rate (HR), lactate and VO2 during a 30 minute cycling session at an intensity near the MLSS - either with and without a cooling fan.

An initial VO2max ramp test was done (with a cooling fan) - then 2 sessions at "MLSS" power - one with and one without a fan.

Tests 2 and 3 were 30-min constant-power tests. After
the warm-up the power output was progressively increased
by two equal 5-min steps until the power output
corresponding to the 4-mmol lactate threshold,
determined from the prior graded exercise test, was
reached. This power output was assumed to correspond
to a quasi-maximum lactate steady state intensity (Heck
et al. 1985) and was to be maintained for 30 min or until
exhaustion, whichever occurred first.

Note - the 4 mmol lactate figure is felt to correlate with performance as does MLSS, but is not the current way to test for the MLSS.

During the preliminary graded
exercise test and during one constant-power test two
fans (40 cm in diameter) were placed in front of the
cyclist to generate laminar airflow around the subject’s
body at an air velocity of 3 m s/1. One fan was set to
ventilate the lower body, whilst the other fan was adjusted
to target the upper body. Thus, one of the constant-
power tests was performed in the presence (AV) of
air ventilation, whereas air ventilation was absent
(NAV) in the other test.

Furthermore, tympanic
temperature was measured (Braun, IRT 3520, Kronberg,
Germany) twice in each ear before the warming up
and at exhaustion, as well as at 10-min intervals during
the constant-load test. The mean of the four measurements
was recorded as body temperature.

Note - older technology and does not segregate skin vs core temp 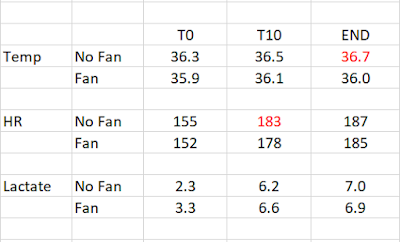 The red refers to p<.05 on t testing Fan vs No Fan
Interesting points:

Not everyone was able to finish the 30 min test.  This is most likely due to the erroneous calculation of "MLSS" based on fixed lactate.  However if we look at the numbers, fewer in the "no fan" finished than the "fan".

VO2/Lactate did not differ between Fan vs No Fan:

This is important!  It tells us that factors other than VO2 or lactate were preventing these athletes from finishing.

And that factor appears to be Temperature (core vs skin is unclear from this assessment):

Over the past few weeks I've used the Core temp monitor to observe skin and core body temps.  I've already presented what happens without a fan in the skin temp post, but wanted to share some additional data points.  Here are some side by side comparisons of skin and core temps, cycling in the Florida summer heat vs indoors (with AC) with a fan: