One of the main features of low load, “hypoxic” training is usage in the face of rehabilitation and injury. In fact, the man behind Kaatsu training initially described the anecdotal use of the method on himself when he was injured in a skiing accident. Despite medical advice to have surgical procedures, he elected instead to resume his blood flow restriction training and actually did quite well.  Over the years, several other reports have been published on the utility of low oxygen environments to stimulate collagen producing cells, bone tendon junction healing, strength of engineered tissue as well as improving vascular networks, satellite cell production.  In addition, other case reports of blood flow restriction improving tendon/ligament injuries have appeared.

We should spend a moment to differentiate between blood flow, blood volume and O2 saturation actually in the tendon itself.  This is not the same as muscle O2 sensor data seen here.  It has been looked at in the literature, but not as often and it is not easy to measure.  The sensors mentioned here are not suitable in size (or probably in calibration) to look at Achilles or quadriceps tendons.  Having pointed this out, lets look at the most recent data on this subject.
One of the main groups that have looked at this just put a paper looking at the effects of isometric contraction of the Achilles tendon in normal men.  They looked at either a single 1 minute contraction at 10, 30 or 50 % maximum force as well as 5 sets of 50 reps (1 min rest per set, 1 sec per contraction) at 70 % maximum.  The tracings for the 1 min contraction are below:

There is a small O2 drop, and a decrease in both blood flow and blood volume.  This was felt to be similar to the muscle phenomenon seen with an increase intra tissue pressure(from higher tension) resulting in vessel occlusion.
They then looked at the recovery phase of repeated sets of contractions.  As previously noted in muscle, there will be an increased O2 and hemoglobin overshoot.  In the tendon this did occur as well:


The summary from the discussion:
In conclusion, the present study showed that 1) BF in
the tendon was already interrupted during contraction
at lower force levels, whereas THb during contractions
slightly decreased with increases in the torque level and
2) the increased BF in the tendon as well as THb and StO2
after repeated contractions were maintained until the end
of the recovery period
Bottom line:  Blood flow, volume and O2 changes do occur in the tendon at the relatively low loads of the type we are using.


Practical Aspects
In order to optimize this method to best encourage a connective tissue/muscle injury to heal, several factors should be considered.  In regards to the load, it appears that even low loads will be quite helpful (and of course heavy loads are ruled out on the basis of common sense).
So our rationale for low load training in regards to loading is valid considering the evidence.
The second parameter under our control is the hypoxic stimuli we induce.  Depending on the area of interest, proper targeting of tissue hypoxia would be the goal.  For instance, a Lateral Epicondylitis (tendonitis or tennis elbow) would be addressed with putting the O2 sensor near the area, finding an appropriate exercise of low load and doing several sets, observing the reduction in O2 sat and figuring out how best to balance the variables involved.  Having the sensor is an advantage in that better desat may occur with shorter rests between sets, a lower load than predicted, purposely keeping range of motion low to maintain tension in the area (limiting blood in/outflow) and choosing the most targeted exercise. For example- As noted in the last post, the bicep is poorly targeted by the row but easily hit by a simple curl.  So lets examine targeting of the lateral epicondyle area with either a pulldown or a standing cable external rotation.  I was interested in how deep the desaturation could get with the least amount of force.
The following are results of putting the sensor on the extensor muscles of the forearm.
I did a Freemotion cable machine external rotation exercise, then a pulldown (Matrix) 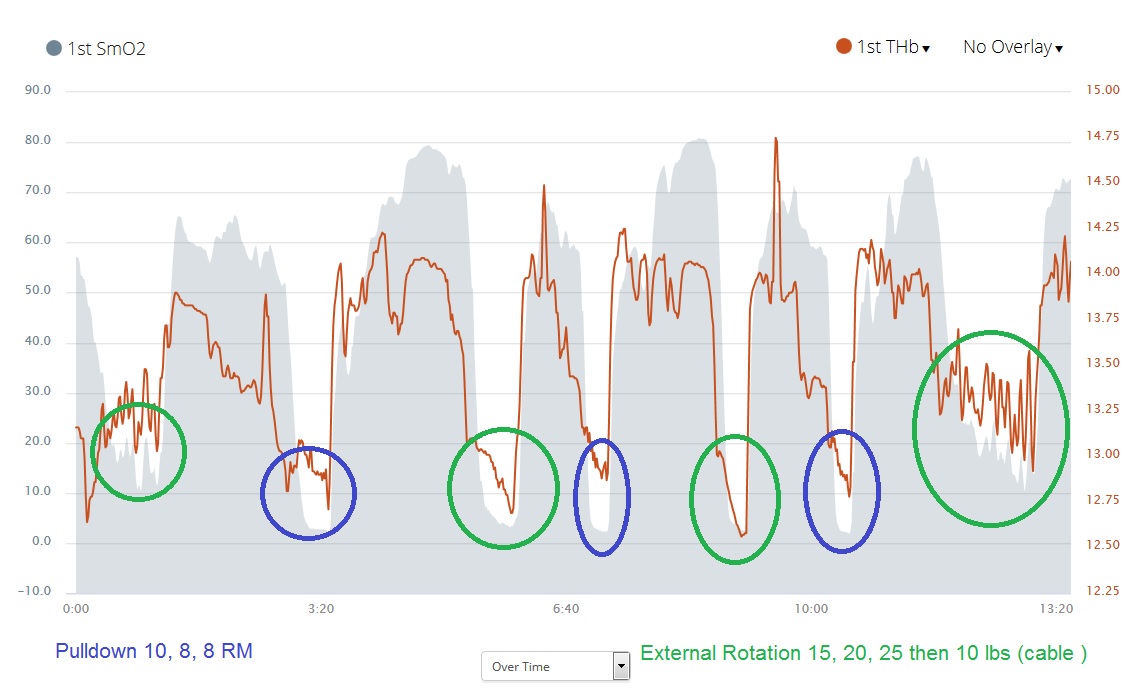 Remember this is in one one subject(me), and may be different depending on placement, muscle mass, skin thickness etc.
Part 2 - Stretching, with emphasis on creating transient hypoxia.
Incorporation of various stretching routines have been part of physical therapy practice for decades. Interestingly, there is a good body of data that shows non trivial desaturation in the muscle being stretched.  This may (as above) initiate chemical cascades of repair substances.  So even though no work (in the physics sense) is being done, the muscle/tendon complex is under tension, and getting desaturated at the same time.
A recent study looked at this phenomena and found excellent desat with stretching.


At max stretch efforts, the desaturation was about the same as intense cycling in that particular muscle.


Furthermore, a followup investigation showed that the degree of desaturation was related to the degree of stretching force(the graph is showing deoxyHb, so higher values equate to lower smO2).
The CTS group represented the more intense stretching, LIS is the mild and CAS moderate.

I decided to look at the same comparison.  With the sensor on my L rectus femoris, my best desat with intense cycling is about 30 to 40% depending on the day tested (baseline 65%).  As seen below, the oxygen saturation drop is comparable with intense stretching lasting about 2 minutes. 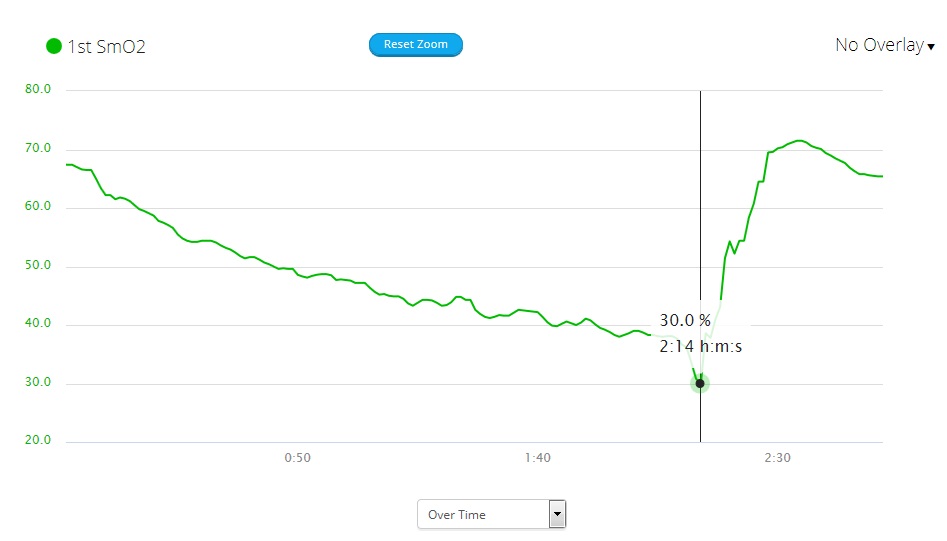 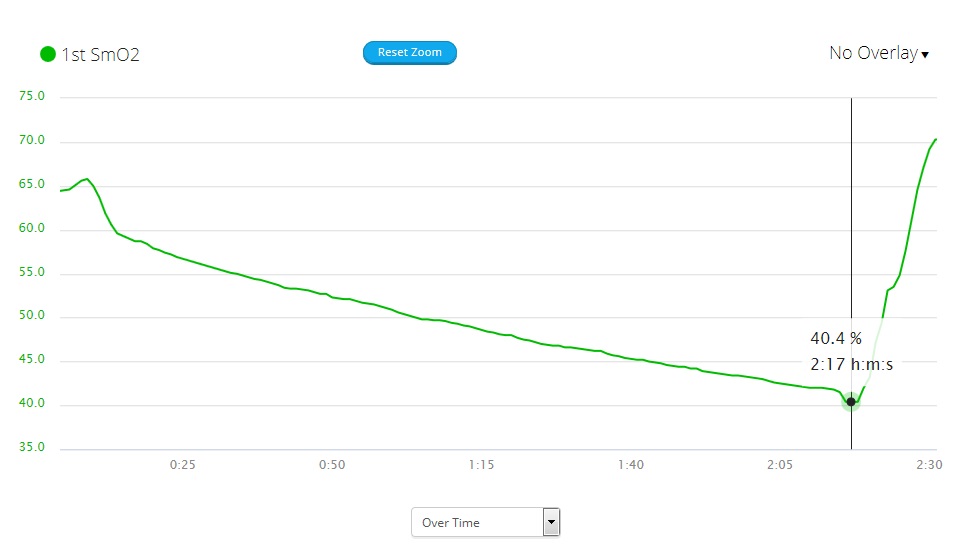 One wonders what cascade of repair mediators could be potentially released by stretching induced hypoxia.  There is also a rebound in saturation, possibly improving blood flow at least temporarily.  In the study quoted above, the mechanism of oxygen drop is discussed and it is not well understood.
Also note that the oxygen saturation is not being measured in the tendon/ligament itself, but in the nearby muscle.
In addition, a study looking at comparison of stretch parameters (frequency, load, time), showed that infrequent (> 6 hrs between sessions), shorter periods (less than 10 min) of mild loading were most beneficial in regards to collagen synthesis in engineered ligaments.