Update-
Movesense Medical ECG - improving the waveform and HRV accuracy
DFA a1 - running ramp and sample rate observations with the Movesense ECG
DFA a1 agreement using Polar H10, ECG, HRV logger
Over the past several weeks I have been testing both the Movesense Medical module as well as the Heart rate plus device to see if they can track the non linear HRV index, DFA a1 accurately during a 20 minute incremental ramp.  The ramp protocol has been discussed before - after a 20 minute warmup, begin with a starting power at 130 watts then a 5 watt per minute rise up to 230 watts ending at 20 minutes (100 watts over 20 minutes).  In the past my DFA a1 .75 value has been consistently in the 170-180 watt range with a heart rate about 130.  My intent here is to compare the Polar H10 to the Movesense Medical as well as the "Heart rate plus" modules to see if they are in that ballpark.  Although it is difficult to wear two chest belts simultaneously, it can be done - but be prepared to throw out some results if they slide into each other (and cause too many artifacts).
First off, it's been an interesting journey.  The initial results with the Medical module were not consistent,  occasionally having corrupted output files, abnormal ECG wave structure and HRV results that did not make sense.  Some of the difficulties involved using too high a bluetooth sample rate.  Although I have been able to get 500 Hz to work, it is less reliable than 250 Hz.  However, even with a good sample rate and bluetooth transmission, the ECG waveforms were not normal originally.
Here is an example of what the QRS should look like (taken from a medical grade 1000 Hz ECG): 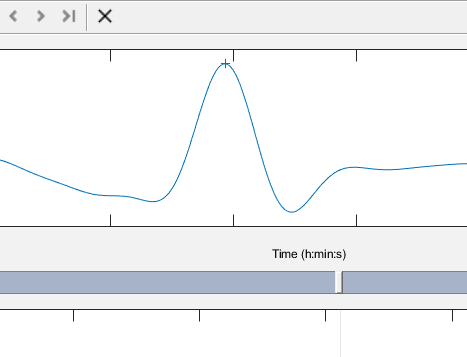 Now for some samples of the Medical module:
This is a bad waveform with a deviation to the right recorded at 500 Hz: 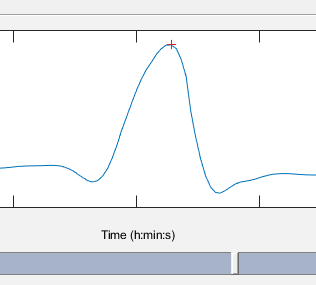 This is a good waveform with a sample rate of 500 Hz: 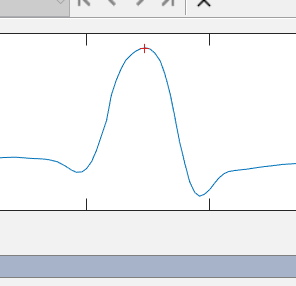 Does sample rate matter?
There have been several publications examining the importance of sample rates for HRV and even DFA a1.  They do not indicate huge disparities in results comparing rates of 128 and 1000 Hz.  But, they have been done at rest and no study has looked at what happens during exercise.  The problem with lower sample rates is that the waveform loses some smoothness and definition.  Remember, with the lower sample rate, less information about the wave structure is present.
Here is a 200 Hz sample from the Medical module: 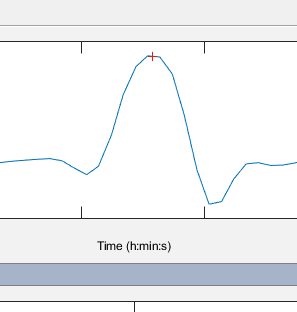 Of course, if we zoom out (on the 200 Hz Movesense above), the structure looks fine:

My concern was that the lower sample rates could affect an index of self similarity (DFA a1) if the level of fine detail was lost.  In addition, the distortion of the wave (tilt left or right) could also lead to some change in the RR timing.
The software engineer in charge of the Movesense Medical device was kind enough to work with me on this issue.  After some adjustments in preprocessing filters (new firmware), both the waveform and bluetooth transmission seem better.
One of the interesting subjects I was introduced to was the effects of pre processing on the final wave or RR.  Depending on the device, internal software, hardware filtering, and processing, the final result could be quite different.  For starters, the Heart rate plus device, although capable of ECG display, does not have the on board hardware and software that the Medical Module has.  This leads to a potential issue in HRV accuracy as we are about to see.
Ramp results:
DFA a1 curves generated from each device as a pure RR sequence to a Garmin watch:
Both devices may have similar RR acquisition and processing (when not in ECG mode) with an internal sample rate of 125 Hz.  The following was recorded using each module as just a heart rate unit with a Garmin watch receiving the bluetooth signal of RR time (like a Polar H10).
Heart rate plus: 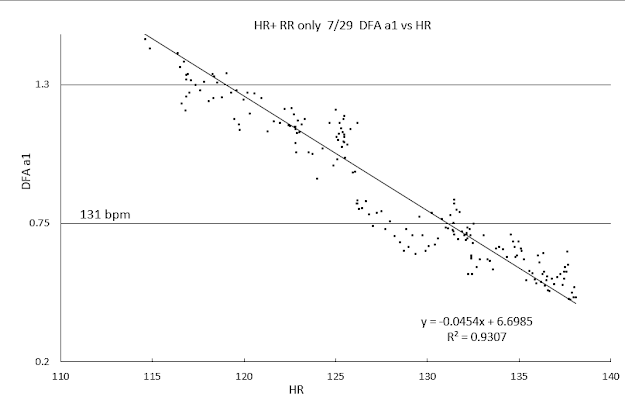 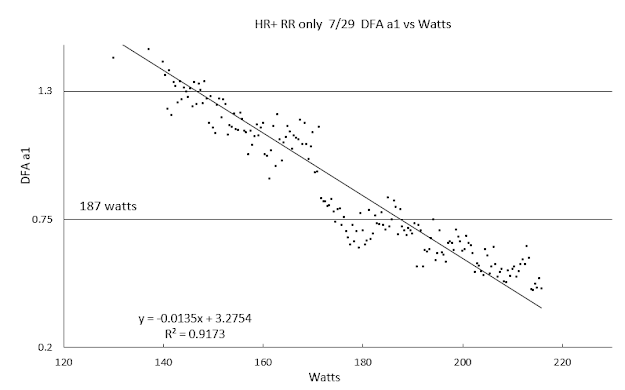 Here is the same ramp done using the Medical Module: 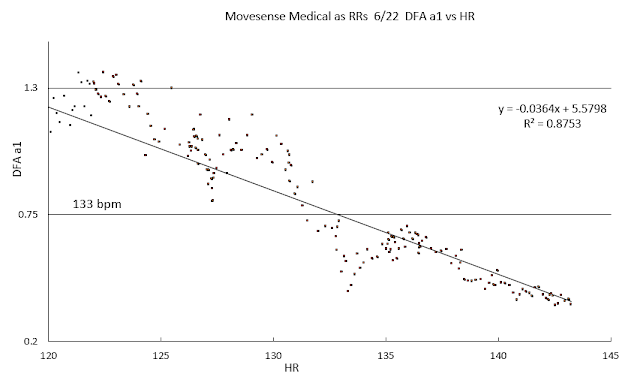 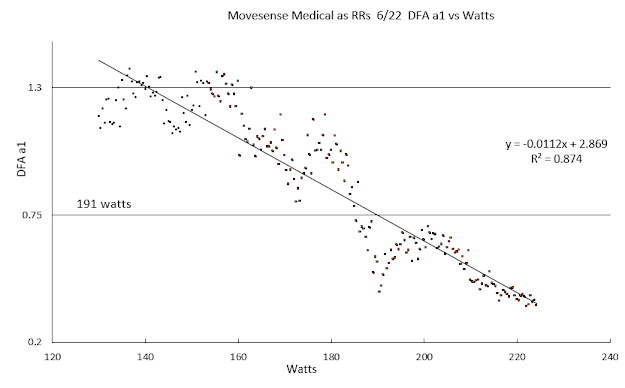 The nice thing about both ramp recordings was the absence of any lost beat artifact: 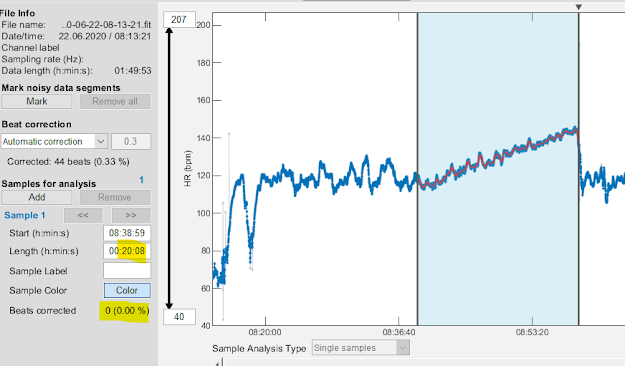 For comparison, here is a Polar H10 recording session (on a different day): 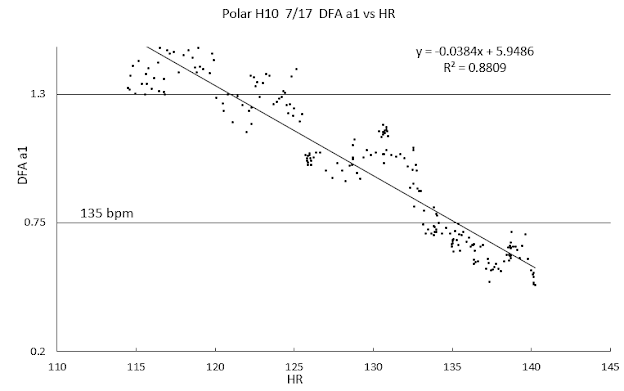 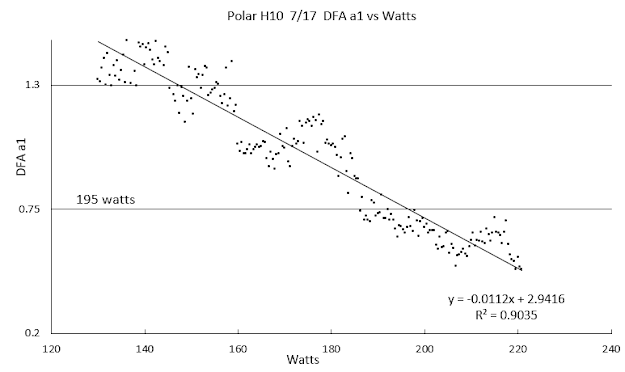 The artifacts were about 1.5% overall, but more prevalent toward the middle - end: 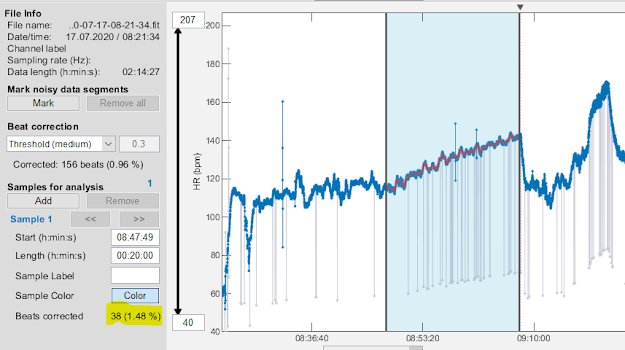 ECG recording from both the Medical module and Heart rate plus:
As opposed to RR times series, the following uses the ECG waveform to determine HRV
Heart rate plus, ECG recorded with a sample rate of 500 Hz: 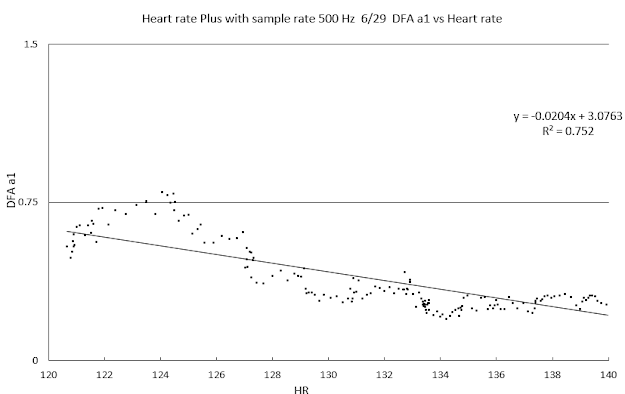 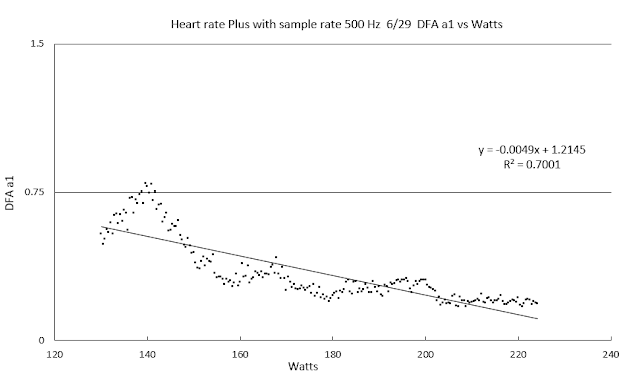 Why?
Lets look at the raw waveforms in Kubios: 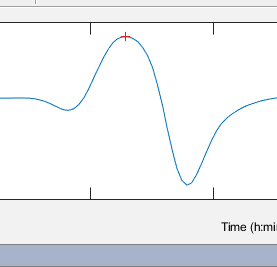 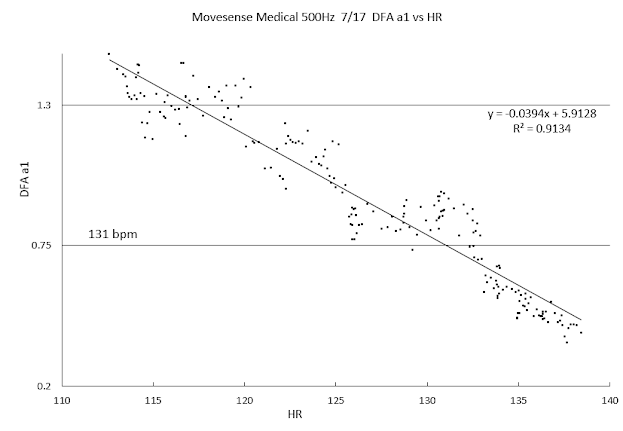 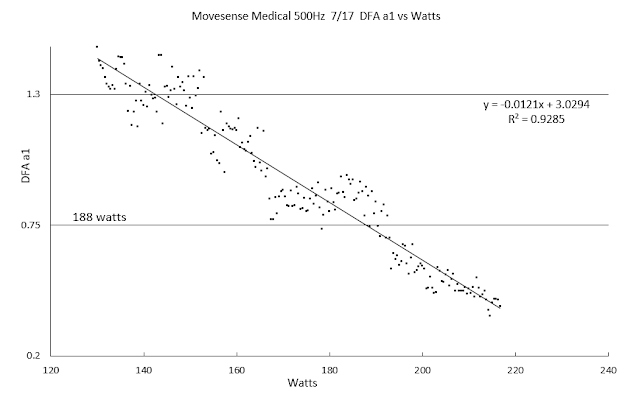 Movesense Medical module - Waveform in Kubios:
Here is a closeup.  The waveform is smooth and has a sharper peak than the Heart rate plus unit.

Ability to identify arrhythmia or artifact: 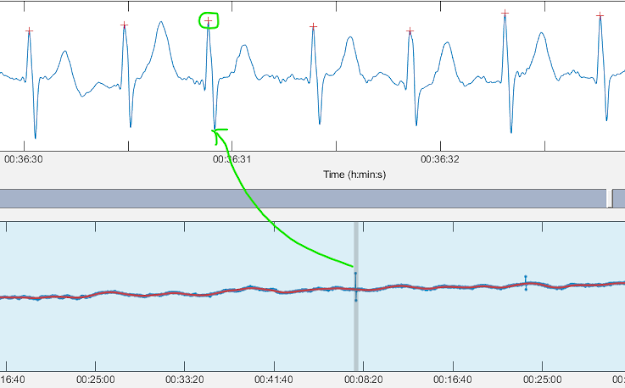 Usage under extreme body motion:
I decided to torture test the Medical module.  In this scenario, I performed 3 sets of body weight push ups, 45 seconds per set, only 15 seconds rest between sets (total 3 minutes).  Since the overlying muscles will be very active with their own EMG related electrical activity, this should provide some information on how good the signal filtering mechanism is in the Med module.
Here is the start of the series of push ups (the orange line, red arrow)

Notice how the background noise appears on the baseline signal:

But despite this, the entire series does not have any missed beat artifact:

For instance, here is a 3 minute cycling interval at VO2 max power, followed by some easy pedaling:

Back to the Medical module during push ups - Arrhythmia identification
There was one APC in the series, easily identified: 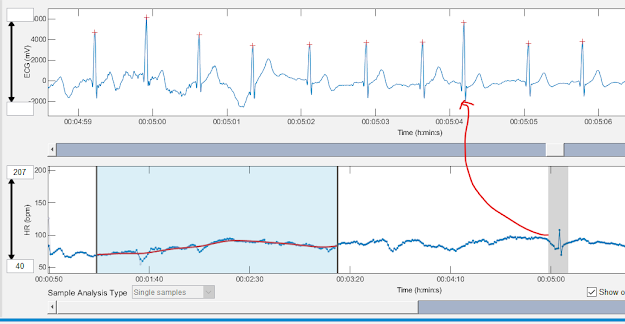