Over the past few years numerous cycling ramps and intervals have been presented in this blog.  About 6 weeks ago, I attempted to do a ramp on my "dumb", fixed resistance turbo trainer consisting of 30 watts per minute rise, beginning at 100 watts.  Despite my long standing familiarity in performing ramps, there was major difficulty in ratcheting up the power evenly, especially at the higher values.  This was related to several reasons including the need to constantly watch the average lap power (each 1 minute) as well as pressing the lap button (disrupting my power flow) and shifting gears.  Sure, doing a series of 5 minute ramps with 25-30 watt differential is doable, but 20 watt per minute is not going to be easy and 10 watt per minute may not be possible.  I had previously heard of "smart" trainers that would automatically change resistance and "clamp" your power within a narrow range.  This seems ideal in theory, and in fact most physiology laboratories utilize similar equipment.  Here is an example of a lab grade cycle ergometer: 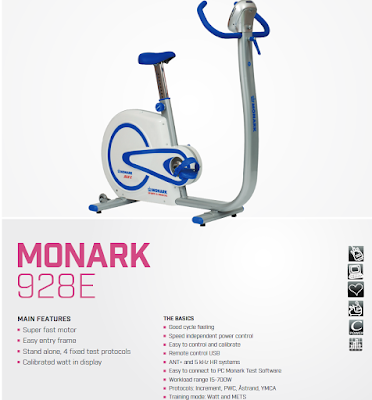 This particular model is about $3000.  Forget the price a moment, does this look comfortable to spend time on?  The pedals have no clips and the upright body position could lead to false ergonomics.  We just don't ride this way!  So if you did testing on this bike, the results don't necessarily translate to real world riding on your own bike.

Can we do as well from the "watt clamping" standpoint with a smart trainer?
Let's explore that question.

Before looking at what a smart trainer can do, a look at manually doing a ramp on a fixed resistance trainer is important.  Although I've done them before, it is very difficult to keep steady power, watch your interval time, shift gears and hit the lap buttons to do it well.  Here is a typical attempt on my part, of a 30 watt per minute ramp (20 watts per minute would be much more difficult):

Although I did ok on the cadence, I needed to constantly shift gears, which caused difficulty maintaining a steady power output.  Notice the very unstable power readings especially at the high wattage.

Worse, is the average watt per interval.  Here is a listing of each stage with the desired targets in red on the right:

There were substantial differences in target power, worse at the higher rates.
Coupled with the already uneven pacing pattern, the physiologic results of this session would be untrustworthy to say the least.

Can we do better with a smart trainer?

One of the more reasonably priced "smart", electronically controlled trainer options (about $800) is the Elite Suito.   If you are interested in other models, that's fine and many trainer reviews are available.  I was happy with the Elite Muin basic model I had before and decided to stick with Elite. 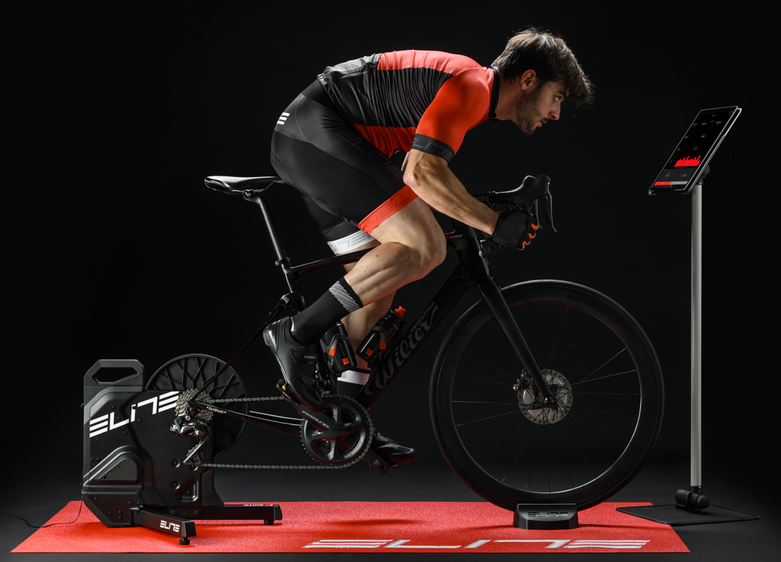 It's quiet, has great road feel (even with Powercranks) and comes already set up.  Just pull it out of the box, spread the feet and go.
The trainer needs to be controlled with software if you are interested in either physiologic testing or doing fixed power workouts.  I have tried both the Elite app as well as Zwift.  The Elite app is a no frills program for your phone or laptop.  Both apps allow you to use your own power meter, so there is no reason to rely on the less accurate trainer meter.

Here are a couple of screenshots of the Elite app, the first was the creation of a custom ramp, beginning with warmup, 100w start then 20w per minute until stopping (near exhaustion). 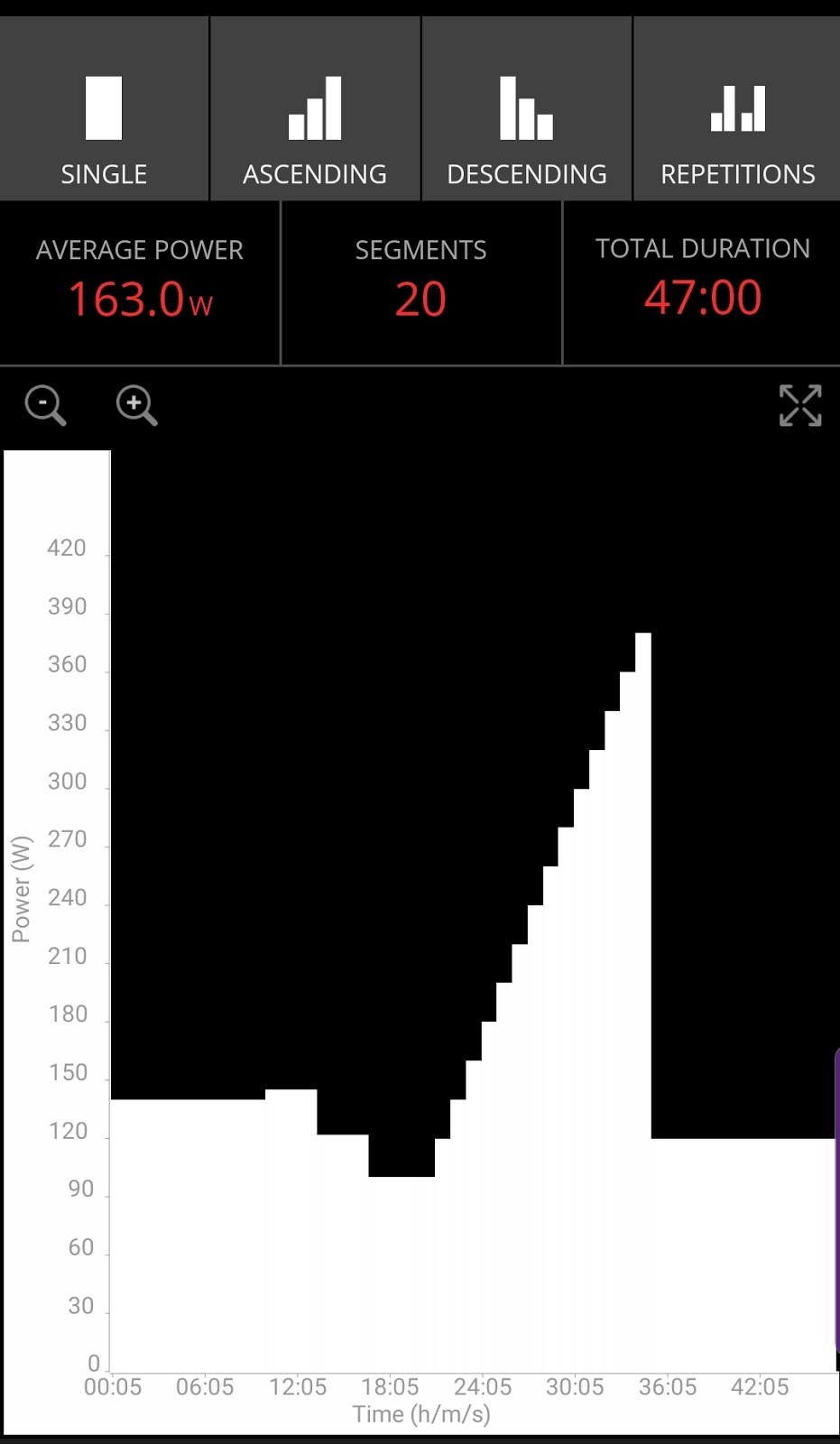 And a screen of custom workout choices that I designed: 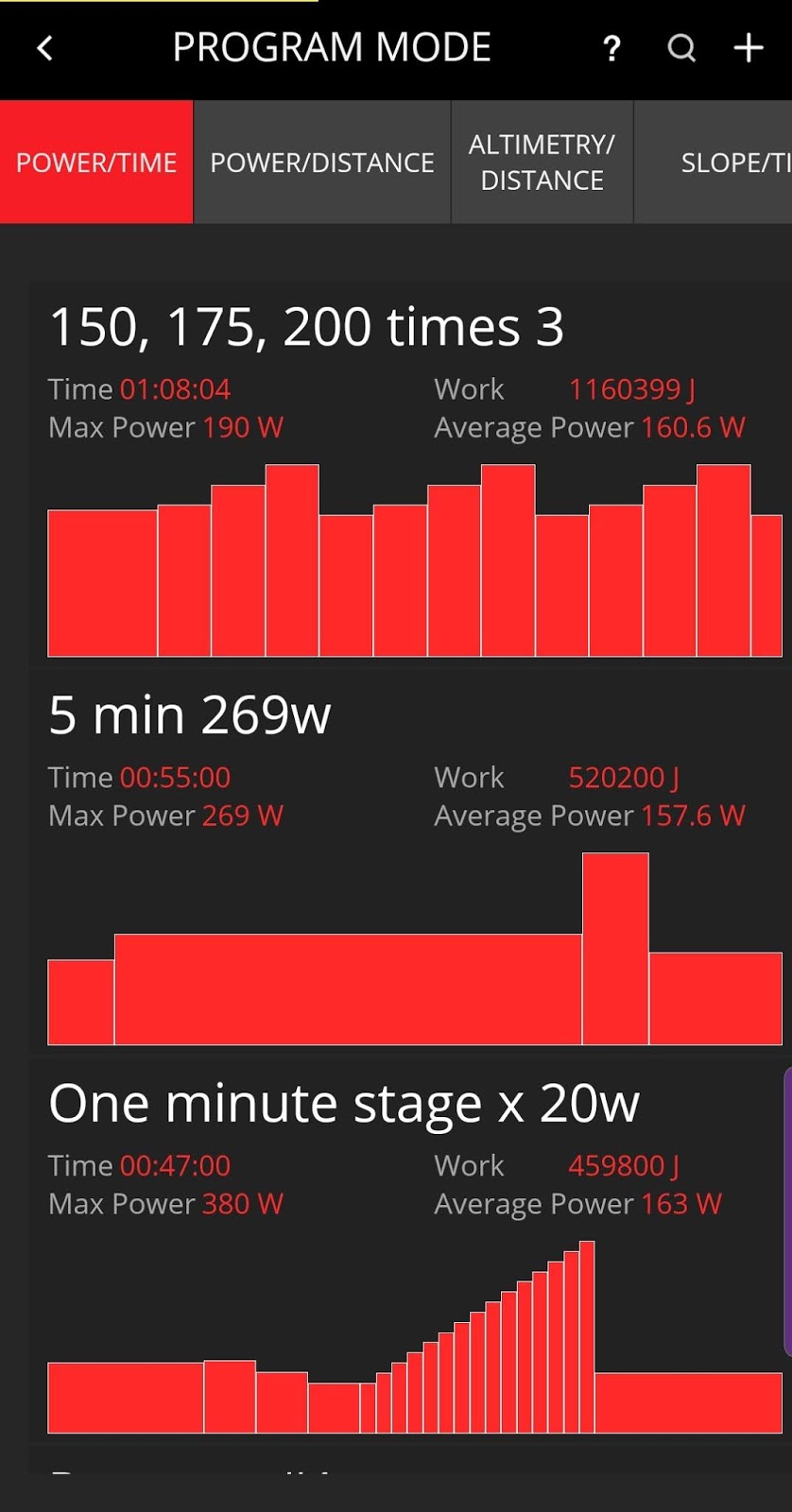 How did the 20 watt per minute ramp look?
Here is the Cyclinganalytics.com display: 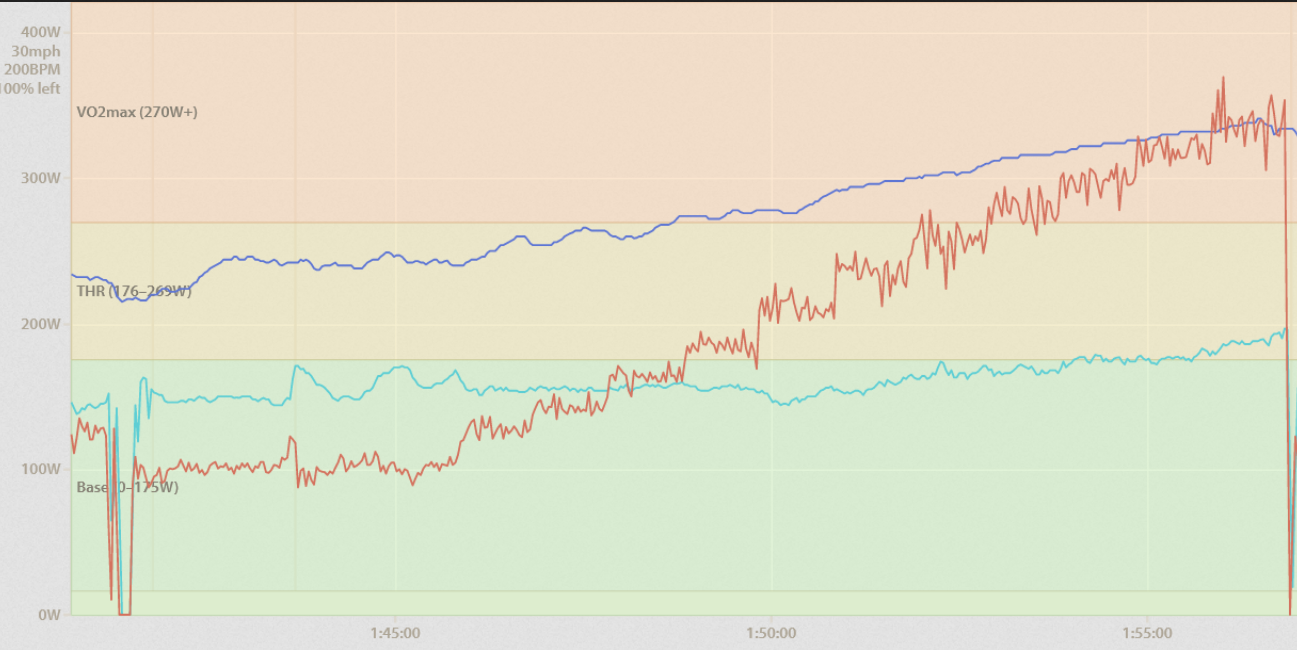 With the 1 minute splits (the desired watts are in red on the right column):

Although the average is close to desired, it does deviate somewhat above 200 watts.
A clue to this is the rise in cadence. 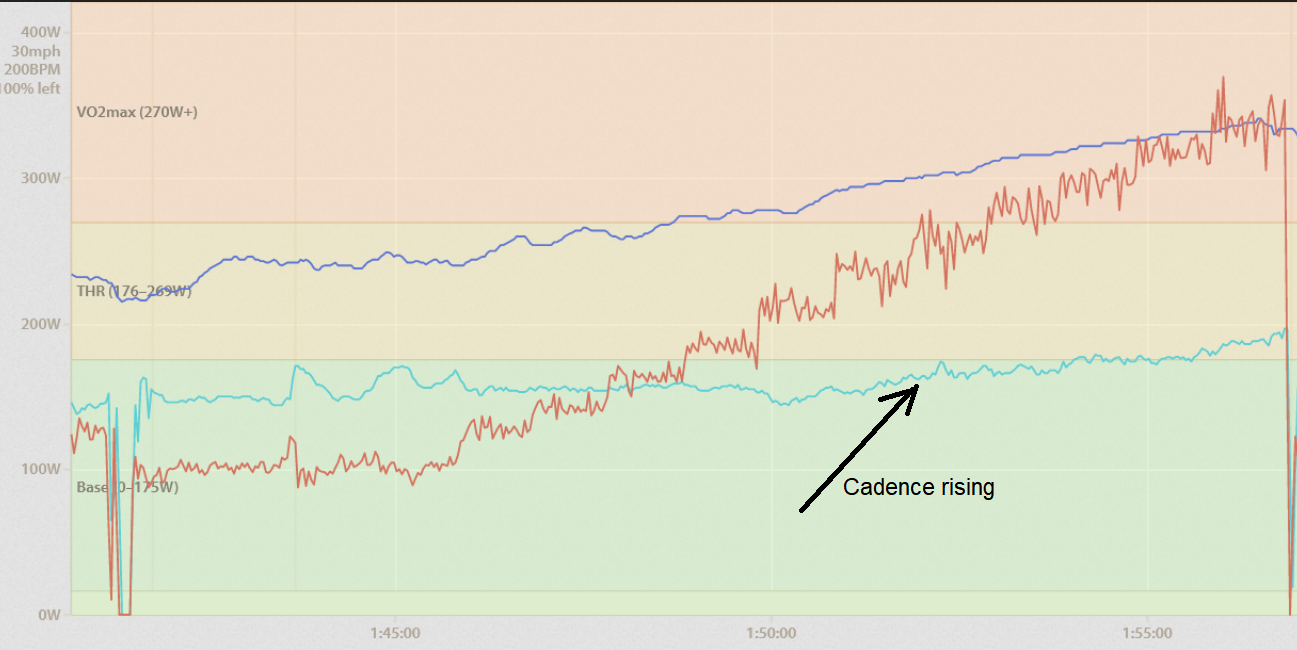 Although the trainer should reduce resistance as cadence rises, there will still be some resistance-time lag and that is probably why I was 20 watts too high at the end.  Still, the results are reasonable, and with some practice (stable cadence) could be even closer.  This is certainly better than the manually done ramp (which was 30w per minute).
Can the smart trainer maintain strict enforcement of interval power?
This was part of a series of repeats of 145, 155, 175 and 195 watts.  As indicated, the cadence and power were near perfect.  Stable cadence and square wave power were the result.

Comments on the Elite training app:
Zwift usage:
There is ample literature on using Zwift, the erg mode option and workout creation (so I will skip that).  What I will review is my own observations and comparison to the Elite app.
However, make sure you are in erg mode when doing the test ramps and intervals.  This mode provides a clamp on power by varying the pedal resistance. A higher cadence will cause the app to lower resistance, providing the same net power output.
Zwift is partly entertainment.  The graphics of a virtual ride are excellent, there is potential real life pedaling resistance up inclines (non erg mode), you can earn points, pass virtual riders plus acquire virtual gear (for the gamers out there - think Diablo armor).
Designing workout and test protocols on Zwift is very easy.  There is a "create custom workout" option (not on the smartphone app, only the laptop/PC version).
Here is what  the workout creator looks like: 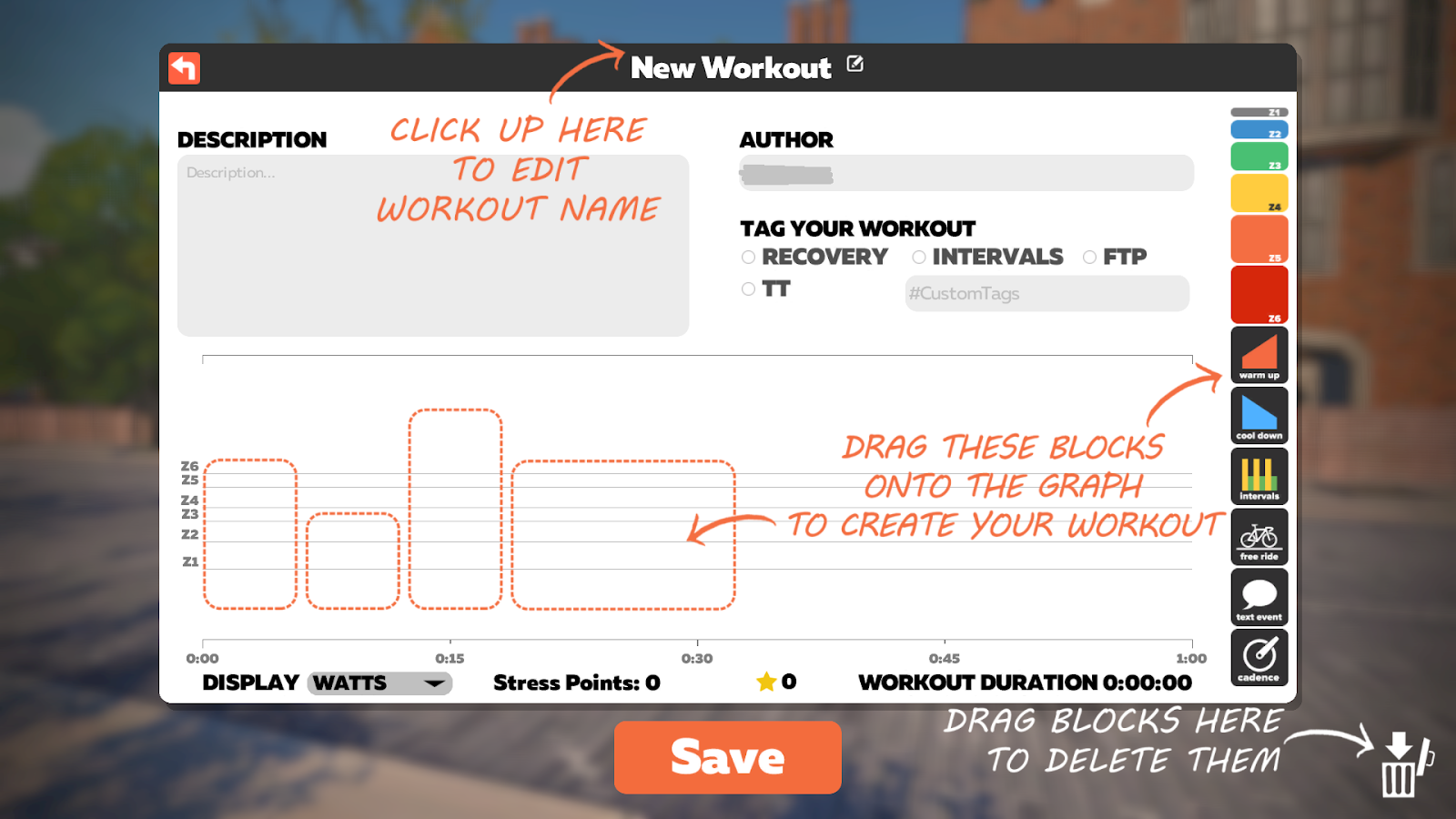 And here is my new custom ramp of 10 watts per minute, ending at 300w: 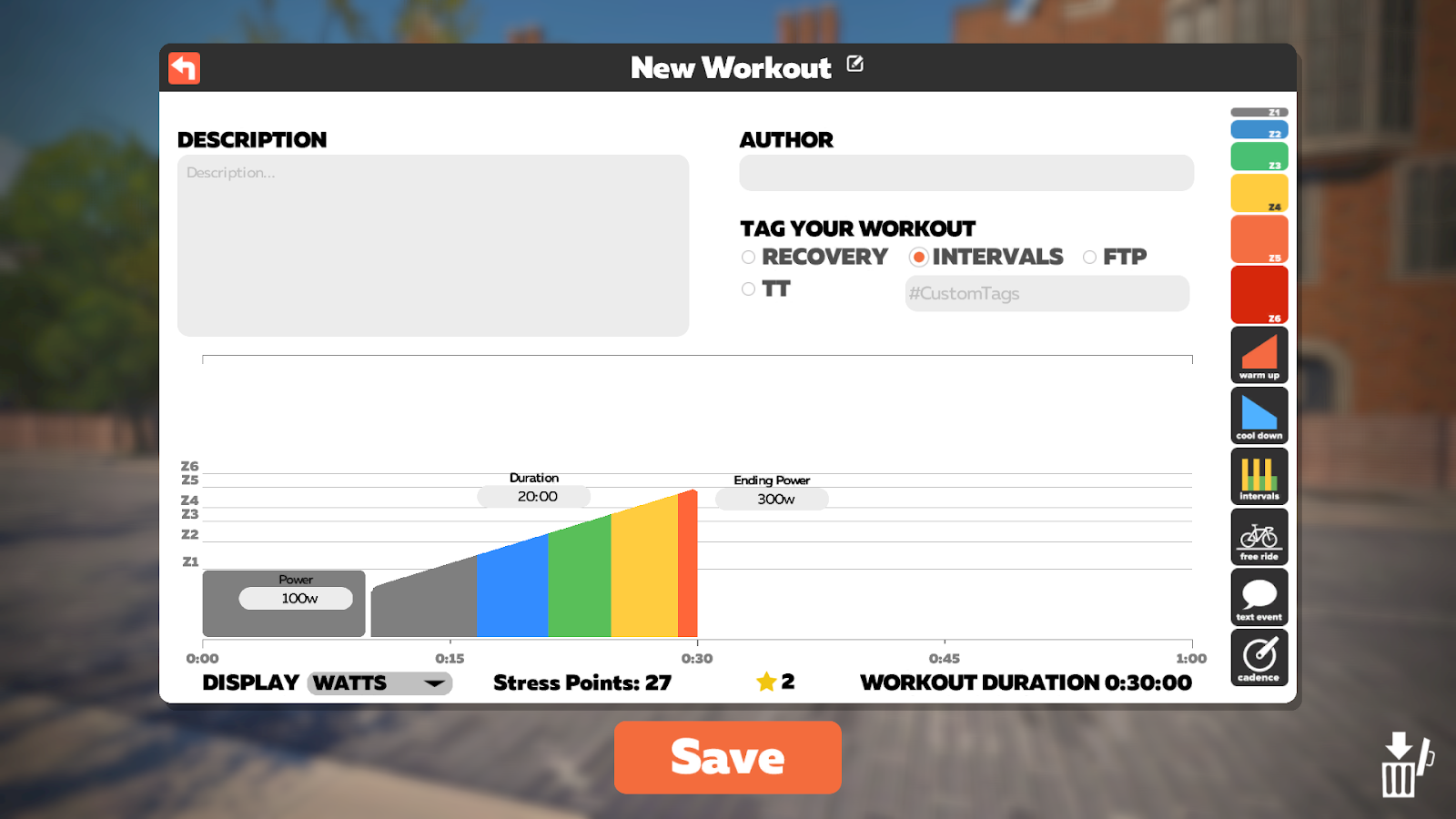 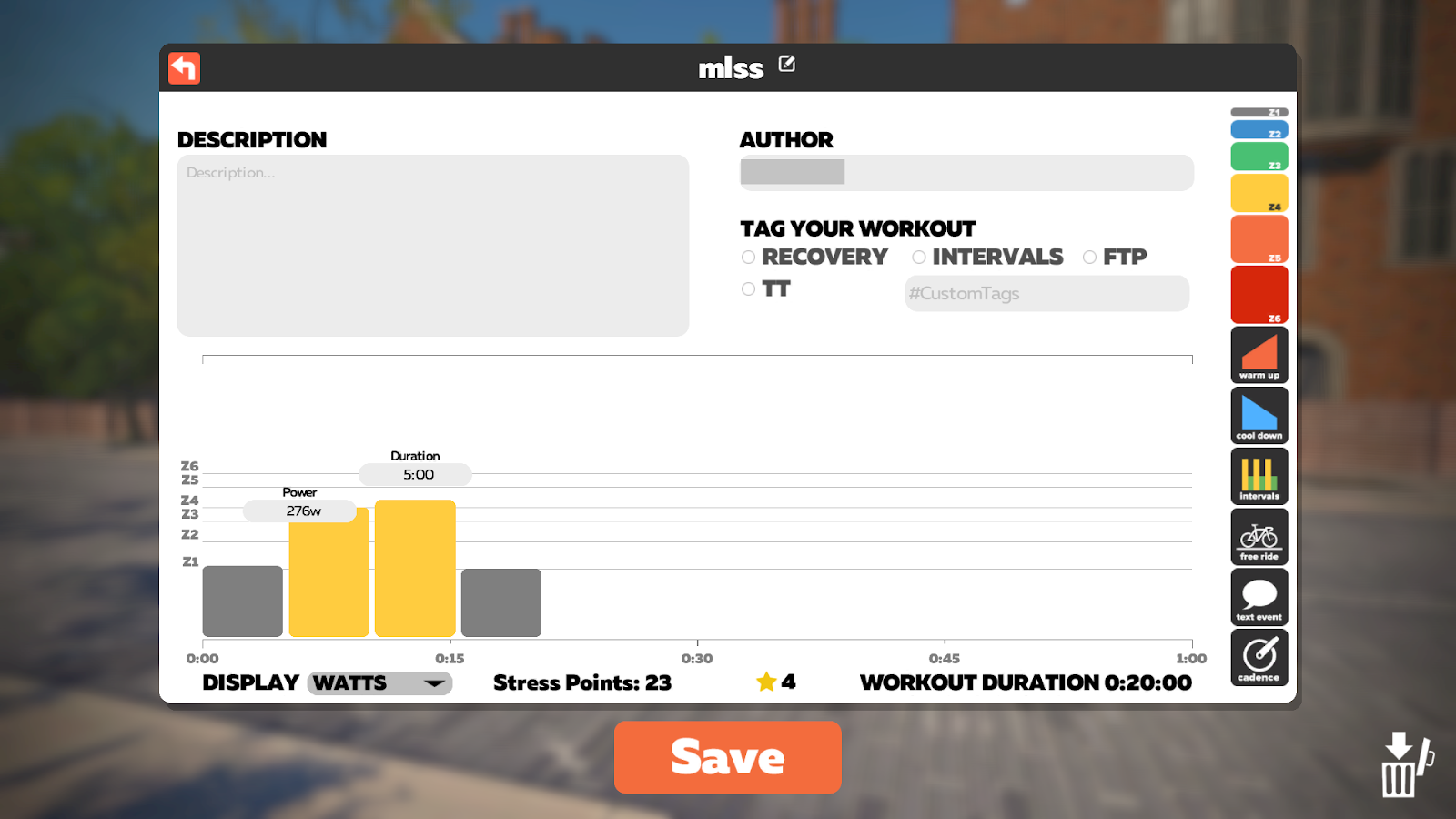 Real world output result:
Looking at the pair of 5 minute intervals, the first is spot on the target and the second is only 3 watts higher (<1%) 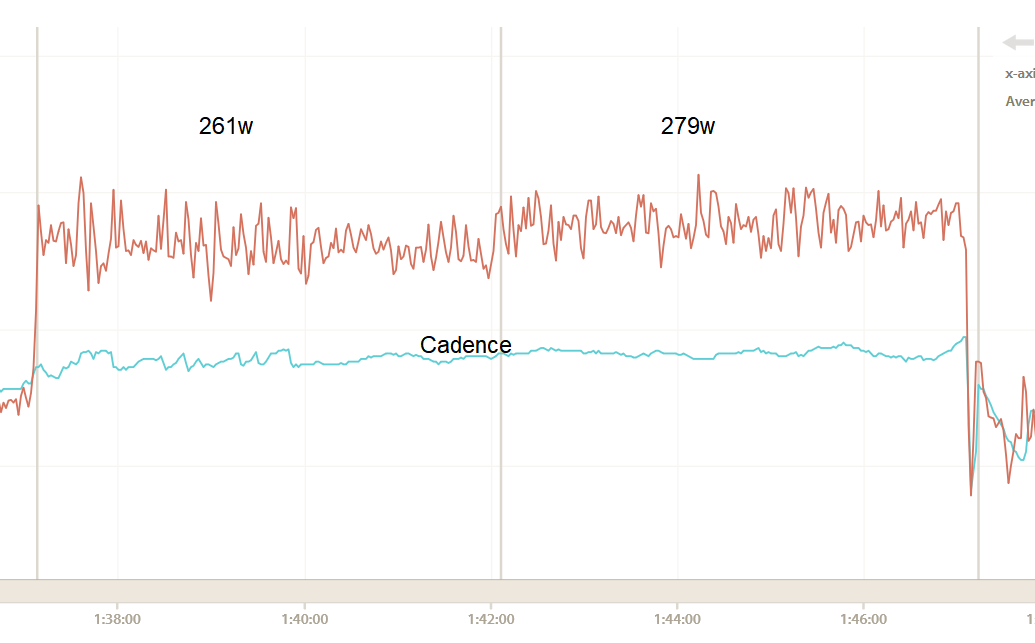 All in all, Zwift does a competent job of keeping your power and cadence stable in erg mode.  I did not design a 20w per minute ramp, but it can be done.
Comparison to the Elite training app:
Putting this into practical usage.
The 20 watt per minute ramp:
Obtaining your MLSS using a rectus femoris muscle O2 tracing should be possible with the 1 minute ramp stage process (using Elite's app).  Remember, we will need to figure out the approximate wattage at the breakpoint, then subtract about 10-15 watts due to the "response time" of VO2 change according to the article of Murias.
Here is what my data showed (from the above 1 minute per stage ramp).  Each point represents the O2 sat of the rectus femoris (per each second) over the course of the ramp.  I found the breakpoint (red line intersection), then noted the corresponding elapsed time.  Using that time marker, the average power over the past 20 sec was calculated at 290w.  Taking 15w off this figure results in a MLSS of 275w, which is very close to my historic data (and official testing): 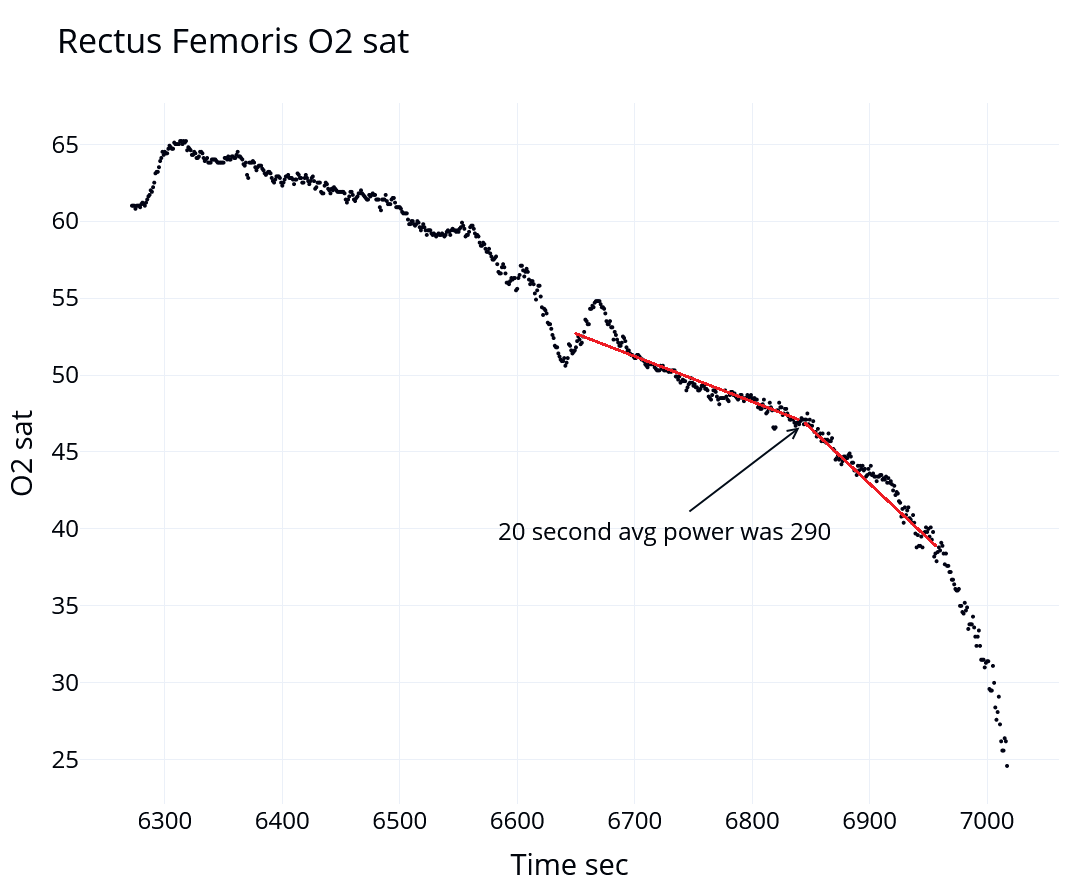 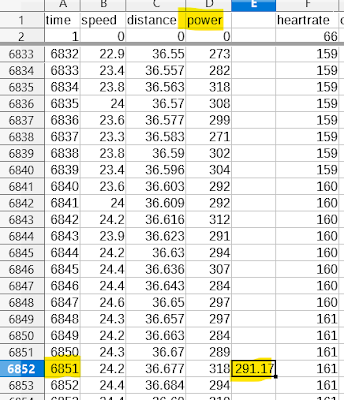 Five minute interval protocol for MLSS.
Using the Zwift ramps above:
Although not spoken of in the literature, this is a favorite of mine to determine MLSS.
We are looking for the transition from stability of RF muscle O2 over time to a constant decline over 5 minutes.
The rectus femoris site had a similar O2 saturation breakpoint between 261 and 279 watts: 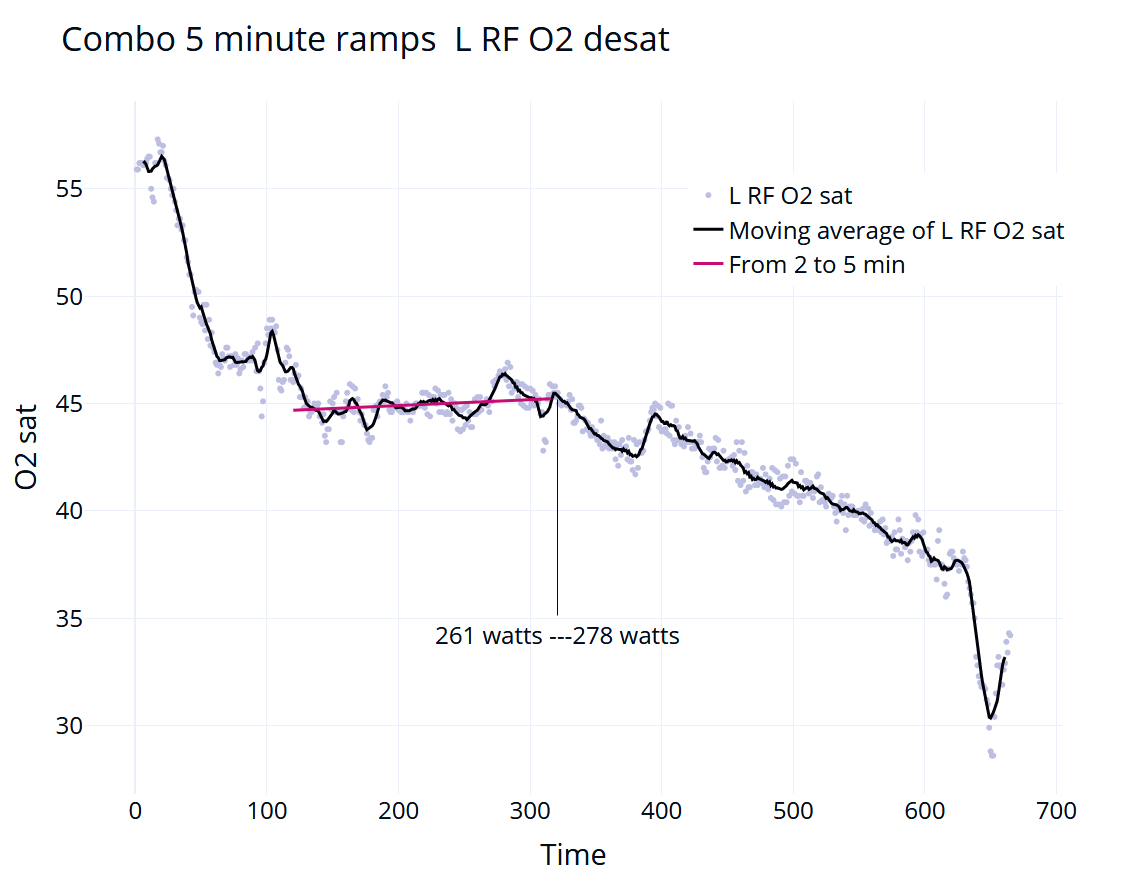