Instead of amending the first post with some supporting literature on low load hypoxic training, I wanted to review a particular paper that illustrates many of the points and principles of this subject.  This paper came out almost 10 years ago but it supports several observations and suppositions mentioned here including:

The study looked at the quadriceps group in young men in regards to oxygen saturation, blood volume when doing isometric knee extension.  The subjects maximum ability was further tested by superimposed electrical stimulation of the muscles to get peak contractions.  Sensor probes(NIRS) were placed on the various muscles of the leg quads and tracings were obtained at different levels of torque as a percent of the maximum they potentially could reach.
The subjects then did a knee extension contraction(isometric, steady state) with and without cuff occlusion.  The occlusion pressure was a massive 450 mmHg which is way higher than needed for total arterial occlusion.  The torque levels used in the exercise trials were between 20 to 45% maximal and the sensors were placed over 3 muscle groups.
A sample tracing looked like this:


Notice the different degrees of deoxygenation, slightly different curve shapes. The better O2 drop in the rectus femoris with a cuff indicates that a potentially higher torque is needed for that particular muscle group to desaturate without a cuff. But the cuff effect was not seen in the vastus medialis and almost not in the vastus lateralis.  This was only a 20% max contraction, perhaps just a higher "weight" is needed to target the rectus femoris.
And yes that was what was seen:

Graph C is the rectus femoris.  The maximum deoxygenation does become similar in cuff and non-cuffed groups, but at a higher torque value.  Similar to what I showed in a previous post, looking at the biceps vs lat dorsi desaturation doing a pulldown for example:

With the sensor at the same location(biceps), very easy to desat the biceps doing a simple curl at low weight. 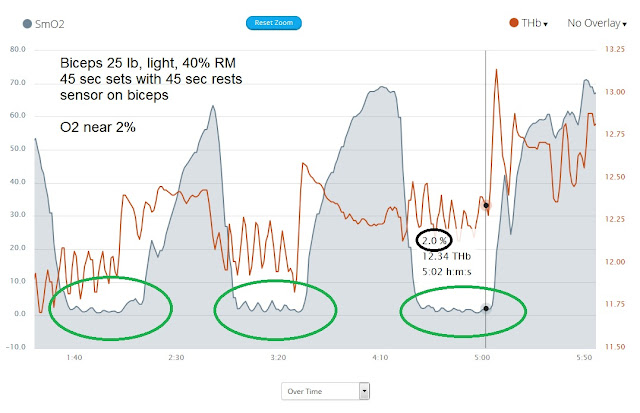 But, without moving the sensor, doing a pulldown at a comparative weight range causes much less effect on the same muscle--35% vs 3%. 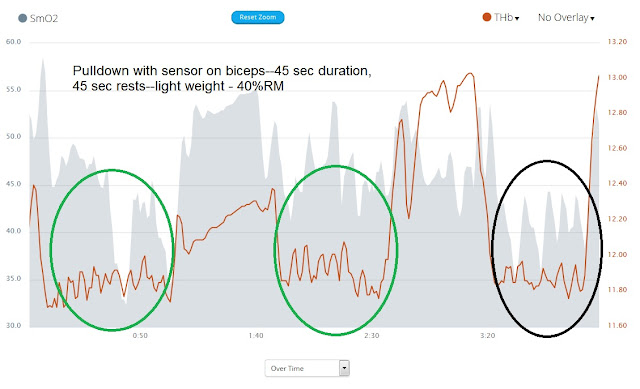 They also saw another similar phenomena, the gradual blunting of the desaturation in a low load contraction over time.  This is a tracing at 30% max, notice the arrows and the oxygen saturation:

Although the desaturation is not identical to the cuff technique it is certainly close.  It is also good to see similar patterns in the published literature to what we see ourselves. 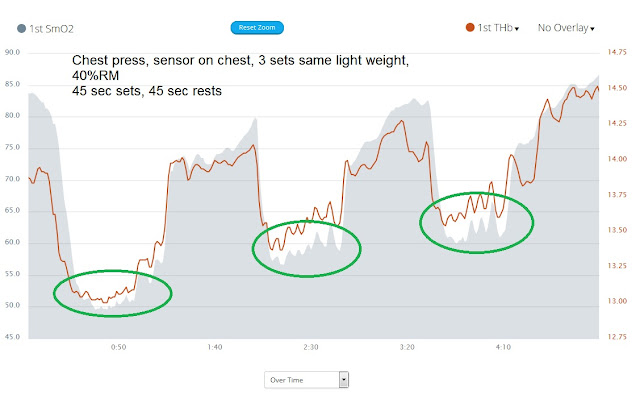 The above tracing is looking at 3 sets of chest press, at the same light weight.  Note the progressive rise in O2 sat and total Hb.  With this muscle we don't have the option of using cuffs to prevent this.  Also of note, the last set sensation of effort/pain was substantially higher despite the least effect on O2 saturation.

In the discussion of the data, the authors give several hypotheses about the variation of deoxygenation between subjects, muscle groups for a given weight as well as the saturation rise noted above.
These revolve around:

In conclusion, the use of a portable muscle oxygen sensor can help guide optimal targeting of muscle groups. This helps to compensate for the differences between individual subjects strength and ability as well as the particular muscular areas of focus.  Low loads can desaturate muscle groups well even without cuffs  Significant variation in oxygen and THb changes is to be expected between sensor locations and individual people.
at August 12, 2017 No comments: