The practical advantages of using costal O2 to modulate pace/power in real time has been a particular interest of mine. Unfortunately, the technical difficulties in getting this to work has been an issue, particularly for Moxy users. Therefore, it would be helpful to find an alternate placement location that would serve the same purpose, monitor respiratory accessory muscle O2 at high loads.
The most probable reason for the difficulty getting a stable measurement along the lateral costal area is the curved shape of the rib area and the undulating surface below. If there is an air gap between sensor/led, measurement will not be accurate. So a larger sensor like the Moxy may need a flat, smooth surface. Even better, a slight amount of tissue denting would probably help even more, maintaining even contact.

To address the above concerns and use parameters, I did a few preliminary tests with one sensor on the usual costal location and another sensor on my left pectoralis area, just lateral to the nipple and another test 1 cm below the first. This area is soft, flat and should handle a Moxy nicely.
Here is the location of test 1 (upper) and 2 (lower): 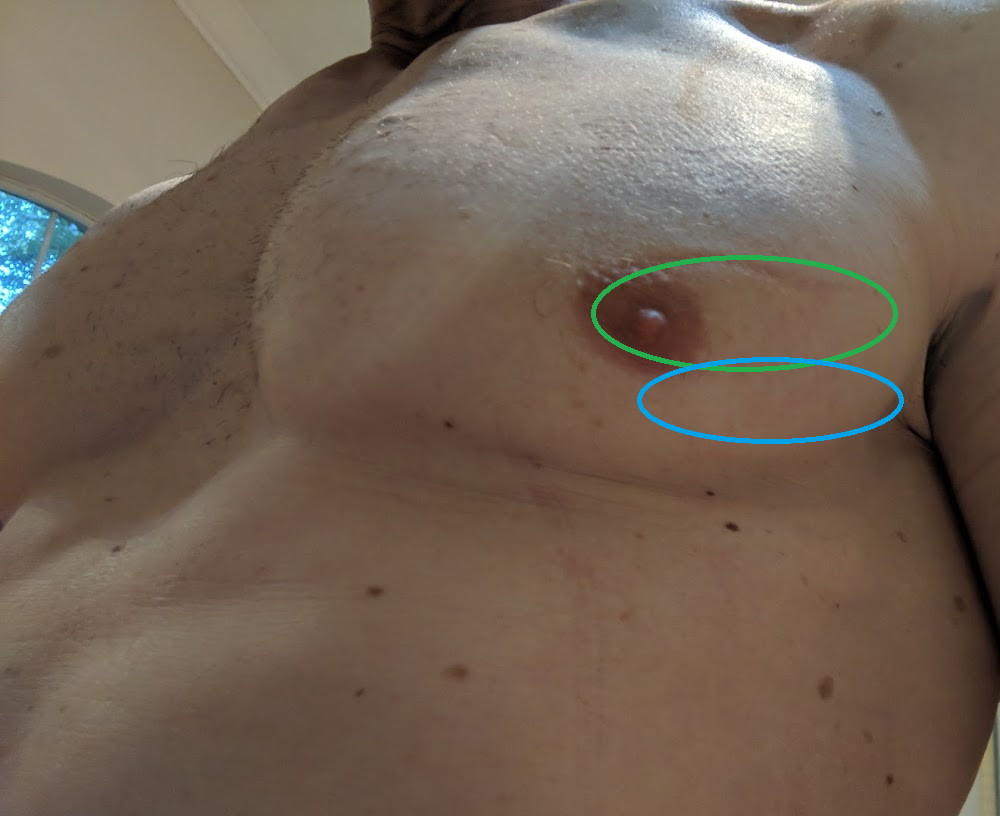 Let's take a look at the first location tracing (upper location in green).The following is a 1 minute max interval similar to previous examples.  We would expect near maximal costal O2 drop, but what about the pectoralis?  The costal O2 drops to a very significant degree (71 down to 3%). The pectoralis desaturation pattern is very similar (80 down to 6%) and also persists after the intense effort stops.  So proof of concept seems valid in that the pattern and magnitude of hypoxic change is similar to the costal.

Next is a simulated use in race pacing.  The first 90 seconds were done at about 400 watts which leads to a rapid O2 drop into the "race pace" area, then power is cut back to maintain this O2 level. The costal pattern is yet again similar to the pectoralis. The post interval hypoxia is also a bit longer with the pectoralis as noted in the first example. The pectoralis start O2 is 80% and drops to 15%, the costal starts about 70% and drops to 25%.

Note the lack of rebound of both after coasting.
They do not return to baseline for many minutes afterward.

The sensor was about 2 cm below the placement above.
The first interval is about 8 min at 280 watts and usually there is a slow downward desat curve.
Costal O2 and the pectoralis location again drop somewhat in parallel.

So it does appear that pectoralis may be changing as the costal area did.

The above was followed by a 1 min max (plus extra) to see how low both areas were capable of going.

The O2 sat initially is in the 70% range for costal, 80% for pectoralis.  Nadir drop is close to 7% costal, 30% pectoralis.  Perhaps in this location, the pectoral muscle minimal saturation is higher than in the slightly higher location.
However the spread from high to low is still 50% which if reproducible may be helpful in tracking cardiac output redistribution.
So in summary, there may be a practical alternative respiratory muscle location for larger sensors like the Moxy.
Although in a perfect world we would have multiple small sensors running in parallel to see what particular area worked best for each individual
user, this type of exploratory approach appears to be useful.
I personally will continue to look for alternate sites that are practical for road riding. Measurement of the strap muscles of the neck which are
heavily used in high respiratory rate exercise is an example of impractical use for our purpose.