We know all too well the hesitation to use indoor sports equipment such as treadmills and exercise bikes.  Let's face it, they just are not pleasant to use.  I'll take a ride in the rain any day rather than get on a good turbo trainer.  However, putting preference aside, do they provide the same degree of physiologic challenges to the cardiac, respiratory and local muscular systems?  While using my own bike on the turbo trainer, I noted the perceived effort was way higher than my physiologic metrics indicated.  However, the metrics were similar to the road riding data.  I decided to look into this further and report on some literature as well as my personal measurements that help reconcile this.

First off, is my perception of a higher relative effort valid?
A study was done comparing an outdoor 40 km time trial with an equivalent indoor simulated time trial (subjects personal bike on a computrainer).  The instructions were: 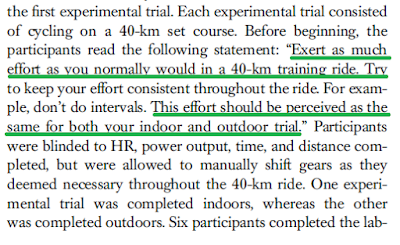 Therefore, same bike, same perceived effort but no feedback such as power, heart rate were allowed.
Results were quite interesting: 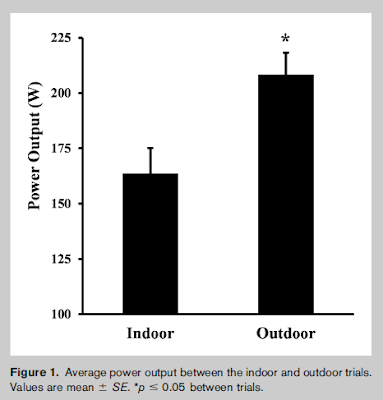 The outdoor trial was associated with a much higher average power (205 watts) than the indoor trainer (163 watts).  With the higher power came a higher average heart rate in the outdoor trial (152 vs 143).  The RPE and core body temp were statistically the same.  Therefore, despite the same bike/riding position, an indoor ride will have a drastic reduction in power at the same perceived effort.  Conversely, an outdoor ride, at the same perceived intensity, will yield greater physiologic stress and presumed benefits from the work out.  Other studies have not shown dramatic difference in physiologic metrics, but were done differently.  Either instructions were given to do a max effort, or heart rate/power was available for the subject to see.
For example: 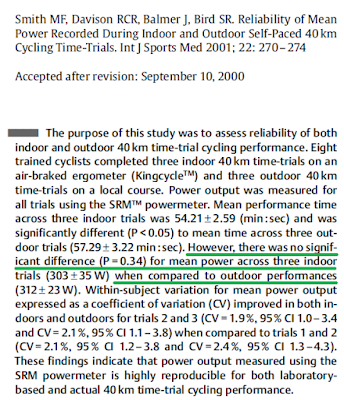 The above study was done at maximum time trial effort:

"After a short rest the subject was asked to
cover a distance of 40km in the shortest time possible achiev-
ing the highest average power output. Feedback in the form of
heart rate response (b ´ min±1), elapsed time (min: sec), and
percentage distance covered were the only visual cues given
during the trials"

Bottom line:
At equivalent power and heart rate, the relative perceived effort will be higher on an indoor trainer.  To reach the same physiologic targets, a much higher discomfort level must be endured.  No wonder most people don't like riding indoors!

It appears that the physical benefits can be equivalent on a trainer but only with sufficient effort.

However, what about issues such as muscle specificity and overall cycling efficiency while riding a turbo trainer?
This study looked at exactly that using EMG as well breath by breath analysis for calculations of efficiency.  The test condition was cycling on a treadmill vs using an electronically controlled turbo trainer.
From the paper:

"Pedalling technique was quantified by a novel parameter that
described the distribution of power during the pedal revolution.
The minimum power outputs during the pedal revolution (i. e.,
the dead centres) were expressed relative to the overall power
output and described as ‘dead centre size’ (DC) [ 21 ] . Leirdal and
Ettema [ 22 ] showed a positive correlation between efficiency
and DC and thus pedaling technique."

The EMG data did show some differences: The RF was the main muscle of difference and theoretically could be an issue especially for Powercrank users (such as I), since studies have shown that the RF is more heavily utilized with that pedaling modification. What the significance of these differences would be in practical terms is not clear.
Here is a further look at mean muscle EMG activity as power is increased.  There is again differences in the RF and BF (hamstrings): 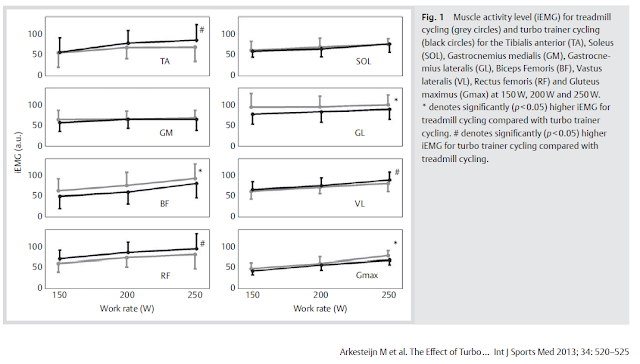 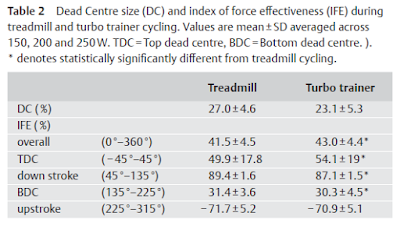 And finally their conclusion:

Their bottom line:
Turbo trainer EMG and pedaling technique are subtly different than road cycling but do not appear to impact efficiency.
One condition they did not test for was the effect of a road ride up a slight incline.  The trainer ride does feels more like a mild steady incline than a flat road (the flywheel helps of course but is not the same as a road feel).  Perhaps that condition would have yielded different EMG patterns closer to the trainer?  Arguing against this simple explanation are studies showing that pedaling mechanics and muscle EMG patterns are not altered with uphill riding.   This is a figure from the above paper showing that seated uphill and level cycling have very similar muscular patterns (as opposed to standing): 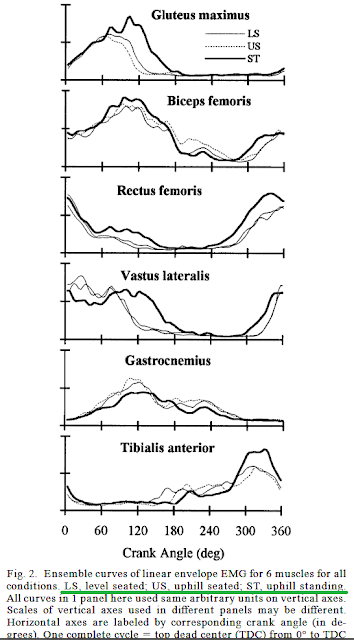 On close inspection, there are tiny subtle changes of unclear statistical and physiologic significance between incline and level seated riding.

On to my data.
My original purpose in getting a trainer was to recreate the interval efforts I have been doing and then determine finger-stick lactate values over this time.  Outside blood measurements in the heat/humidity of Florida are just not possible with the Lactate Scout (error 1 always seen).
As I was using the trainer, I was struck by how hard I was seemingly pedaling but the "numbers" were not showing costal O2 drop, heart rate elevation as they should.  This now makes sense in view of the first discussion above.
Lets now look at my physiologic metric comparison, specifically Hexoskin cardiac, respiratory data, costal and leg muscle RF SmO2 vs power.

The following interval tracings pairs were done in the same session, first a road ride of about 2 hours (1 hr warm up, interval, 1 hour back), then immediately putting the bike on the turbo trainer.  Another 10 minute or so warm up is done then the same interval was repeated. 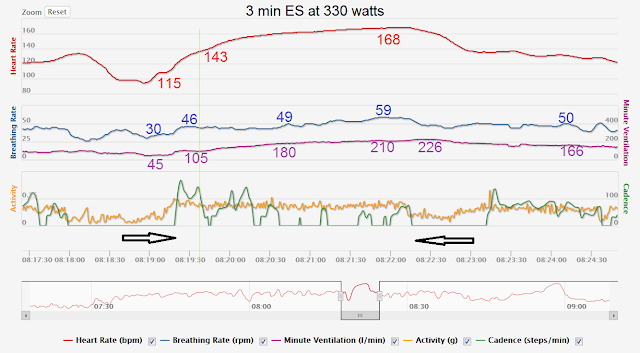 Even start on the trainer: 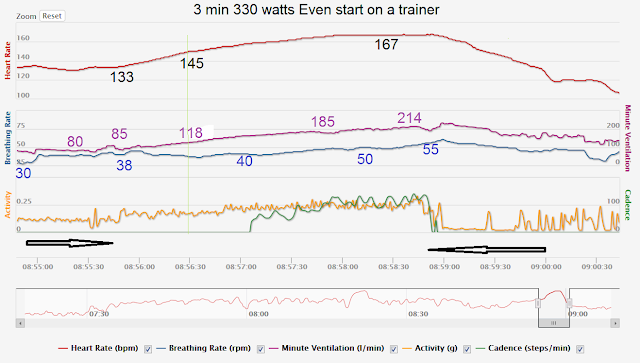 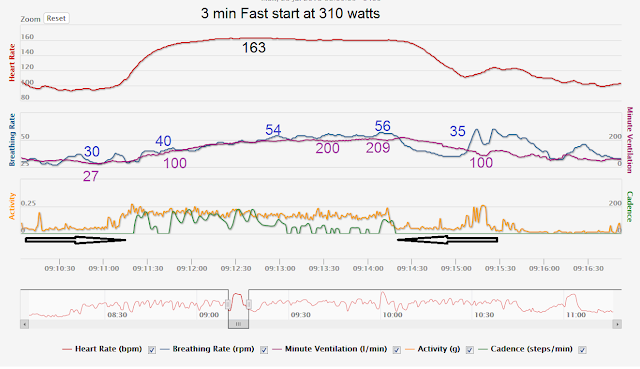 
Now for the trainer data
Bilateral costal O2 and power: 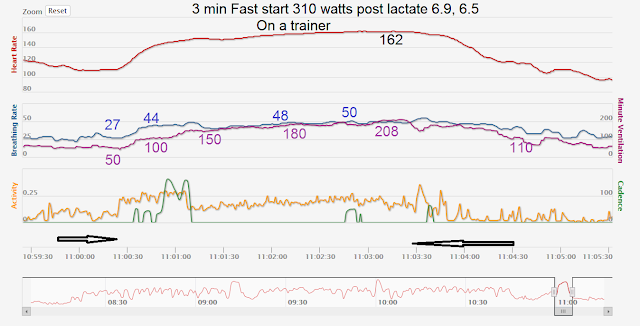 Comments:
One of my continuing interests is in the Fast start pacing strategy of Dr Stephen Bailey.  A difference in technique (amount and duration of fast start) may not be the only variable when comparing my observations to that published.  They use a trainer indoors (understandably considering what they are measuring):

Would the results be different on an outside road condition?  Probably not, but I need to keep testing conditions in mind as further trials are done.  One of the major differences that I am seeing with the Fast vs Even start pacing is that of heart rate trajectory.  At least on this limited look at indoor trainer vs outdoor comparisons that differential may become blunted.


This post is dedicated to my son Kipp who uses a trainer exclusively (performing multiple intense intervals) and has become a gifted cyclist as a result.