Ultimate limiter - cardiac output, can we approach the pros?

Over the years there has been debate about what constitutes the "ultimate" limiter of endurance exercise.  Concepts such as VO2 max, cardiac output, stroke volume, muscle size and fiber type, mitochondrial number and quality, O2 diffusion, capillary density, ventilation, lactate production and disposal are all involved.  However, after reading a recent study on cardiac structure and function in elite cyclists, I think a step away from the woods and an better appreciation of the forest is in order.
A good review by Joyner and Dominelli on the central limits of aerobic capacity should be read.  In it are some important fundamentals such as
For example, an athlete able to run at 90% of his VO2 max (VO2 max=70 ml per kg per min) may do better than another with a higher VO2 max (lets say 80 ml per kg per min) but having a lower percent of the VO2 max "cruising speed" or MLSS.

Taking this a step further, if athlete number 2 with the higher VO2 max gets his act together and improves his MLSS, he ultimately will have a superior result.

Despite some occasional commentary that a high VO2 max is not that essential to top end performance, some further thoughts on this come from another recent study.  In this paper, in depth structure and functional comparative analysis was done on 3 populations - elite, sub elite and normal young men.  The elite were members of UCI cycling racing teams, the sub elite were class 1, 2, 3 riders and the normal were inactive men the same age:

Two different echocardiographic techniques were done for both structure and function. 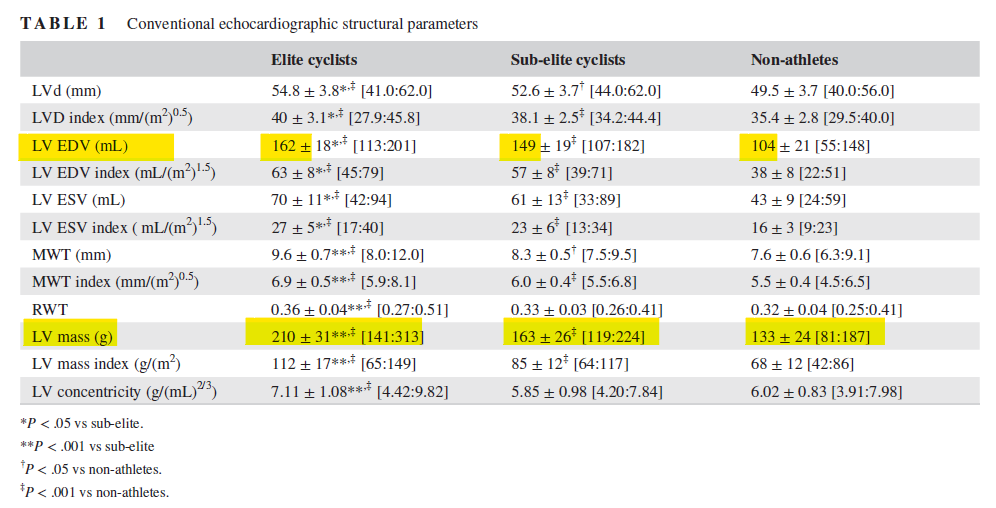 A significantly greater LV mass was observed in Elite C compared
to SubElite C, who presented with greater LV mass compared
to NA. Differences in LV mass between Elite C and SubEliteC are
primarily driven by increased wall thickness (and therefore
concentricity), whereas chamber dilatation differentiates
SubEliteC and NonAthletes.

It seems that we have several "levels" of cardiac structural change that occurs with cycling ability level.  The striking observation (to me) are the yellowed portion above.  LV mass is 50% greater in the elite than non-athlete group, an impressive finding.  In addition, the EDV (end diastolic volume) was also about 50% greater then the non-athletes.  The EDV is the volume of blood in the left ventricle (the main pump chamber to the peripheral circulation) right before a contraction.  Therefore we have the potential for a massive amount of blood to be pumped given the high volume and the large LV mass.  The LV ESV (end systolic volume) was a bit higher as well.  This is the volume in the chamber after contraction.  If this was a patient with heart failure, they may have a large mass and large EDV but the ESV would be relatively high from poor contractility.
The sub elite group have values in between but do not approach the extreme LV mass as the elite group.

The question arises, is this part of a genetic trait or one that can be trained.  I have explored some of the controversy around VO2 nature vs nurture in an old post, but some new comments and study data review is in order.
An impressive study was done a few years back looking at this issue.  Their premise was:


It is unclear whether, and to what extent, the striking cardiac morphological manifestations of endurance athletes are a result of exercise training or a genetically determined characteristic of talented athletes. We hypothesized that prolonged and intensive endurance training in previously sedentary healthy young individuals could induce cardiac remodeling similar to that observed cross-sectionally in elite endurance athletes.

The training methods started with very easy base training progressing to:


By the end of the year-long training program, subjects were exercising for 7 to 9 hours per week, including long runs of up to 3 hours plus regular interval sessions on the track and races. The purpose of this template was to maximize training efficiency and to provide a periodization of the training program 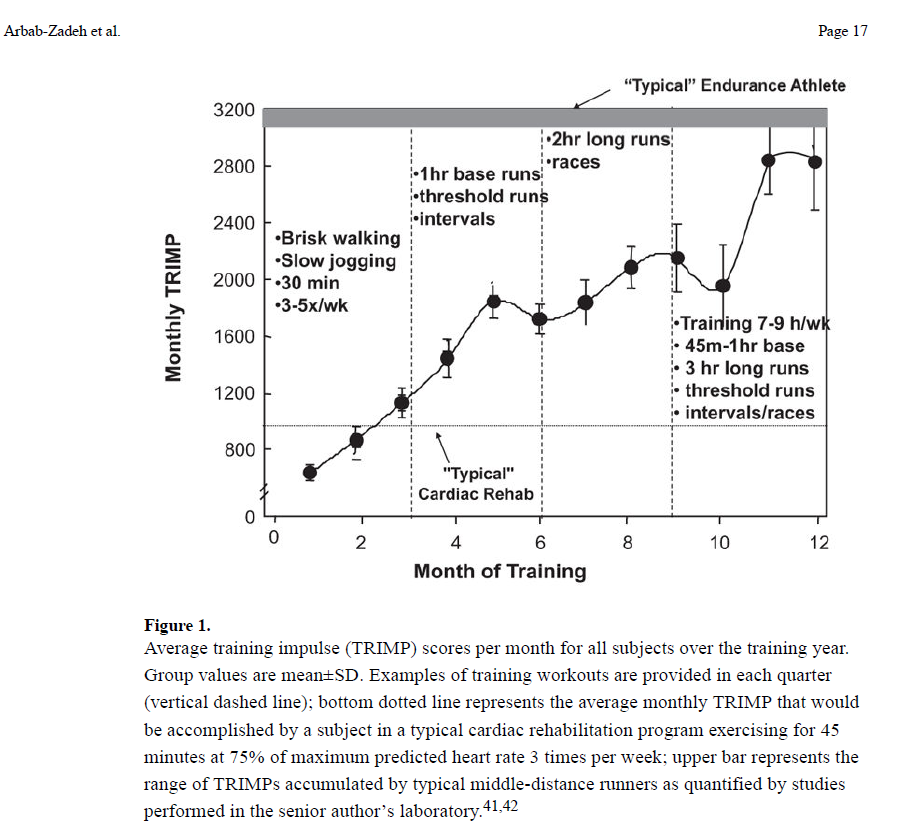 The key point here is that both large amounts of volume as well as some interval work was being done by the end. 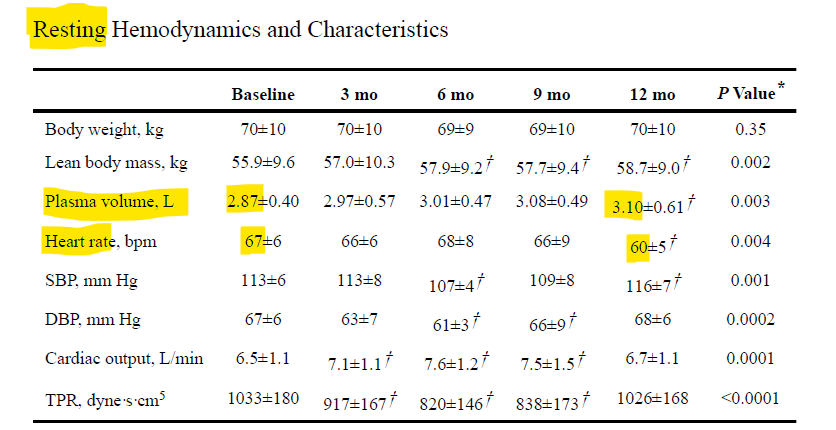 How about cardiac structure? 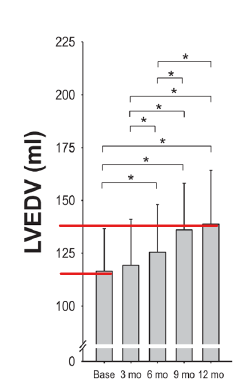 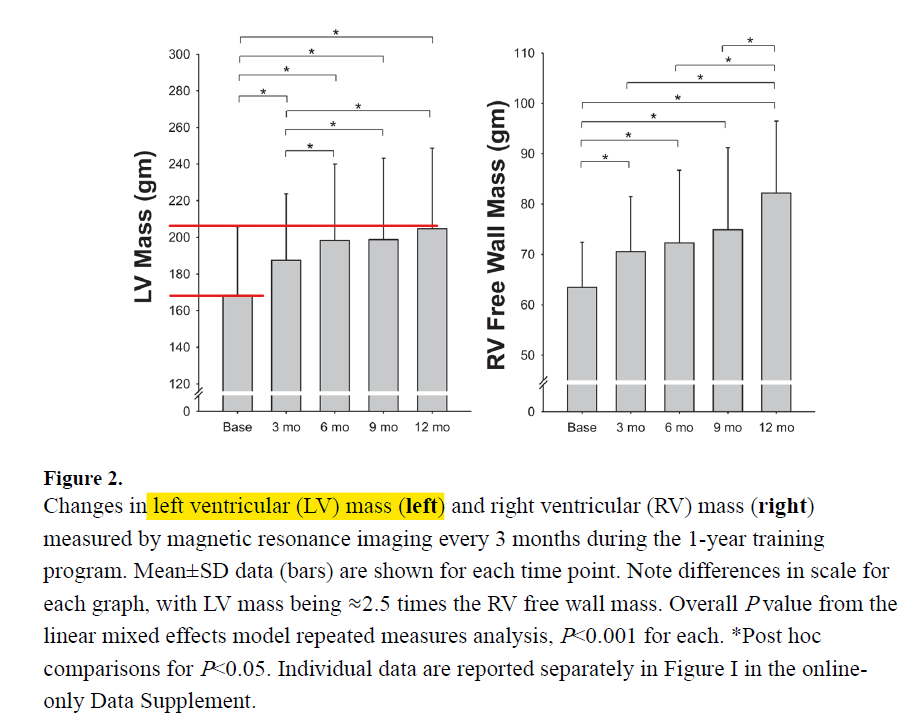 Both LV mass and EDV rose with training in similar fashion to the cardiac output/VO2max:

The largest increase in LV mass and mean wall thickness occurred in the first 6 months of endurance training. In contrast, LVEDV did not change significantly after 3 months, and it increased by only 8% after 6 months, reaching 39% of its maximum change within the testing period (Figure 3). The largest increase in LVEDV occurred during the last half of the training program, after the addition of interval sessions and long bouts lasting >60 minutes.

The last statement is of interest as it shows that some additional cardiac change occurred after 6 mos.

This is an extract from the discussion:


The primary new findings from this study are as follows: (1) Prolonged and intensive endurance training in previously sedentary individuals resulted in a large increase in LV mass, approaching a level similar to that reported cross-sectionally in elite endurance athletes.8,44,45 (2) Contrary to conventional thinking, the LV responded to the initiation of endurance training with an increase in mass without a change in volume (concentric hypertrophy); an increase in LVEDV occurred only after 6 to 9 months of progressive training, restoring the baseline mass-to-volume ratio (eccentric hypertrophy). (3) In contrast to the LV, the RV responded to endurance training with a balanced increase in mass and volume, thereby maintaining a constant mass-to-volume ratio (eccentric hypertrophy) at all levels of training. (4) Despite these morphological adaptations, and although maximal cardiac output and V̇o2 max increased substantially during the training period, they did not reach levels typically observed in trained endurance athletes.5,8 (5) One year of intensive endurance training led to a modest increase in LV distensibility and compliance but remained substantially below that observed in elite athletes

There are several possible interpretations of this data.  On one hand, the study appears to indicate that a wide array of subjects with no prior training have the ability to change cardiac function to that of high end athletes.  However, they don't reach the Elite levels seen in the first study discussed and their VO2 is substantially lower than usually seen in even sub elite groups.  Perhaps elite athletes just have genetic factors favoring faster and more profound changes in cardiac function/structure.  However, it possible that with continued training (years) many of these subjects would have continued to improve.  It is interesting that demonstrable changes occurred as soon as 3 mos but also some plateauing was seen with minimal change afterward.
Going back to the first study comparing elite vs sub elite, it would be interesting to compare the training histories of the two groups.  My bet is that the elite group trained for more hours a week and possibly did more intensity as well.  Another factor seldom thought of in these studies is the ability of the athlete to recover from repeated daily volume and intensity.  I suspect elite riders recovered faster, making overall training more flexible and allowing more easy as well as HIT sessions.
The bottom line is that it is certainly possible to change cardiac structure and function with training.  The question is what type of training is going to accomplish this?  Since the majority of the change seems to have occurred at time 3 to 6 mos, it seems HIT is not necessarily needed.  However, according to some previous work, VO2 max non responders need to increase intensity.  Another potential clue to the "volume vs intensity" question comes from another way of looking at training outcome.
Here is a recent study that posed the question of what factors determined the VO2 max response to a course of polarized training.

The subjects consisted of fit mountain cyclists who did not do HIT the previous year.


Twenty well-trained male mountain bike cyclists (age range 16-31
years) volunteered to participate in the study (Table 1). All had been
training for a minimum of 2 years and had on average participated in
14 sanctioned cross-country Olympic or cross-country marathon races.
Training workload was at least 7 hours per week for 10 months per
year at an intensity above50%maximal aerobic power (Pmax). Before
study outset, none of the subjects had any experience with periodic
interval training that involved repeated 30-second to 5-minute cycling
bouts performed at an intensity greater than 90% Pmax.

They were given a polarized model of training as the experimental regime with the bulk of training in the zone 1 range:


Endurance Training. Subjects cycled for 2–3 hours at 70–80%
power at the ventilatory threshold. Training was terminated if the
subjects could not maintain the specified intensity

Both various SIT and HIT sessions were used as well.


Sprint interval training involved 8–16 maximal cycling sprints.
The sprints were performed in sets, with each set consisting of four 30-
second all-out bouts interspersed with 90 seconds of rest. The sets
were separated by 25–40 minutes of moderate-intensity cycling
(70–75% maximal heart rate) as a form of active recovery.

Subjects alternated between 4-
minute high-intensity cycling (at 85–95% Pmax) and 12-minute
moderate-intensity cycling (60–70% maximal heart rate). This
cycle was repeated until the subjects was unable to maintain the
required intensity. The subjects completed on average four to 6
cycles per training session

What factors predicted the improvement? 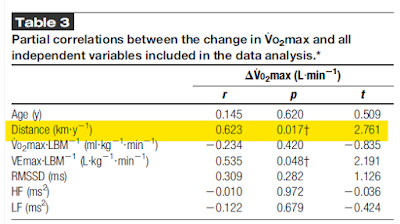 
Our results show that training status, quantified as the distance
cycled in the previous year, was the strongest predicator of
V̇O2max. This is also in agreement
with previous research, in which the effects (measured by V̇O2max
and Pmax) of a similar training intervention involving SIT, HIIT,
and ET were maximized if this intervention was preceded by
a greater volume of training

Do the pros actually do the distance?
Years ago I was watching the TDF and saw an interview with Lance.  He was describing his training - consisting of at least 7 hours a day most days of the week!  Despite whatever natural aptitude he possessed, the training volume was incredible.
Here is a link to what some of the pros were doing recently on Zwift and it is quite impressive! 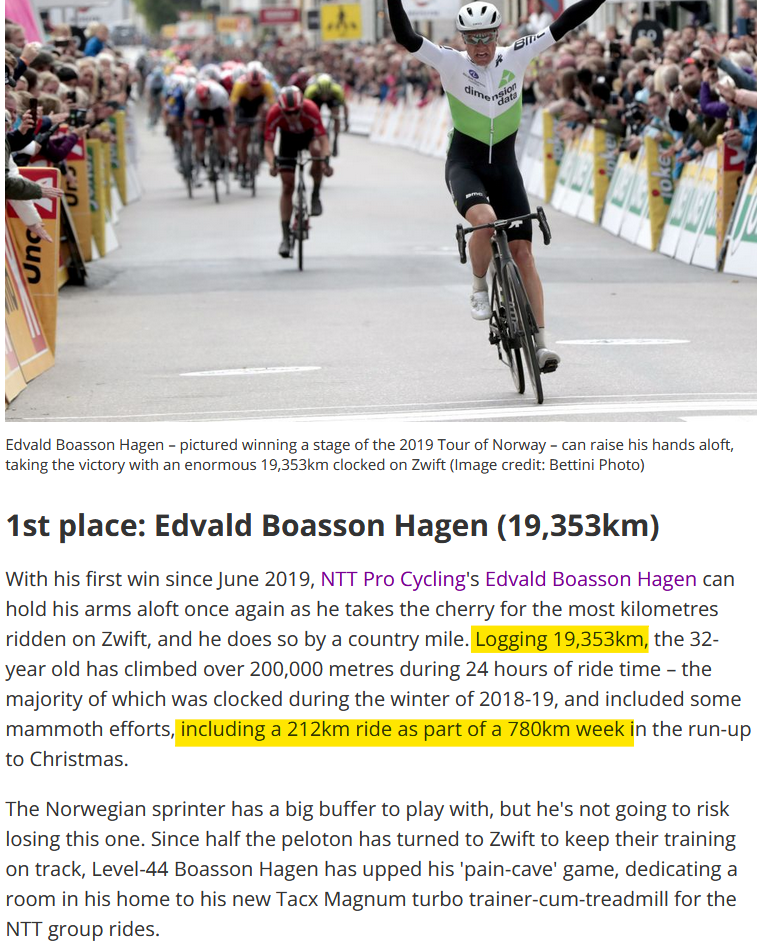 If you are dissatisfied with your performance, consider what the pros are doing - basically a full time job on the bike, probably 5 to 7 hours a day.  The majority of what they must be doing has to be zone 1/easy training with various HIT/SIT regimes.
This is not to say that one should be doing this type of program (who has the time).  Working a job, taking care of a house/family with a training schedule like this is a recipe for stress, exhaustion and illness.  I only bring it up as a reason why most of us will never approach the elite ranks, no matter what type of coach is employed or training method followed - we just don't have the time.