The last post discussed the potential to accurately monitor respiratory rate via either ECG or HRV.  Yes, this is a nice observation, but what practical benefit can this be used for?  After all, it may be of some interest to know a given respiratory frequency number with some accuracy, but if there are not any practical uses, why bother?

In our introduction we do go over some use case scenarios including threshold determination and training load quantification.  Discussion of thresholds may be done in the future, but in this post I would like to review the very intriguing linkage of blood lactate, respiratory rate and the usage of resp rate to better assess training load.  For a general discussion of respiratory rate and exercise see this excellent review by Nicolo and colleagues.

Use of respiratory rate to help quantify training load.

As I'm sure you are aware, the science behind how to measure/assess/quantify the degree of "load" induced by a given session of exercise is still a work in progress.  Although it's perhaps a topic for another day, one way at approaching the problem is to see just how much of a "performance decline" occurs after a given session.  For instance would one see much of a performance decline from a long session of low effort, or a short session of very high intensity?  In addition, when we measure the initial session, what do we quantify? joules, avg power, HR, VO2 etc?

Taken from the excellent review by Passfield et al, we see the effects of various exercise times and intensities on APD (acute performance decrease) plotted against the various common metrics used for assessment of load. On a simplistic basis, slide "A" is total work done (TWD) and we see that the more work that is performed, the higher the APD - but it depended on session time and intensity (not just total work) - and this was present for TRIMP and HR.  By the way, the APD was defined as the time to failure of during a cycling interval at 80% of peak power - not something that's going to fit into a training schedule on a regular basis. 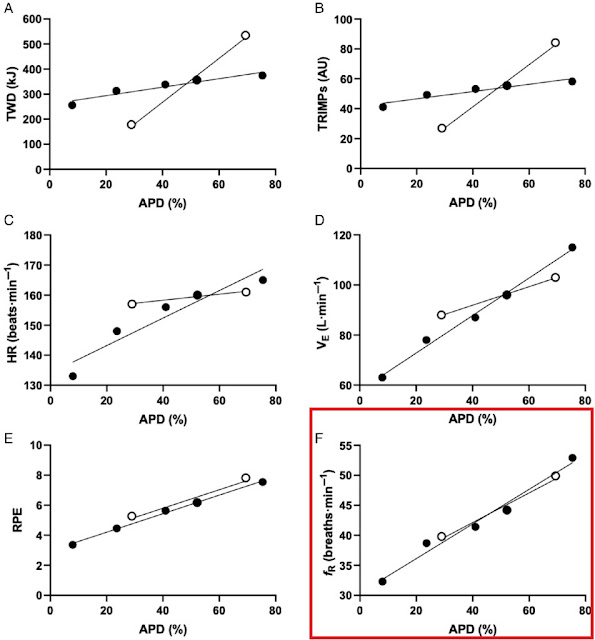 From the caption - Data replotted from Fullerton et al showing correlation for session TWD (A), TRIMPs (B), session HR (C), VE (D), RPE (E), and fR (F) versus APD measured as time to task failure. Filled circles are for 30-minute sessions at different intensities; open circles are for sessions of 15, 30, and 45 minutes at maximum lactate steady state.

It is important to see that only resp rate and RPE had overlapping plots for both 30 minute constant power intervals and MLSS 15 to 45 minute intervals.  I circled the resp rate relationship in red - as expected very high resp rates were associated with large amounts of APD.

These findings are consistent with the suggestion that effort is a key determinant of APD and supports the potential for respiratory monitoring as an objective marker of this.

The fact that both resp rate and minute ventilation (Ve - resp rate x tidal volume) rise with effort/intensity is certainly a well known fact.  As part of this basic science concept is that the  tidal volume rises before the breathing rate takes off:

From Plowman and Smith textbook: 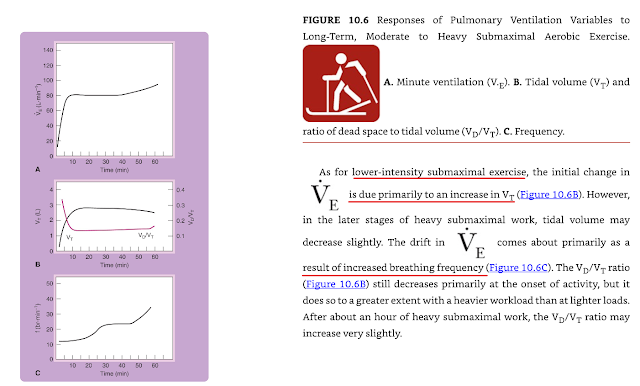 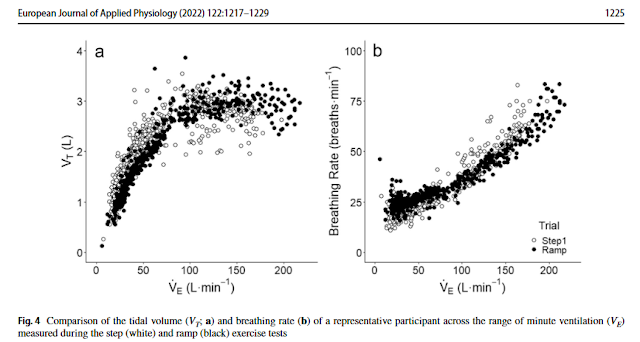 From the general review by Nicolo:

"fR plays an important role during exercise as a strong marker of physical effort, more so than other traditionally monitored physiological variables. The non-linear increase of fR during incremental exercise parallels the well-known time course of blood lactate (La), resembling the change in physical effort and task difficulty experienced at exercise intensities above the first ventilatory threshold."

I did explore the references given to support this, but to my eye they were a bit obscure. After some more searching, I did come up with a very interesting piece of supporting evidence for lactate linkage (which was not available when the Nicolo review was written) derived with a mathematical modeling approach. 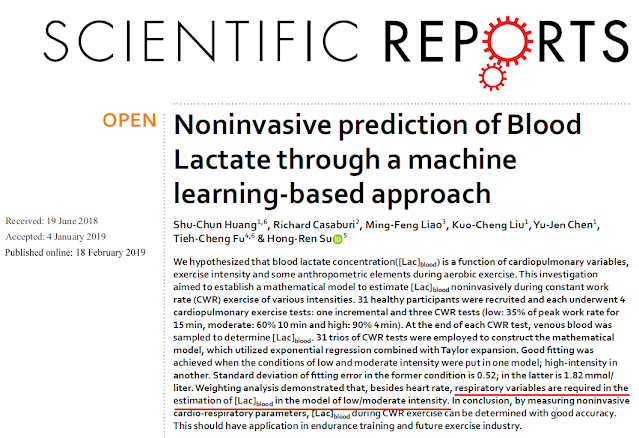 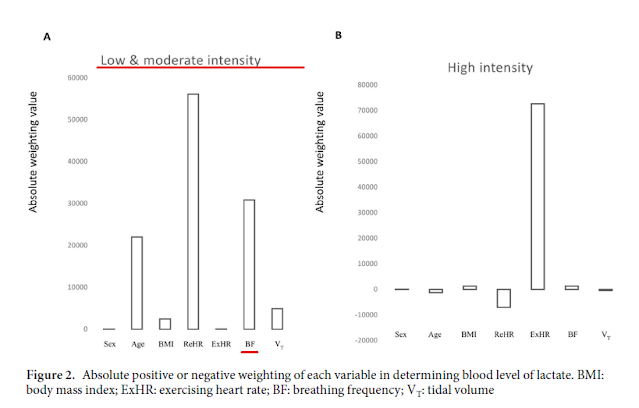 Now that we have a general idea about relative lactate levels during a given endurance session, how can we use to information for training purposes?

Let's revisit the literature as to how best proportion training intensity.  We have polarized, threshold or pyramidal models that dictate how much time we should spend in each intensity zone in training.  Hence, making sure one is performing a polarized session properly, precise "intensity" measurement of the time spent per zone is needed.  For example, if I do 3 minutes of all out HIT with the remainder of the 97 minutes of a 100 minute session well into zone 1, is this really a 97:1 polarized ratio?  For some high end athletes, the cessation of a HIT interval may well signal the end of the training challenge, but in others it may not be so simple.  A very interesting article came out recently modeling lactate decay after a 3 min max interval:

Essentially, we see that lactate can hang around for quite some time after an interval depending on how high it rose and the post HIT exercise intensity.  Since it appears that resp rate is related to lactate (especially in the moderate intensity range), it would be interesting to follow that metric after the HIT, even when you think your are back in zone 1 recovering.  The concern here is that if I did do that 3 minutes of HIT, the zone 1 power afterward really should not be counted as zone 1, considering the lactate decay curve.  Since lactate and resp rate appear to be correlated, perhaps monitoring resp rate can help us to follow lactate decay and "internal" metabolic load.

About 2 years ago I shared a session of very polarized training with measurements of power, HR, lactate and DFA a1.  Although I presented the decline of a1 after the HIT as a marker of fatigue and/or lactate elevation, reprocessing of the raw ECG data shows some very interesting resp rate data. 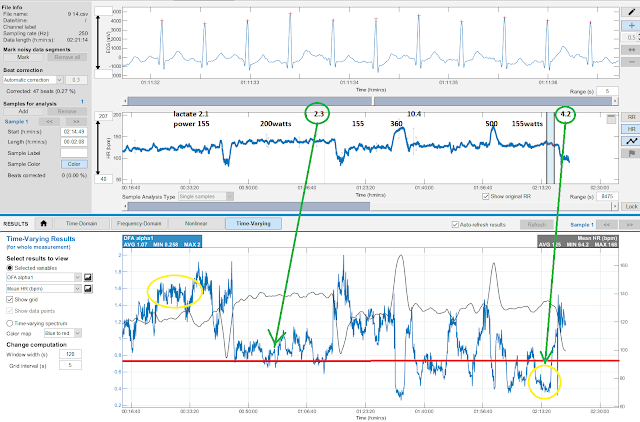 How did this look regarding resp rate? 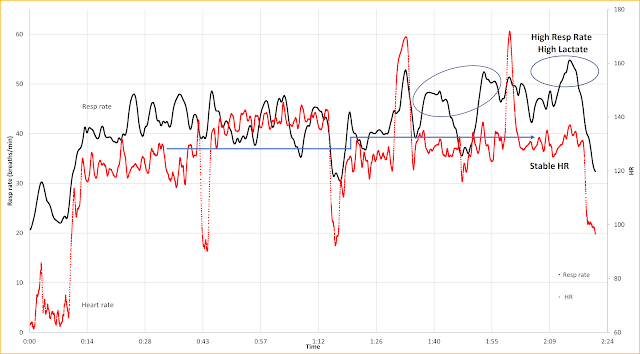 My point here is that even though external load markers (power) were well into the zone 1 range, internal metabolic load markers (lactate, resp rate and even DFA a1) were running above this zone and should be "counted" as such in a training distribution model.

Here is another pre/post 3 minute HIT, HR and resp rate comparison.  There was a mini warmup ramp to confirm decent recovery/readiness, a 3 min max interval, followed by easy zone 1 (165w), resting, slow walk then resuming cycling at easy zone 1.  The aim was to show that resp rate stayed high post HIT then recovered post rest, but HR would be less helpful for zone distribution in each case.

The HR and resp rate: 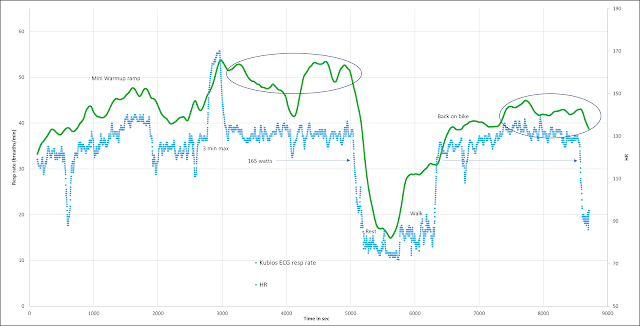 According to both La and resp rate, I spent much more of my time in zone 2 than anticipated.  In fact, many times I will do a 3 minute max interval on the road and follow it with another 10 minutes of zone 2, which in retrospect is probably zone 3 - if I would have measured lactate which I can't do in the field (I've tried).  Of course, YMMV - my La clearance is probably sub par compared to the talented athletes out there.  But, since we are all of different abilities, it makes sense to not fool oneself by training with excessive loads.  Conversely, those out there with prompt La normalization (and resp rate) can compensate accordingly.  Which brings up the second point.

My Garmin watch is always notifying me about a "high aerobic shortage".  I'm assuming this means that I don't spend enough time in zone 2. After looking at this data, they probably are not estimating the zones properly.  On the other hand, if Garmin had an accurate resp rate computation and considered the implications of persistent elevation post HIT, they do have the potential to better assess this situation.

First and second Lactate thresholds, why the confusion, how to measure?
at September 30, 2022