One of the most commonly manipulated parameters in strength training is the between set rest interval.  There is certainly no shortage of opinions and research papers on the subject.  In thinking about this post and reviewing some of the literature, it is near impossible to come to an obvious unified conclusion on what works best.  Of course, the term "works best" implies we have a goal in mind.  If your goal is to be a power lifter and have great peak strength, lifting heavy weights should be the predominant training stimulus.  To do that well, longer rest intervals are mandatory, since if you are not amply recovered, you physically can't preform the exercise.  On the other hand, training for moderate strength, endurance, muscle mass, metabolic/hormonal improvement can be done with a host of different modalities.  I am going to simplify hundreds of studies to make life easier--the published data shows that pretty much no matter the length of the rest period (within reason), there really is no major difference in outcomes in strength and muscle mass.  So if you did 3-4 sets to failure of 10 RM (about 10 reps by definition), your outcome over time would be similar with 30 sec, 1 min, 3 min or 5 min rests.  That is not to say that slight differences do not exist in certain study protocols, but they are not huge.

In regards to low load training, as previously discussed, our goal is to get maximum tissue hypoxia over the longest time with the most minimal load.  One could argue that we should not reduce the load too far since we are relying on the muscle contraction as our tourniquet cuff.  I have looked at rest intervals in this type of training and have not seen much advantage in tissue hypoxia with 30 sec vs 60 sec rests between sets.  Anecdotally, I will say that fatigue will be much higher with 30 sec rests, resulting in shorter time under tension of the actual exercise when it is done.  Also, as mentioned, there is a time ramp downward of tissue oxygen that takes about 15 sec after exercise commences, so a 30 sec set is a bit shorter than we would like.  On the other hand, a very short rest may not allow full re oxygenation, and the following set may be able to piggy back on the hypoxia from the first set and produce an even longer time of oxygen deprivation. Most "short rest" studies use a 30 sec rest interval, but perhaps something even shorter would be more helpful with our goal. In a previous post I showed a tracing of 4 sets of exercise with 30 sec rests, saturation came back to baseline by the start of each set(so a piggy back effect was not seen in oxygen drop). 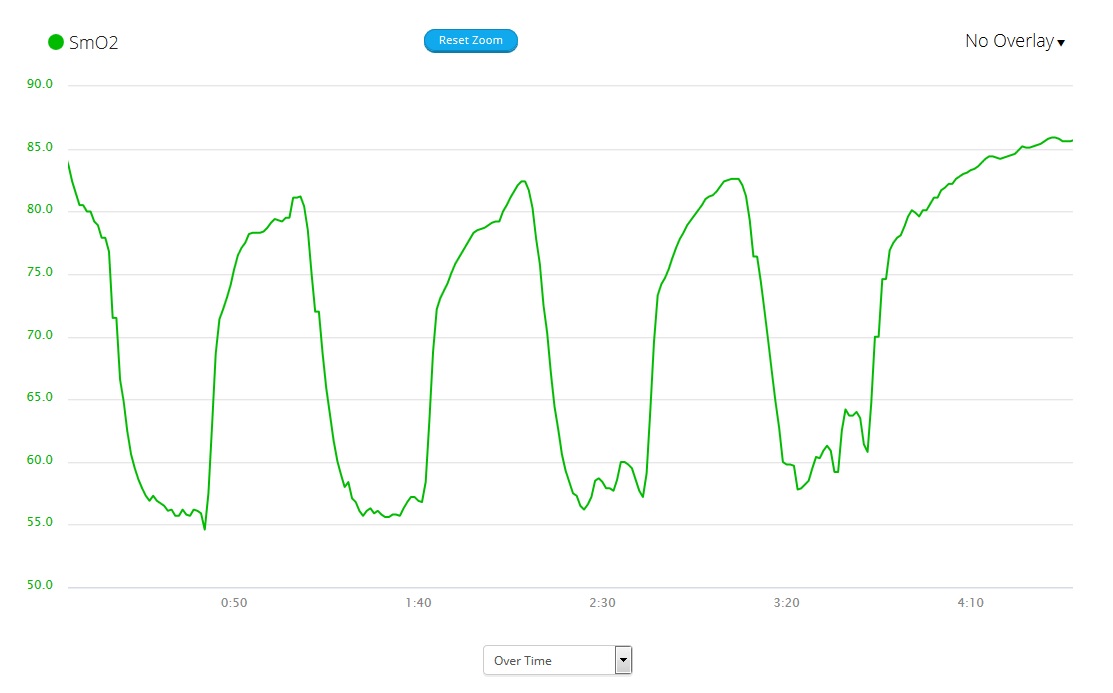 Therefore, an attempt was made to see if 15 sec rests provide the balance between fatigue(worse if rest shorter), oxygen rebound (worse if rest longer).

Before embarking on a 3 set routine of 15 secs rest intervals, let's be appreciative of the hypothetical fatigue factor.  If you have done any lifting, you will be familiar with the feeling of how easy the first set is, and how impossible the last turns out to be - despite the weight being the same.  Knowing this, I set the weight load at extra light (light-15%), or the amount I use in the initial part of the reverse drop set approach (extra light, then light, then slightly above light).  In addition, I do not think a lift to failure would be wise on the first set.  According to the data published and seen in this blog, the desaturation will be ample either way.  However, since we are going to do another set 15 sec later, some "reserve" in ability is required.  As noted in discussing fatigue, the feeling of muscle strength loss is multi-factorial and not related to hypoxia.  So, as shown before, a lighter than usual load the first set will desat as well as a slightly heavier one.  That takes care of the first set.  The next set will usually not deoxygenate as well with a 30-60 sec rest, and a slightly higher load would have been needed to get a similar effect.  But, we are only waiting 15 sec so lets keep the weight the same--still extra light and see what happens.  This is more of a practical restriction, again anticipating the tremendous fatigue that can ensue.

The following tracings are based on this protocol-- 3 sets of extra low load (usual low load-15%) time of each set is 45 sec (even if more could be done on the first and second set with a 15 sec rest.  Remember to account for the fatigue that will ensue later on). 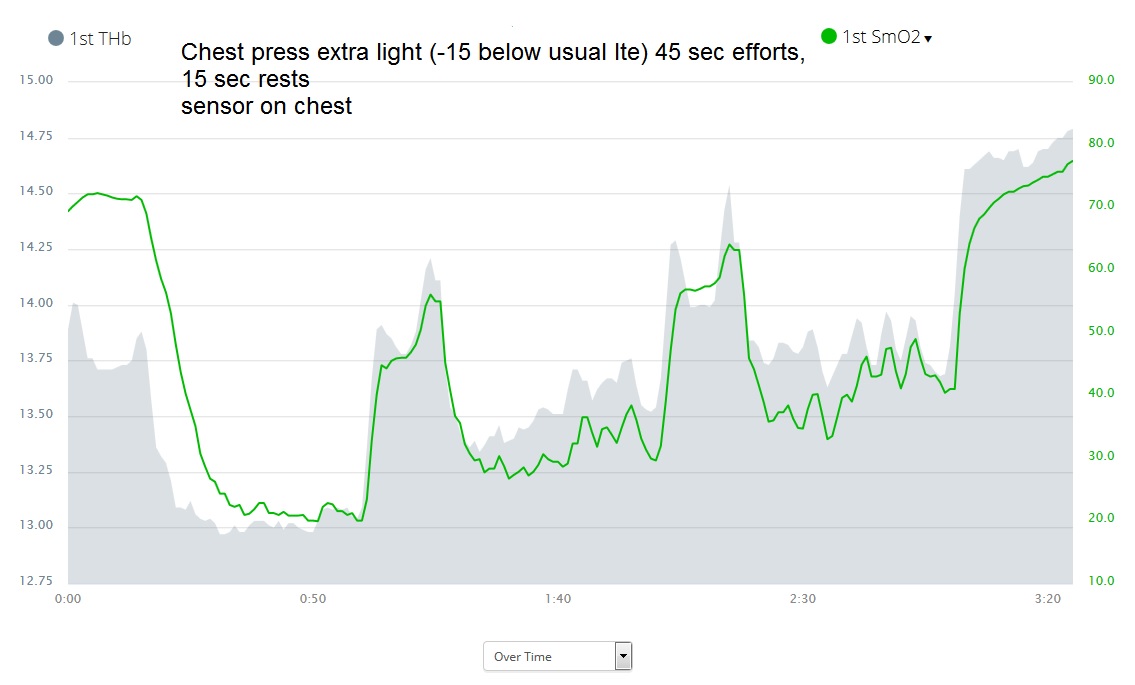 There is some drift upward in oxygen saturation with sets 2 and 3.  Not what I was looking for, but on other examples below, not as prominent.  Remember also, this represents an extra low load on all sets making comparison difficult (and sparing the joints, connective tissue from load stress). 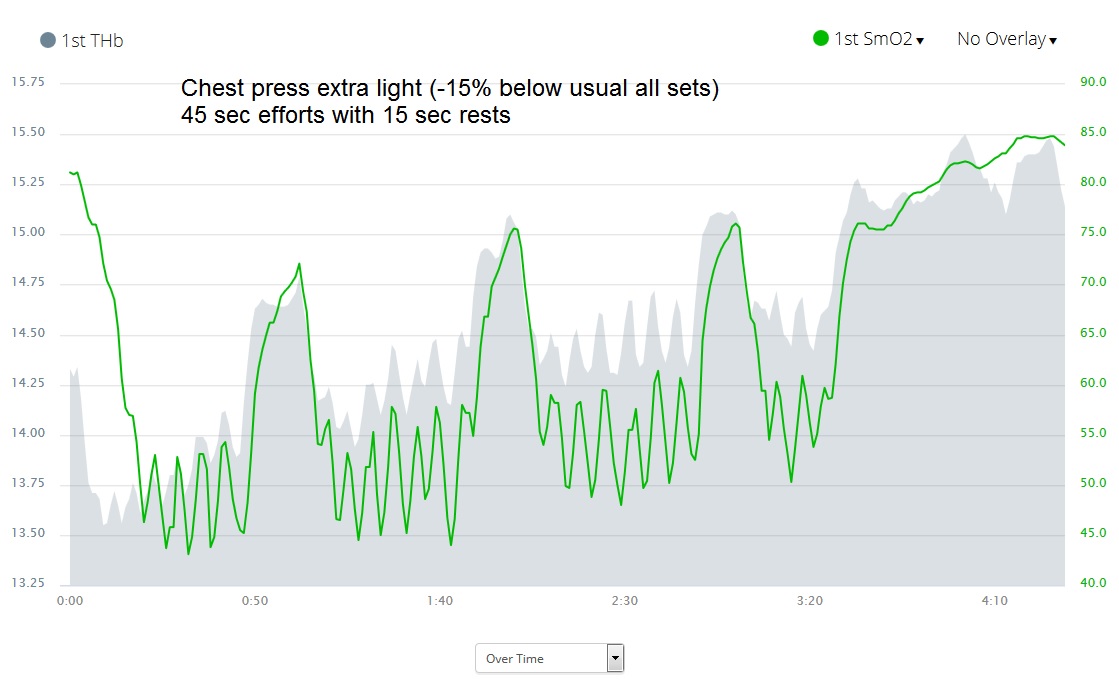 Note the reasonable desaturation (green line) and the drop in total hemoglobin (gray).  On the sitting chest press I did an extra set of 15 sec or so, curious to see if the desaturation would continue(it did).
BTW, look at the grey line, total hemoglobin drops with a huge rebound at the end, indicating blood engorgement into the area.
Here is a tracing of a pull-up (body weight minus 50 = 130 lbs) .  The third set was a struggle with less than perfect technique leading to some re saturation and hemoglobin rise (gray line).  But the whole set/rest session was well below the baseline oxygen saturation levels.
45 sec lift      15s rest     45s lift     15s rest   45s lift     Done!! 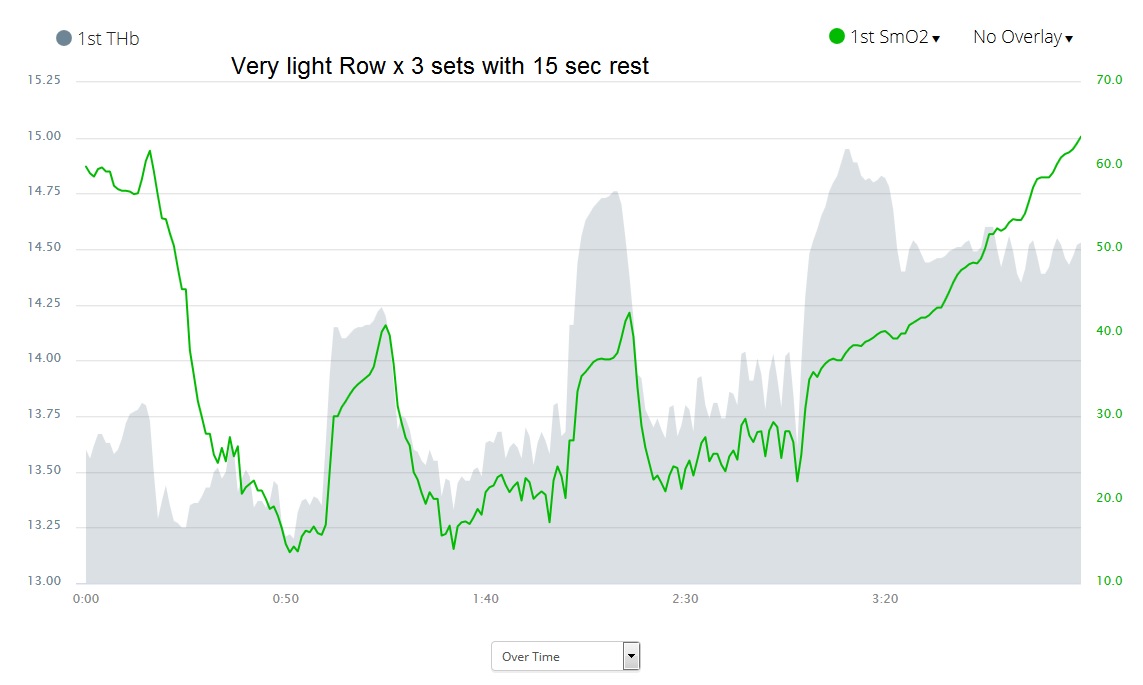 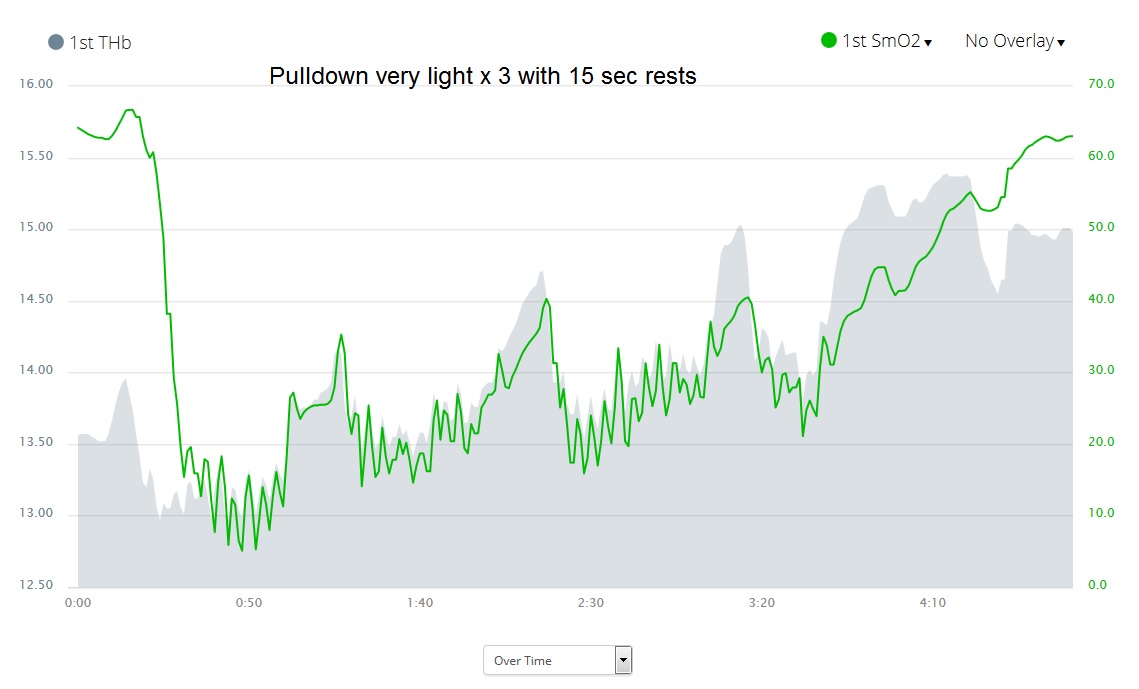 It is interesting to see the gradual blunting of the desaturation after continuing sets despite the severe muscular fatigue and inability to go on (but still hypoxic).
Some concluding comments:
at August 06, 2017