Another clue to spot the change in cardiac output redistribution/exercise decompensation would possibly be a desaturation in truly uninvolved muscle.  As discussed before, the costal muscles are quite involved in the work of breathing at high rates and exertion.  They compete for resources with the legs, hence the drops we have been seeing.  However, it can be tricky to measure with a large sensor and I have been thinking of alternate sites.  According to posts on the Moxy forum, many users put a second sensor on the deltoid as their non involved site.  The following is a review of what I, and they have found in regards to deltoid desat under load.
As a beginning prediction based on previous ideas and tracings, my guess was that some of us with relatively lower stoke volume will desat more than others as a way of shunting blood supply to the legs.  Obviously, if we are already compromising the respiratory muscles, the deltoid is a prime target to "steal" from. Conversely, some athletes with excellent cardiac output will not see much if any of a deltoid drop since they have blood flow aplenty.
The first example is here:
A strong rider with a significant drop in the deltoid saturation at high power outputs. 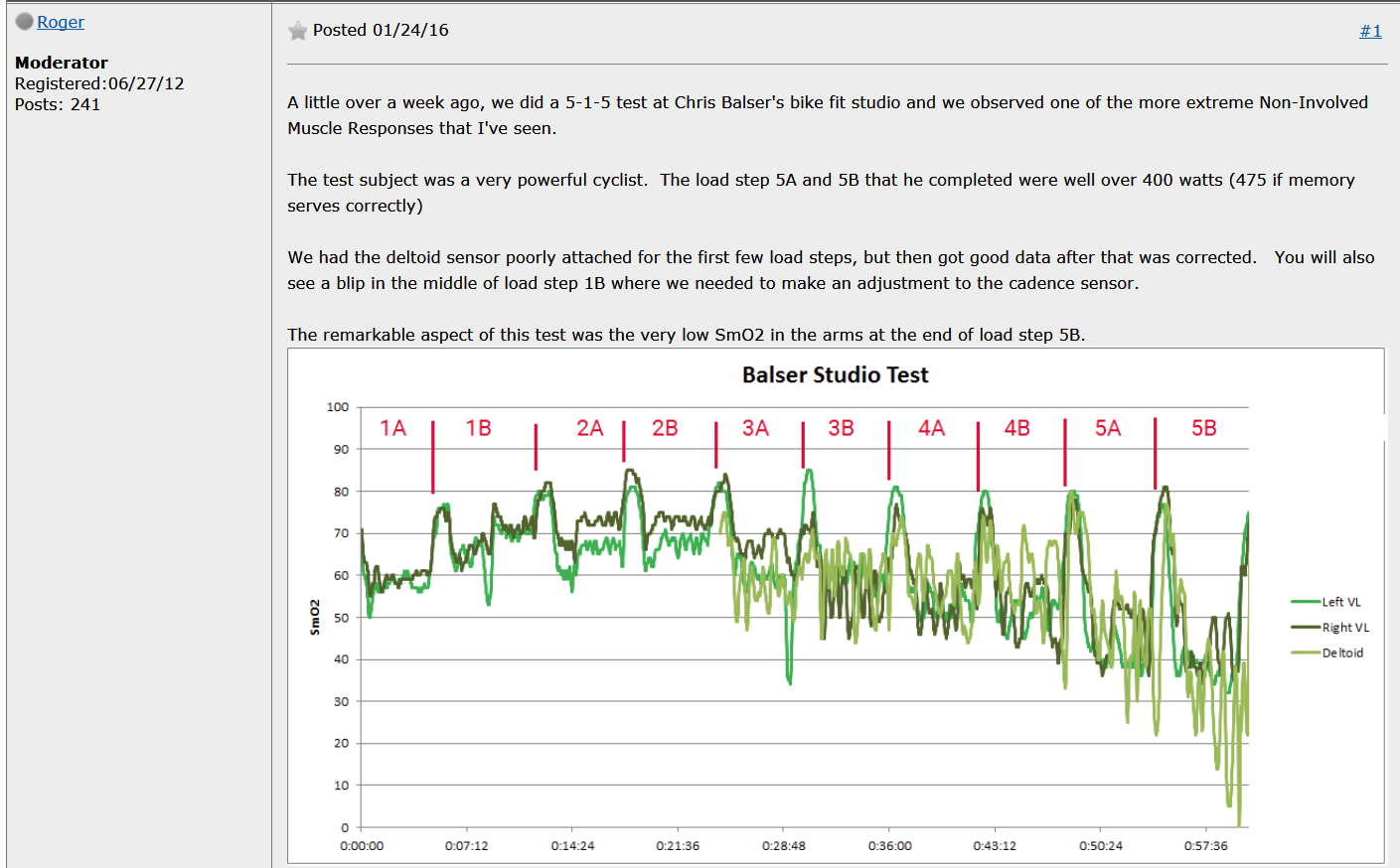 The next example comes here 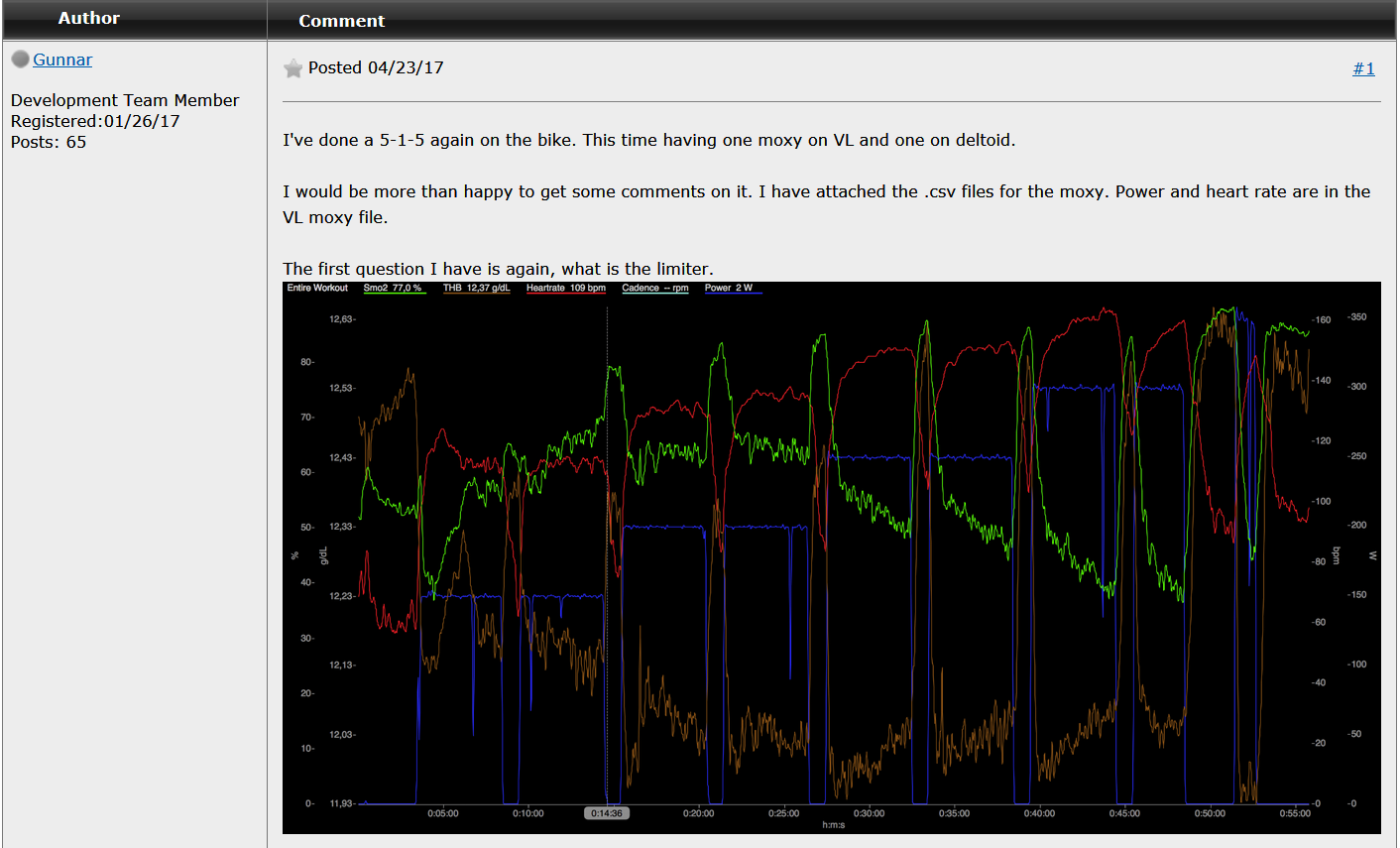 Now, we don't have a tracing of his deltoid but he did link the csv data:

Notice the excellent mirroring of the deltoid desat to the VL, especially at the end where watts are highest.


The following is also very interesting:


So he noted severe shortness of breath and deltoid desaturation at very high load.


We can see that the deltoid drop (line 3) was occurring at high load.
But perhaps even more interesting is the further drop after he stops pedaling. The top chart is showing rapid re saturation of leg muscles but since he probably had major respiratory muscle desaturation (as well as the issue of exceeding respiratory threshold and therefore forced to maintain high respiratory effort after he stopped pedaling), the deltoid flow is shunted even further.


Now back to my own data.
First is a tracing of an 8 minute interval at about 290 watts:

The green, 1st SmO2 is the costal, 2nd SmO2 is on the deltoid, watts are in purple.
The deltoid and costal are remarkably in parallel!

Next a 1 min max up a hill, same color coding:


Both costal and deltoid bottomed out in the 7-10% range, and did not start to rise until well after stopping pedaling (just like the rider above).  During the 30 sec low level 180 watts after the interval both parameters remained quite low.

As a positive control, just standing over the bike at the end of the ride (no watts, low HR), the deltoid O2 drops below 10% from just raising my arm, verifying both position and sensor performance.


Next - Here is my friends tracing (the fellow with all the endurance SNP's):

What I have tried to show in the above examples is that looking at truly non involved muscle has utility in monitoring pace and training intervals.
As to how we would use this information is still conjecture.
Several scenarios do come to mind:

As always, this is relatively new use of new technology and much more needs to be done.
I will continue to look at costal/deltoid and leg data in the weeks to come.