As seen in the last post, the sport of cross country skiing creates complex choices for the distribution of finite cardiac resources.  Since so many muscle groups are involved, the O2 saturation monitoring of any one area can potentially misrepresent the status of overall systemic energy reserves.  Again we are at a disadvantage in that so little data has been published looking at the normal physiology of O2 desaturation, let alone how to best leverage this to improve performance.  To start the discussion off, I would like to show some more data from our friend XCSkier, illustrating the basic problems with simplistic models of O2 desaturation.

Here is an interval done rollerskiing, with sensors on the RF and VL.
The desat curves are quite different, making usage in a real time or even retrospective nature confusing.

As noted above, the VL drops quickly and slowly rises (despite HR increase) but the RF drops more slowly and stays down.  A study did indicate that there may be inherent differences to how O2 transport occurs in each muscle group: 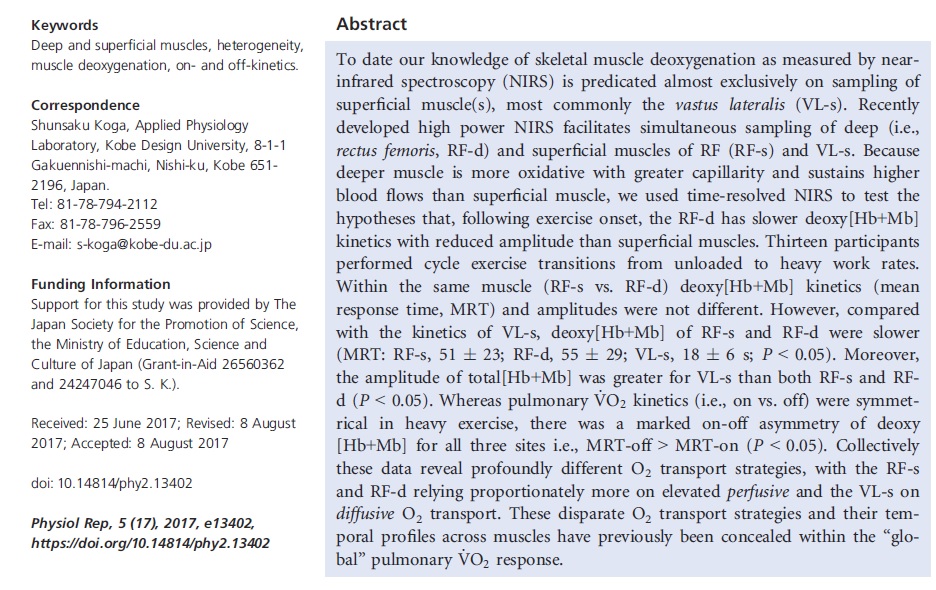 Interestingly, my RF and VL during cycling have similar responses:

Another test done by XCSkier was a "515" protocol (run) advocated my the Moxy people (note that this protocol is not done routinely in the majority of published studies).  Again we have 2 sensors, chest and VL:

The chest in gray does have a relatively smooth decline through the efforts.  The VL though is more complex, note the orange lines drawn to show O2 desat trending within each interval.
In addition, the more intense efforts did not have a step wise drop between them before the plateau at the end:

Circled in blue are the O2 curves and despite the HR progressively rising, the third to last was perhaps even higher than the one before it.  Finally, the yellow marker is a 15 sec sprint, indicating the potential ability to have severe desaturation at both sites.  This potential was not reached in the 515 test.

First the triceps - circle in yellow- triceps desat with drop in THb, just like in we saw in my old weight training posts.  Muscle force causes external compression and Hb drop
Second yellow, hard effort but since he was tired (or more vasodilated at that spot), no drop in Hb.
The fact that Hb rises may indicate some venous outflow obstruction from mild compression.
Lastly, in orange, hard effort until failure(just 1 min and was exhausted) - there was good resaturation before (so he should have been "ready") but no Hb drop during(muscles tired-lack of force and vasodilated)
Great example for the inability of NIRS to take fatigue (muscle and central) into account, as well as not being useful for "readiness for next interval".


Looking at the chest (surrogate for costal):

Early 2 intervals, the O2 desat is there and the Hb pattern looks like venous outflow obstruction (but mild and possibly of no significance).  Harder interval #2 has a lower O2 reached more quickly.
Later intervals of higher intensity:

There is much more variation during the long interval.  The heart rate is slowly rising and one wonders if the effort was leading to more of a global impact than thought.  Some desats near 15%!
The last 1 min(orange) all out leads to the largest desat of the course and is way lower than the triceps which is an active muscle - nice proof of concept in looking at this area as a better index of systemic homeostasis.

The above tracings indicate substantial involvement of the triceps with excellent desats but chest monitoring probably is a better marker of overall physiologic status.  Just because a muscle has regained normal O2 levels does not in any way indicate you are ready to engage high intensity efforts again.


The saturation of active muscles is not always an accurate marker of effort, pace or readiness.  Addressing that issue has been my focus lately and the following are some of the latest opportunities in O2 monitoring.
Two goals, one to validate costal O2 as a realtime guide to race pacing.  The other to find another surrogate that tracks closely but at a site more practical for larger sensors than the BSX.

First question:  Is looking at the O2 tracing when doing a cycling effort on the road a valid way to maximize power?
The following two tracings were done on different days, well rested on the same course.
The first is looking at costal and RF O2 at a power slightly above what I would consider steady state.  Note the first 5 minutes are relatively stable but only on longer duration do the curves drop. Could this be respiratory threshold effects from acidosis and increasing respiratory rate/work of breathing?

Next is the same course at a slightly lower power:

Despite being of longer duration, the curves are relatively flat and within my stable zone (to follow).  This also partly answers question #2, the deltoid area did track very well with no anomalous behavior.  This power range would be most appropriate for longer intervals as well as time trials.

Also in regards to alternate site tracking is a comparison of chest and costal.
This was looking at the RF/costal:

They both track downward and have similar dynamic ranges.
Note also that this power range would not be suitable for longer duration efforts, as the O2 desat would eventually cross into the non sustainable range

Both deltoid and costal desat quickly and to a similar degree.
Note that there is minimal resaturation after the intense effort while cycling at very low power.  This is probably a result of both continued blood distribution away from the costal/deltoid area as well as respiratory muscle use (costal) during rapid breathing.
The comparison of chest and deltoid was slightly different:

Chest desat was a bit slower and recovered later.  What is the significance and reproduce-ability in other subjects is certainly unclear.  The continued desat of the chest could be related to the persistence of high respiratory rate after the supra maximal effort, leading to continued chest muscular activity and higher O2 consumption than the deltoid.
This delayed nadir in chest desaturation was also seen on another day comparing chest vs costal:

It seems reproducible and I am including the data for those out there who are using this site.


One pitfall of the deltoid though.  This is a tracing of simply lifting the arm with no weight at the end of a ride.  Activities with arm motion(running?) are probably not totally reliable for deltoid monitoring:

Finally a word about doing this outside.  All of my data is done in the field (not on a trainer).
Below is a sample of speed and terrain variation during a long interval of 10 min.  I mention this for those of you who either don't like to train indoors, are considering using this in real race situations or use in other sports (XC skiing) where you must be outside.
As shown below, the speed difference is huge at times but the power and O2 sat remain very steady.