Have you ever been in the following situation?  You have just done a high power cycling climb, run or perhaps a cross country ski effort and have gone well into the high lactate zones.  The next part of the course is either flat or even downhill.  Do you coast, very lightly jog/cycle or keep up a near MLSS pace (max lactate steady state)?  What power profile is best to enhance endogenous lactate clearance so you can hammer hard again on the next climb or sprint?  Although your competition may have both superior genetic and acquired fitness attributes, other factors also play a major role in sports performance.  In some previous discussions, we reviewed the "fast start" strategy to reach peak VO2 faster, which theoretically can be of practical benefit in a race situation.  Certainly, in some activities (cross country skiing), the overall efficiency of technique could even outweigh a moderate VO2 peak handicap.
During high intensity exercise, lactate production rises above that of disposal, leading to the predictable lactate excess and acidosis.  Given this situation it would be to our benefit if  there were ways to enhance the metabolic clearance of that excess lactate, possibly leading to better recovery and performance enhancements later on.  This post will be a review and discussion on how potential strategies to reduce lactate after a supra maximal effort.  We will be discussing optimal power modulation after reaching those high blood lactate levels, however there are other possible methods to mitigate lactate effects that will not be touched on (beta alanine, bicarb supplements etc).

I would first like to review 3 papers (in order of publication) that have addressed this interesting subject.  The first paper came out in 2005.  Blood lactate was boosted by a supra maximal effort on a bike, then using different "recovery" loads, lactate levels were measured.  The idea was to see if lactate net clearance was better if the subjects pedaled at moderate power loads vs resting.  Both trained and untrained subjects were tested.
Here is the protocol:

The recoveries are defined as follows:

The VT2 is basically the lactate threshold power (MLSS).
The VT1 is a bit harder to pinpoint but corresponds to - "the point during exercise at which ventilation starts to increase" at a faster rate than VO2 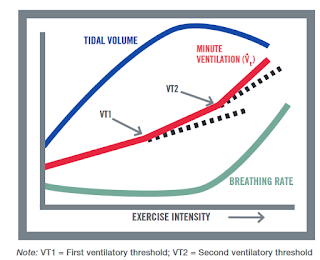 The subjects performed the supramax intervals (120% of the maximal aerobic power) then: 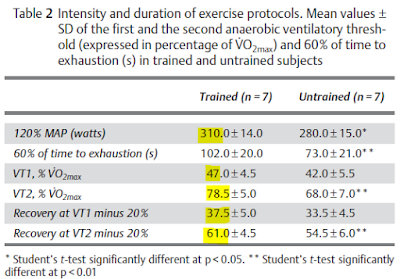 I bolded the combined recovery protocol.  It was the only one that had recovery time at the MLSS. The rest group just sat there, the VT1 minus 20% probably did about 120 watts, the VT2 minus 20% did about 180 watts to give you a ballpark.

How did they do? 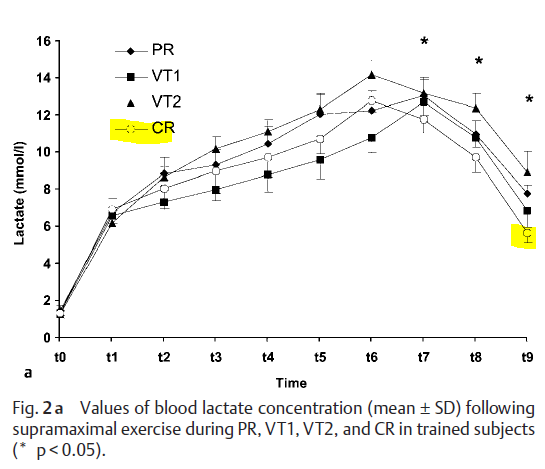 The combined recovery group (who used the highest recovery power), had the best lactate clearance.  In the discussion the authors noted that other studies before this showed better lactate recovery at lower loads.
The conclusion:


In conclusion, this study showed a significant difference between
the effects of recovery modes on peak lactate and lactate
disappearance. CR and VT2 conditions showed earlier peak blood
lactate (4th min of recovery) than PR or VT1 (7th min). We also
found that CR was more efficient for lactate removal than the
other modes for both groups.

The next study was done in 2010 and used running at 90% of the VO2 peak power for 5 minutes to generate lactate.  "Recovery" consisted of running at speeds of various percents of MLSS speed:


Immediately thereafter, participants continued
with the recovery bouts, at 100%, 80%, 60%,
40% or 0% (complete rest for passive recovery) of
the lactate threshold 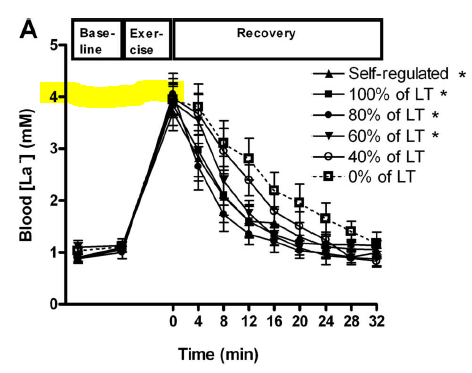 The square boxes are the resting group who obviously had the worst lactate decay curve.
My only concern with the study conclusion is the failure to get higher lactate levels more consistent with those seen in supra max intervals.
It is also unclear why the subjects did not get more acidotic running at 90% MAP for 5 minutes (I know I would have).

Another look at the decay curves: 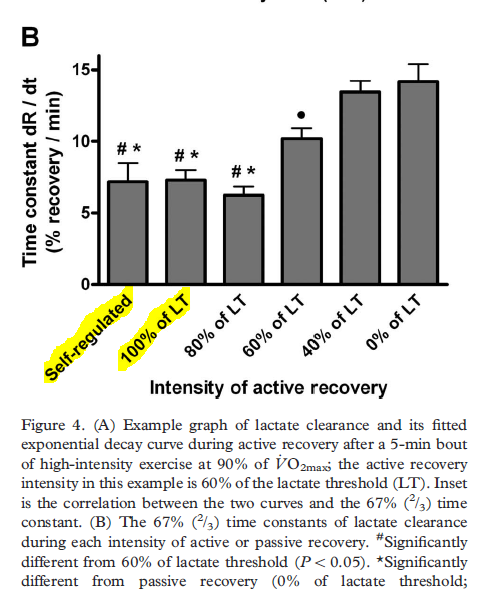 Both self regulated and 80-100% of the MLSS had superior blood lactate reduction, agreeing with the first study presented.
Finally the authors present an intriguing idea: 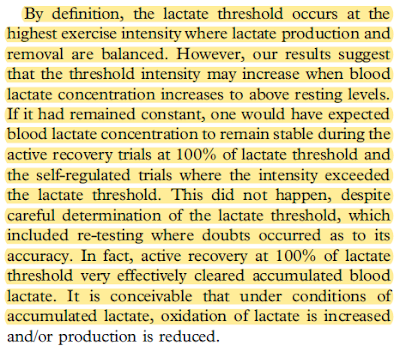 In other words perhaps the MLSS can shift upwards if ambient lactate levels are increased.

In a more recent paper regarding lactate kinetics, a detailed look at appearance and disposal was done at different exercise intensities.  The subjects were split between trained and untrained groups, but we will only speak about the trained.  Lactate kinetics were obtained by looking at radio isotope tracking.  Subjects cycled for 60 minutes at the MLSS, MLSS-10% and an interesting third trial.  This consisted of MLSS-10% power but infusing lactate to match the levels of the full MLSS trial.
Here are the fitness stats for the trained group with a highlight of the MLSS and % of VO2 max seen: 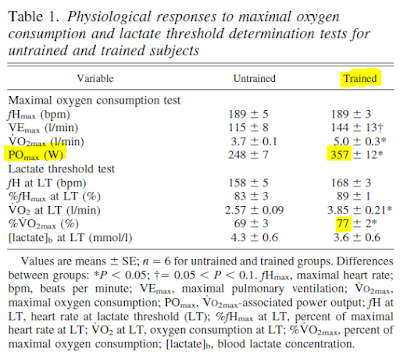 The MAP (maximal aerobic power or VO2 peak) was about 350+ watts - coincidentally close to mine.  The MLSS power was about 259 watts (in the results section).

The results are interesting. 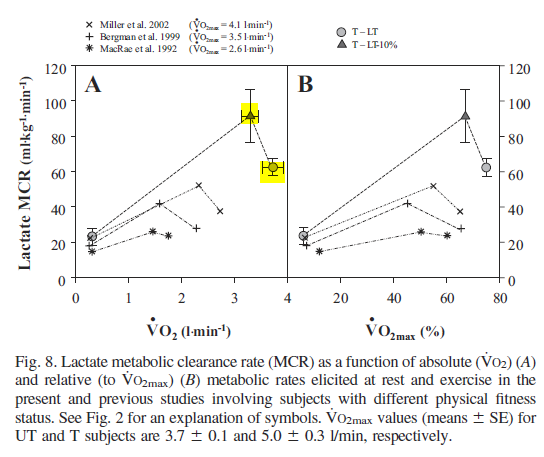 
Fig. 8 illustrates the relationship between lactate MCR and absolute
and relative metabolic rates in the present and former studies
involving healthy men of variable fitness levels. The top curve
in Fig. 8 reflects the very high flux rates obtained in the present
investigation on well-trained cyclists (5.0 l/min) VO2max
compared with the lower curves obtained on healthy men of
variable but lesser fitness levels (2.6, 3.5, and 4.1 VO2max
l/min). In the present study, when PO was raised from LT-10%
to LT workloads, trained cyclists experienced a 60% increase
in [lactate]b, but only a 33% increase in Rd, resulting in a 30%
decline in MCR. These results suggest that at workloads
approaching the LT, lactate MCR declines rapidly

The infusion of lactate at power levels 10% below MLSS did improve the disappearance rate: 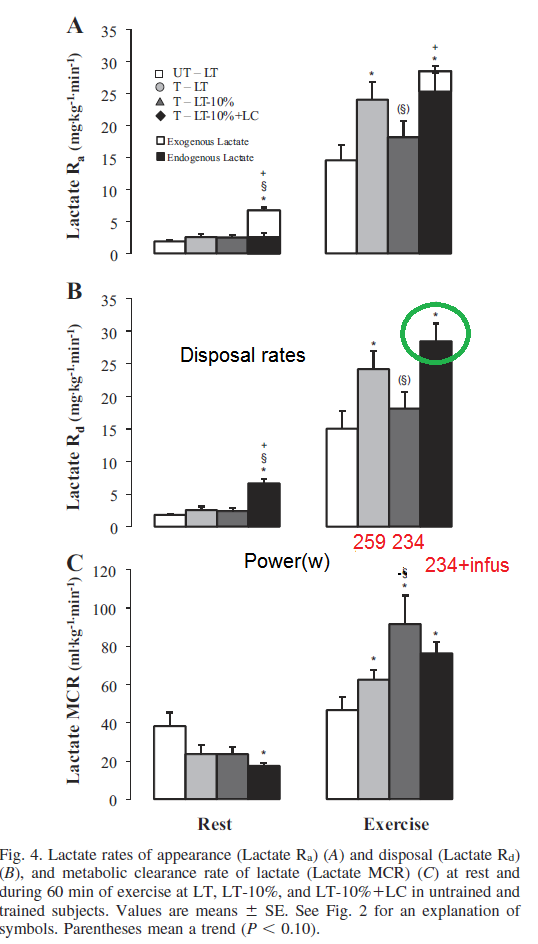 I included the power levels and circled the best disappearance rate which was at the lower power with infused lactate.

Finally the bottom line from this study:


We conclude that although endurance training increases the capacities for
lactate production, and disposal and clearance for higher absolute
and relative workload, the LT represents the point at
which clearance of endogenous lactate becomes limited.

A comment on this study:
It may have been very helpful to have infused lactate at different rates to see if a higher serum level would have further enhanced the disappearance rate.  In addition, the final levels they did attain were not very high (4.3 in trained) and would not match levels post supra maximal efforts.

My data:
To try to best simulate some of the above studies, the "active recovery" was preceded by a 3 minute interval near the VO2 peak/max power also know as the maximal aerobic power or MAP.
The procedure to boost lactate was:
MAP-10w then a recovery at MLSS-14%:
On the first trial below, no coasting was done between segments, after a priming segment of near MAP 340w x 3min, I immediately did an interval of 216 watts average (approx 86% of MLSS) for 5 minutes.  To demonstrate that indeed the ventilation, HR and HHb would shift with higher power, a mini sprint was done near the end. 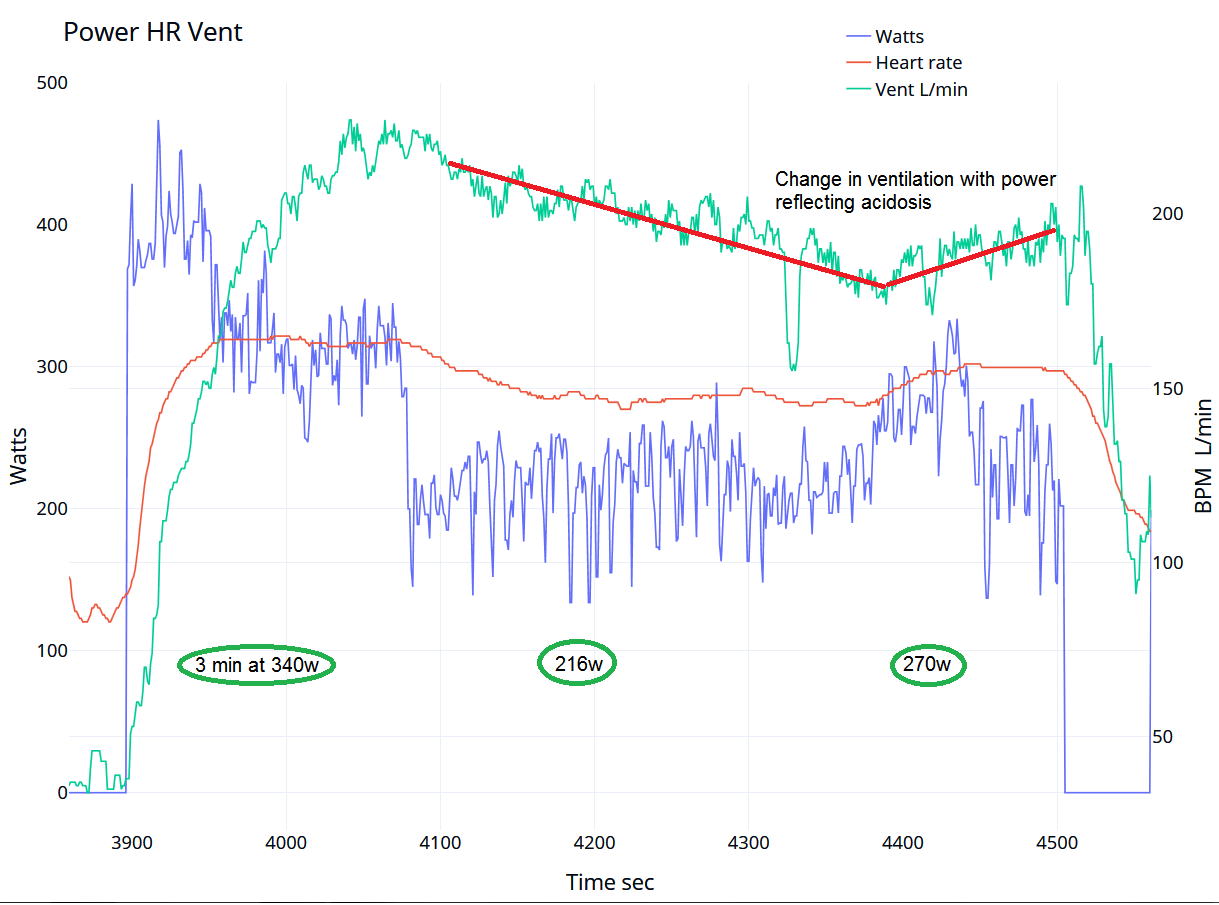 NIRS, muscle HHb:
Since in certain situations, muscle HHb seems to track with lactate buildup, does this parallel the above?
Here is a tracing of costal, calf, rectus femoris and vastus lateralis HHb: 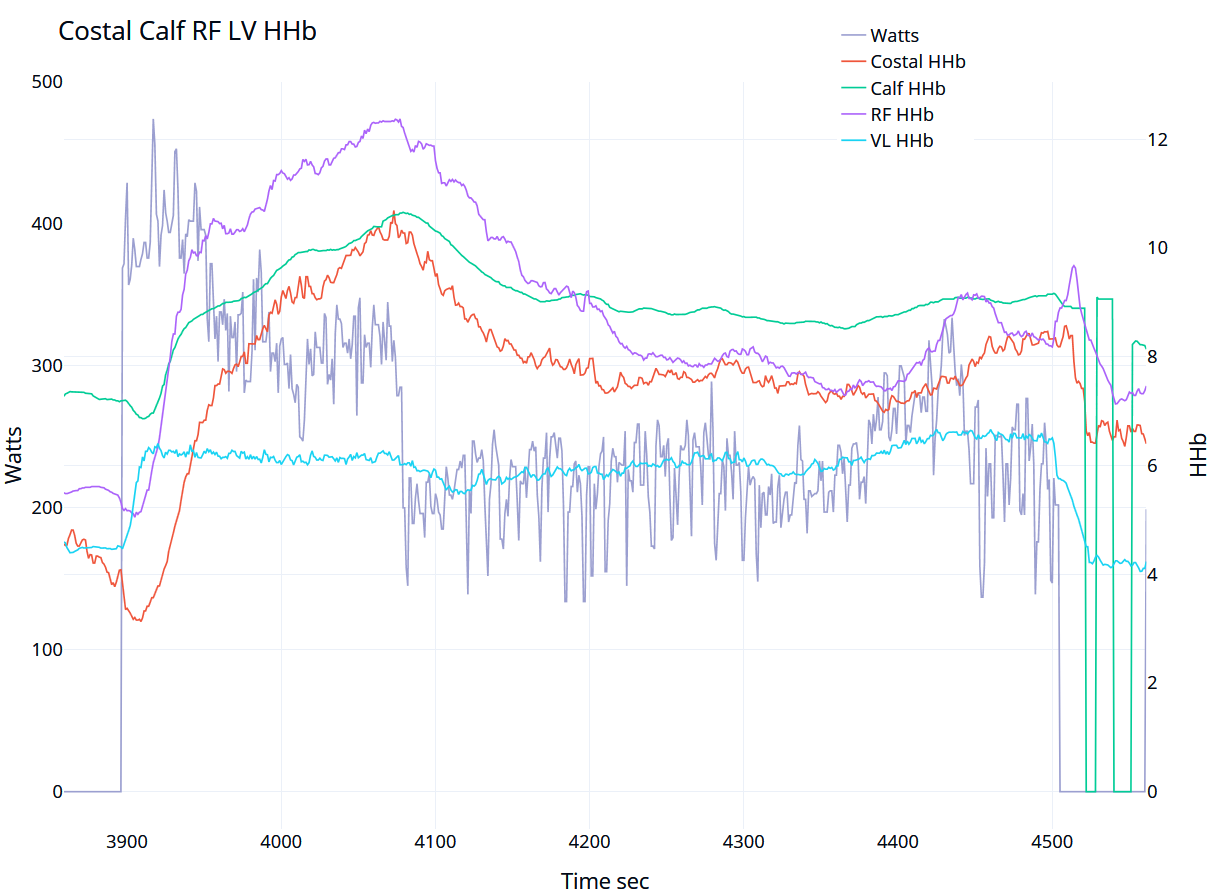 On first glance, the groups seem to track well except for the minimal change in the VL and mild changes in the calf.  So let take a better look without those two. 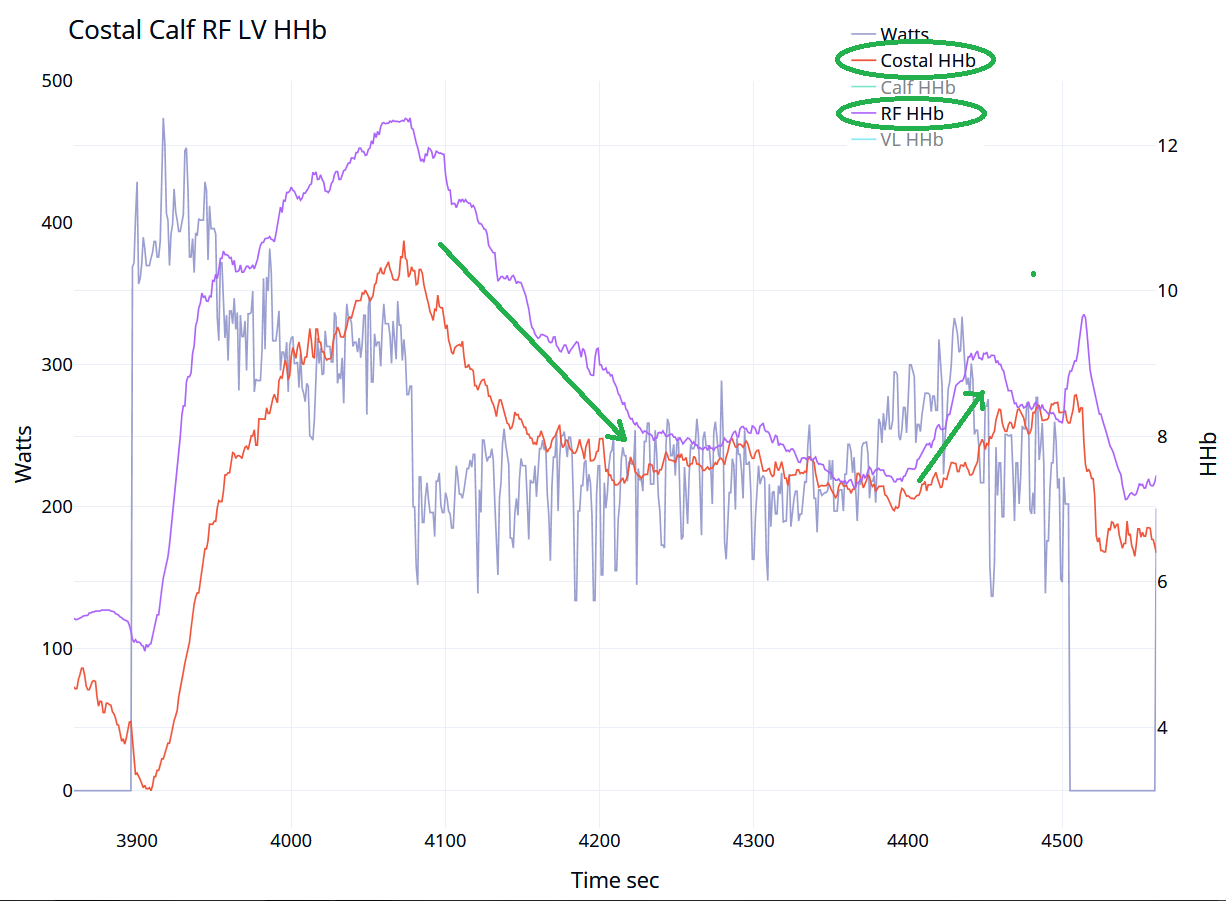 Full MAP then a recovery at MLSS plus minus:
The following series were done a bit differently.  The first 3 minute supra max effort was at VO2 peak power (about 350w), then a 60-90 second coast, followed by 5 to 6 minutes of a constant near MLSS power.  I will label each set by their recovery power. 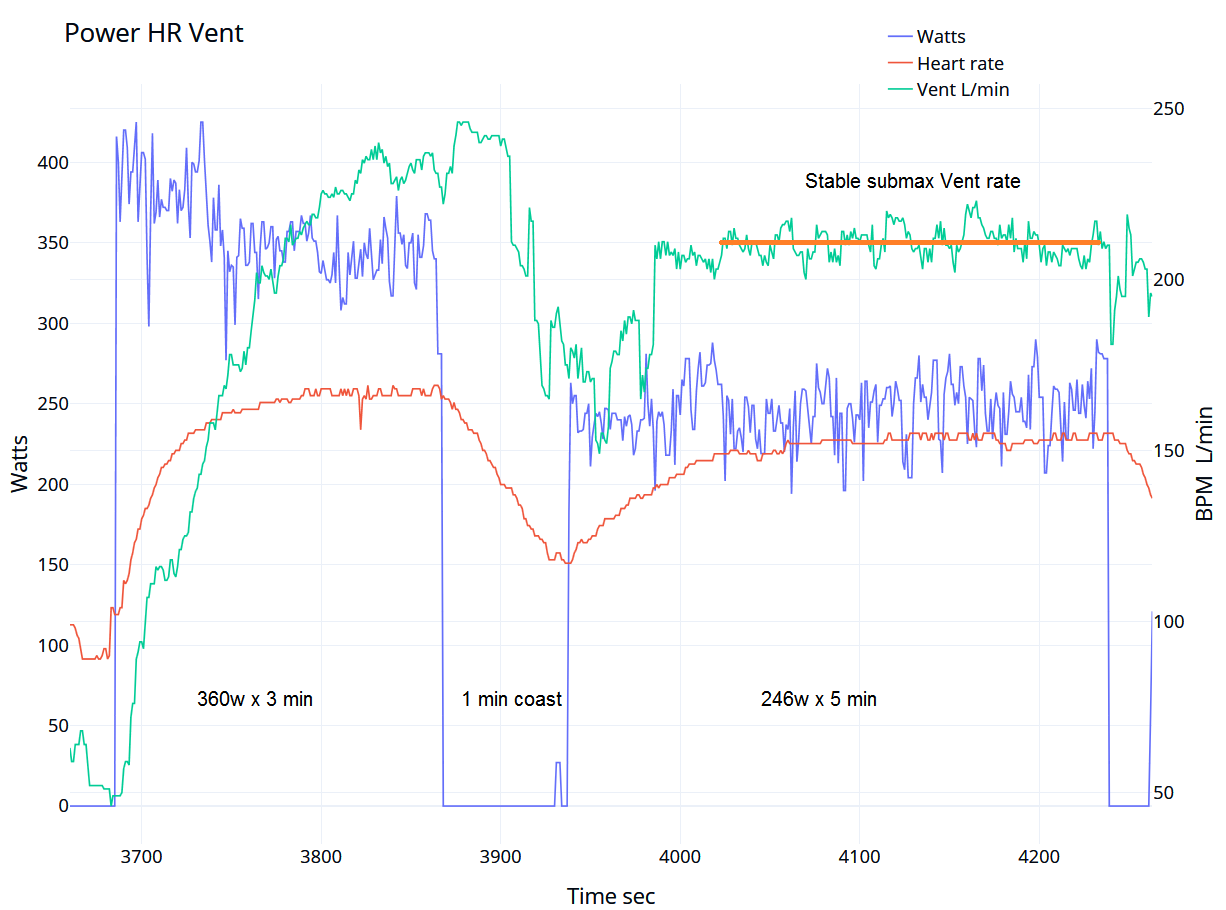 HHb tracings at just under MLSS: 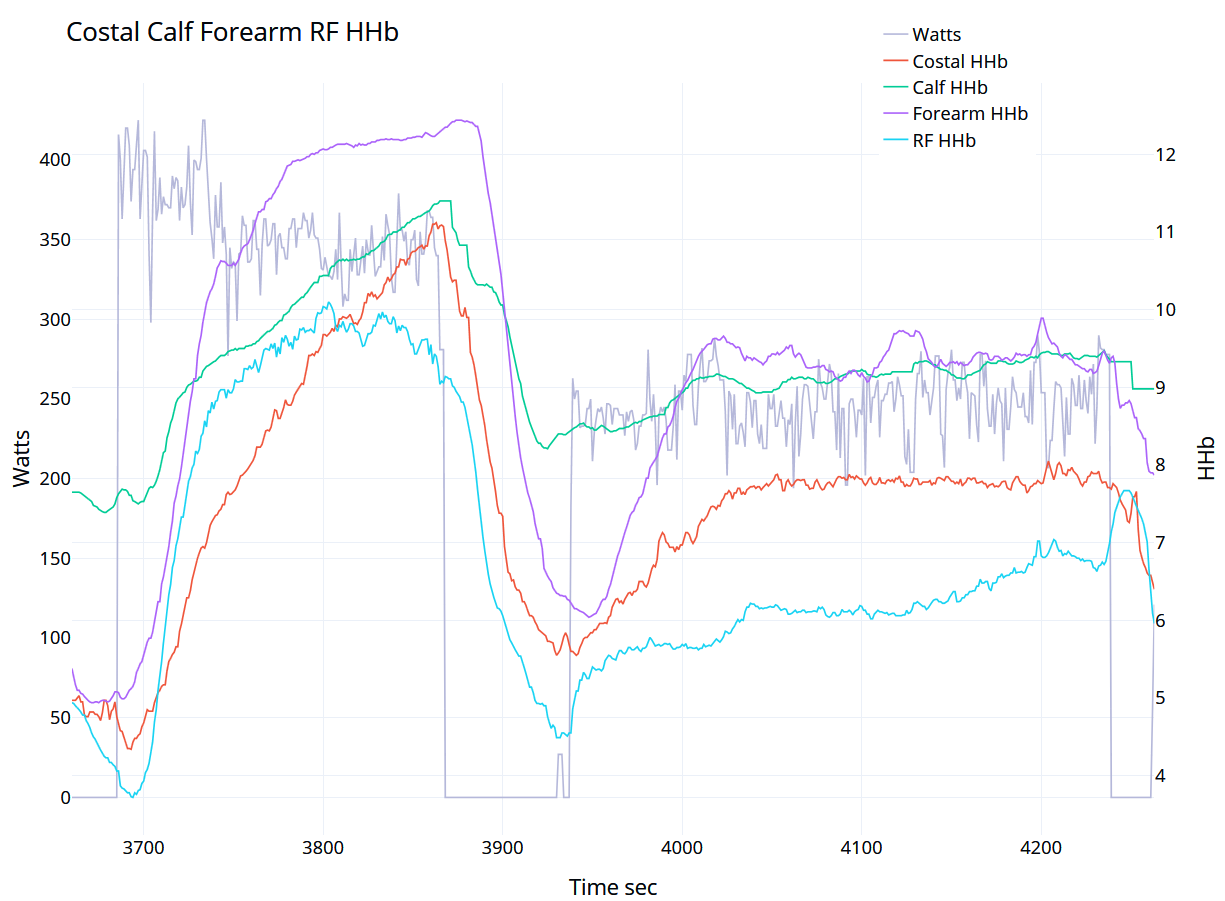 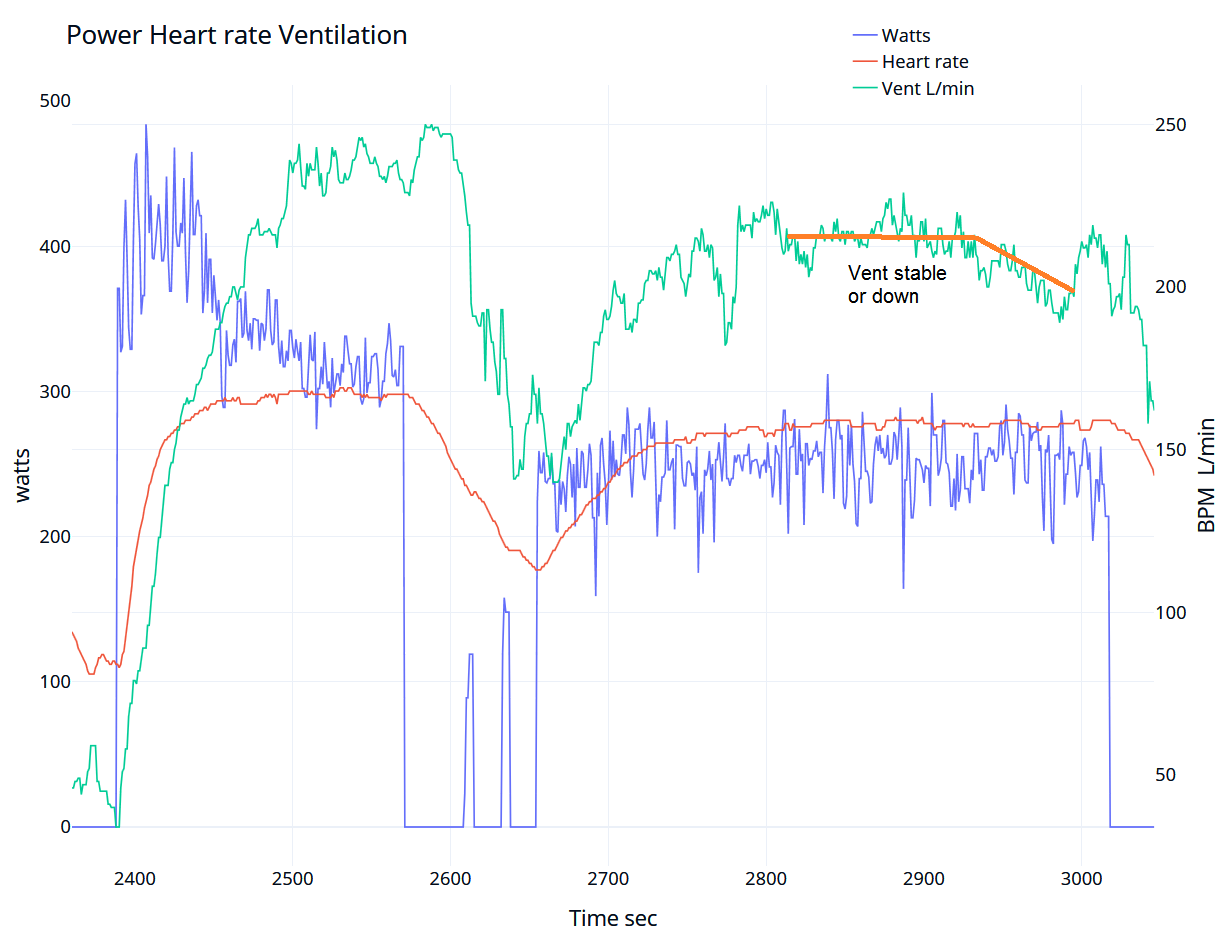 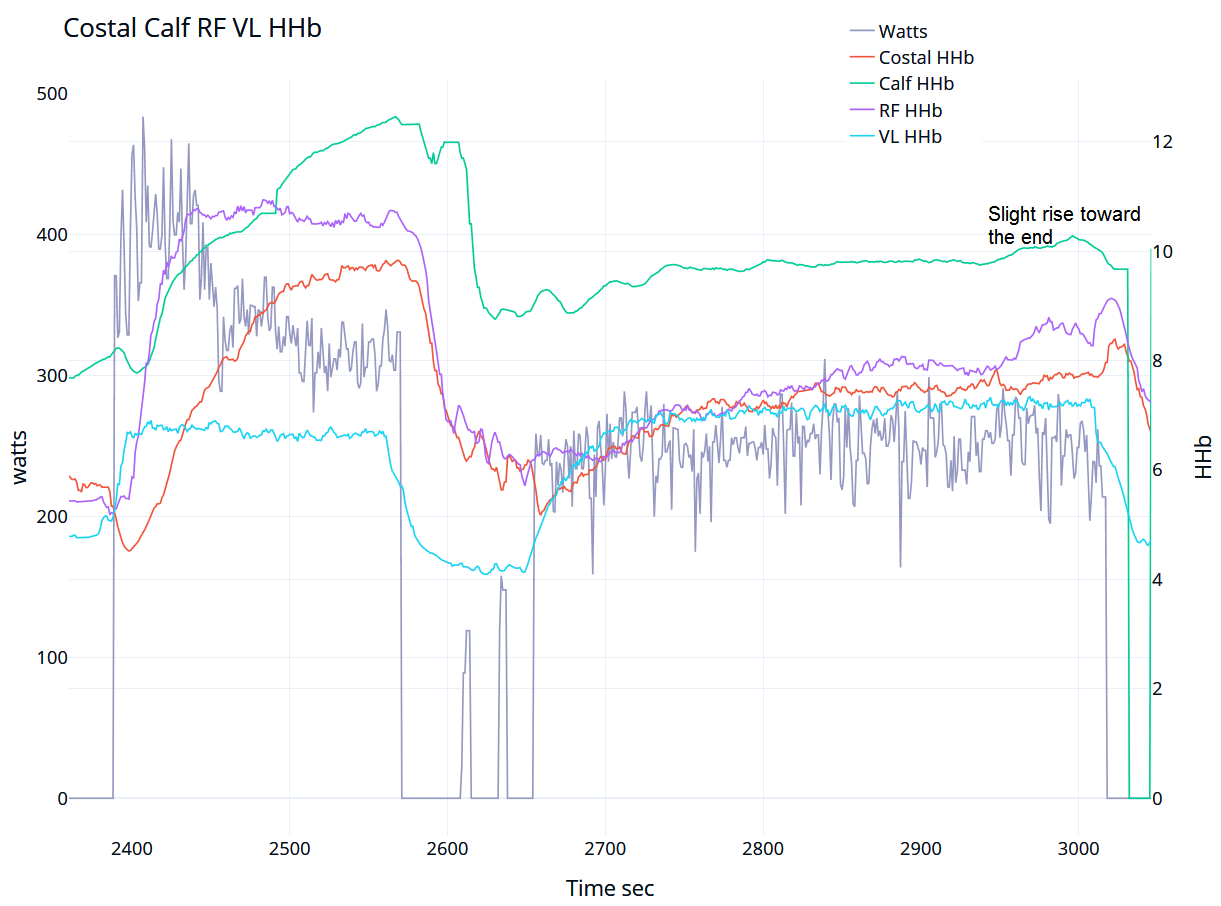 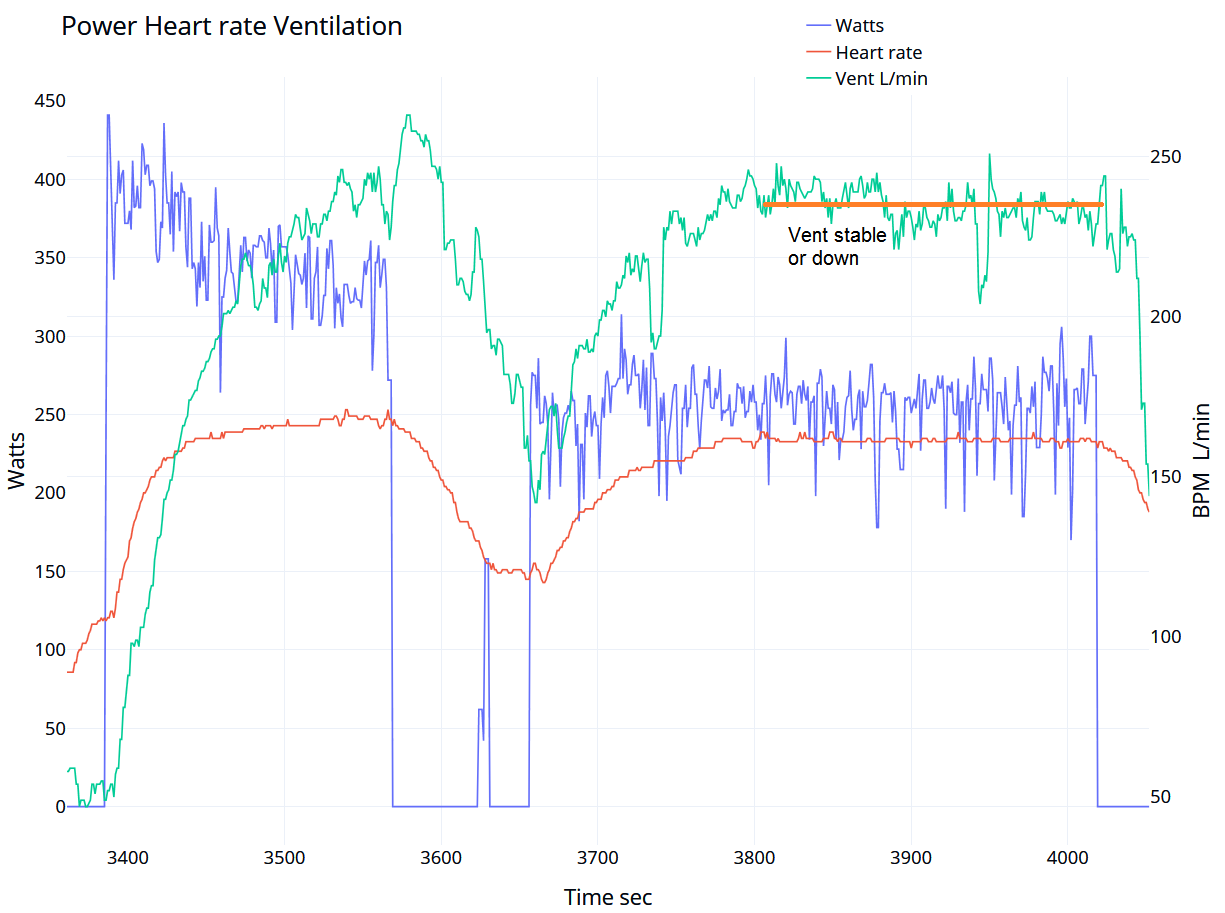 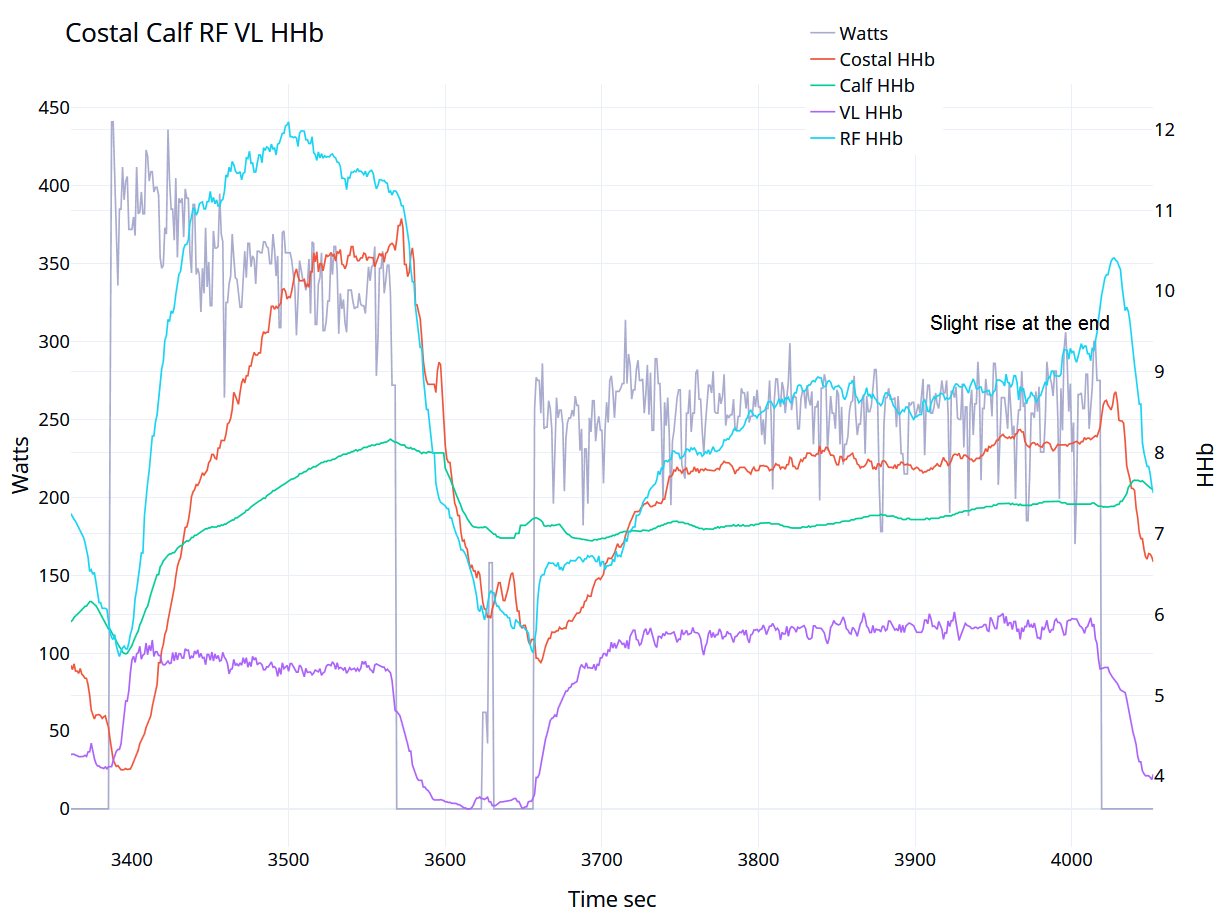 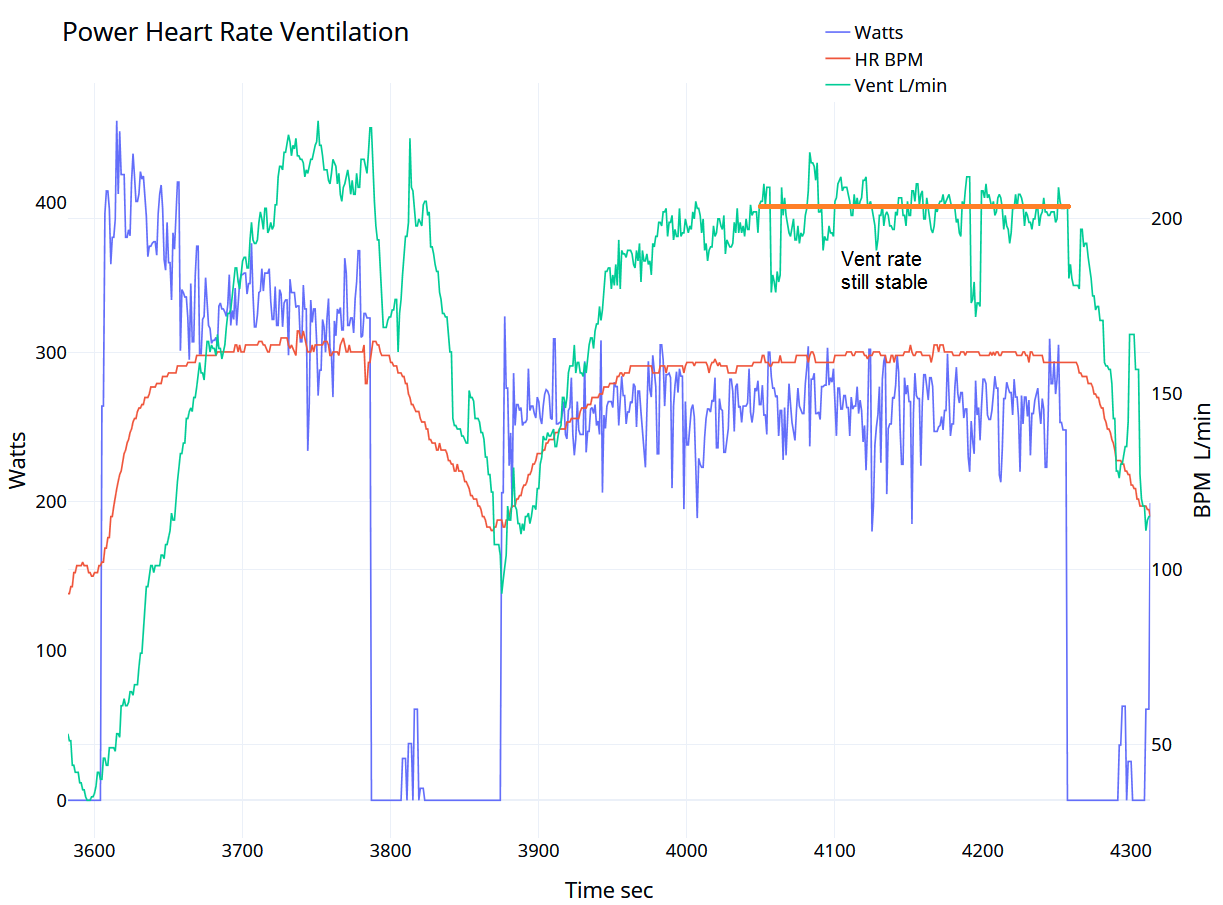 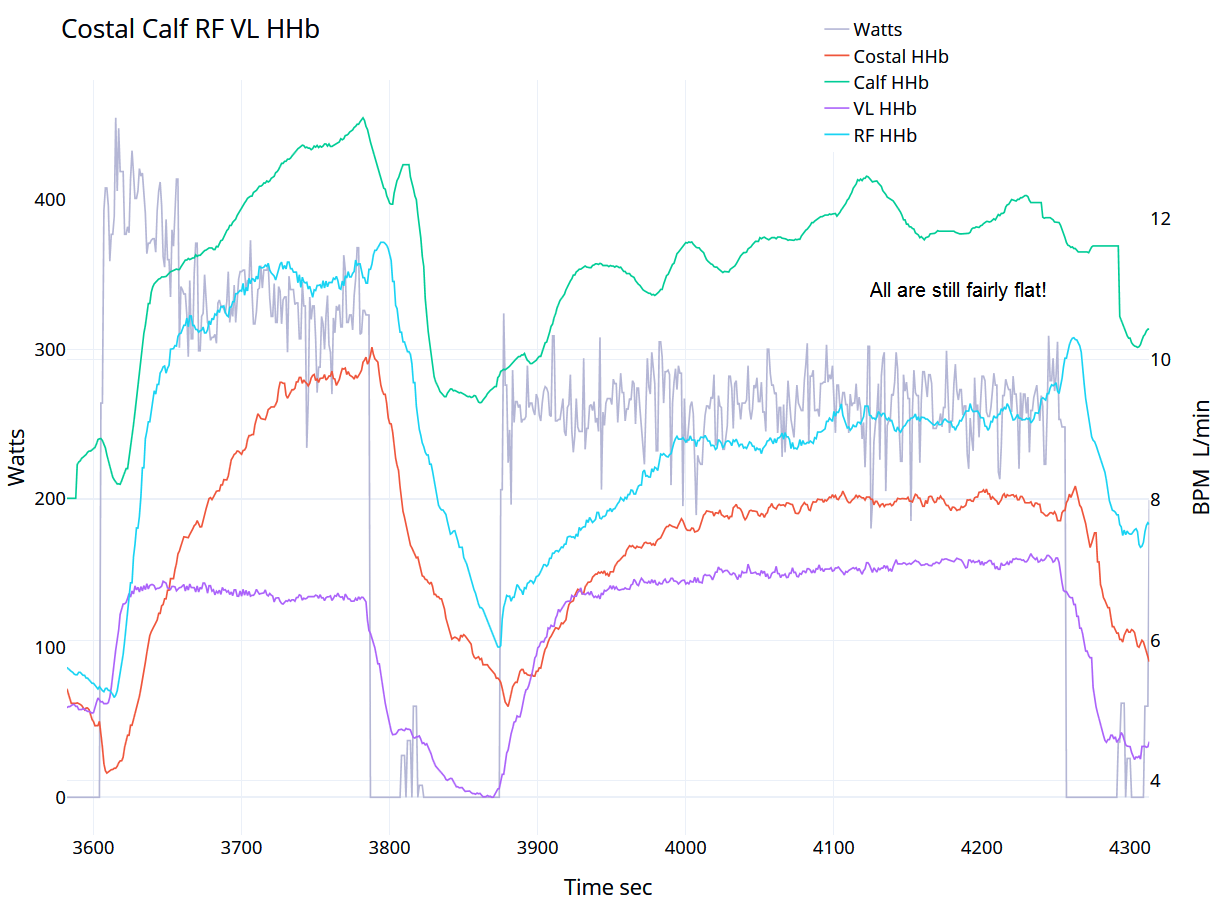 Recovery at 275w (here the term "recovery" is loosely applied): 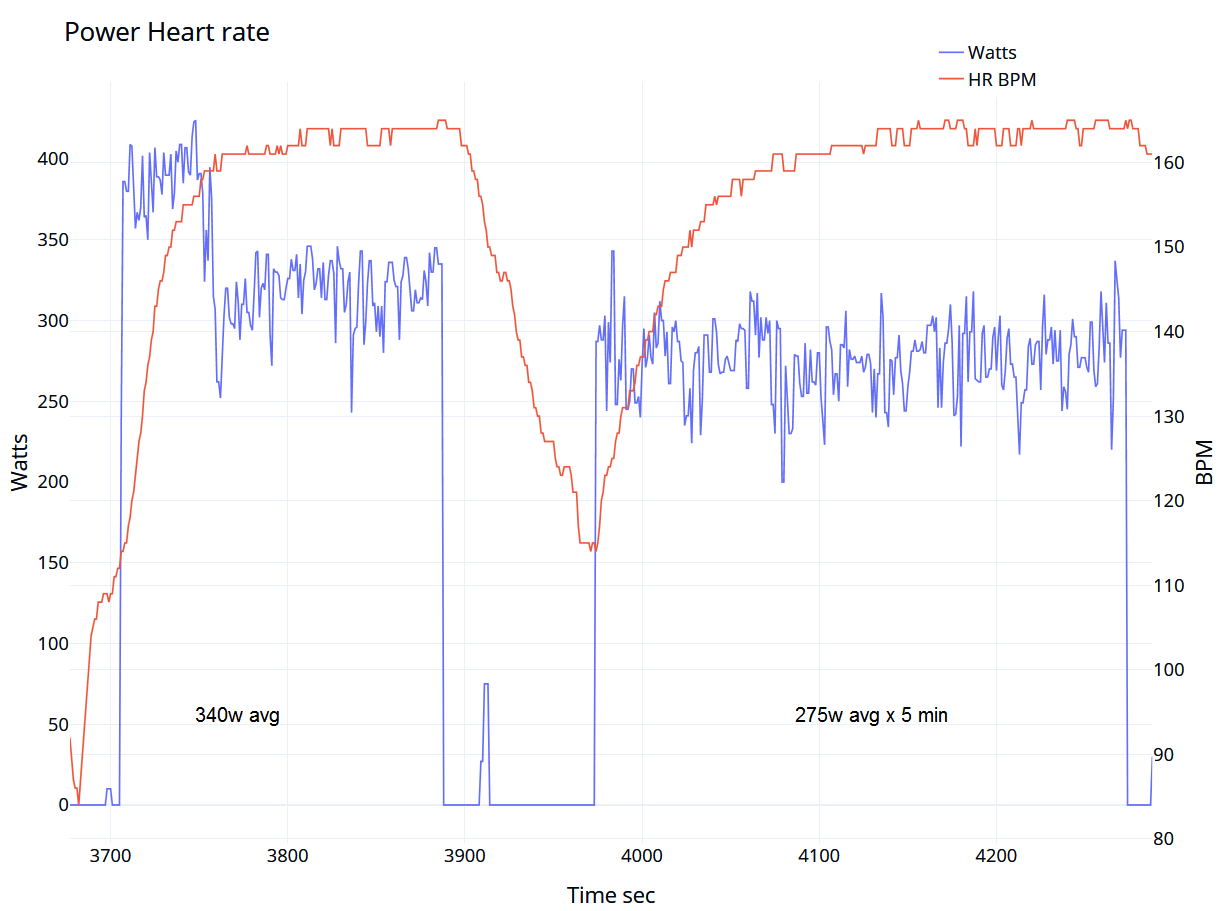 I do not have ventilation data since the Hexoskin module did not record the ride.
Let's look at the HHb, especially the costal area which tracks well with ventilation. 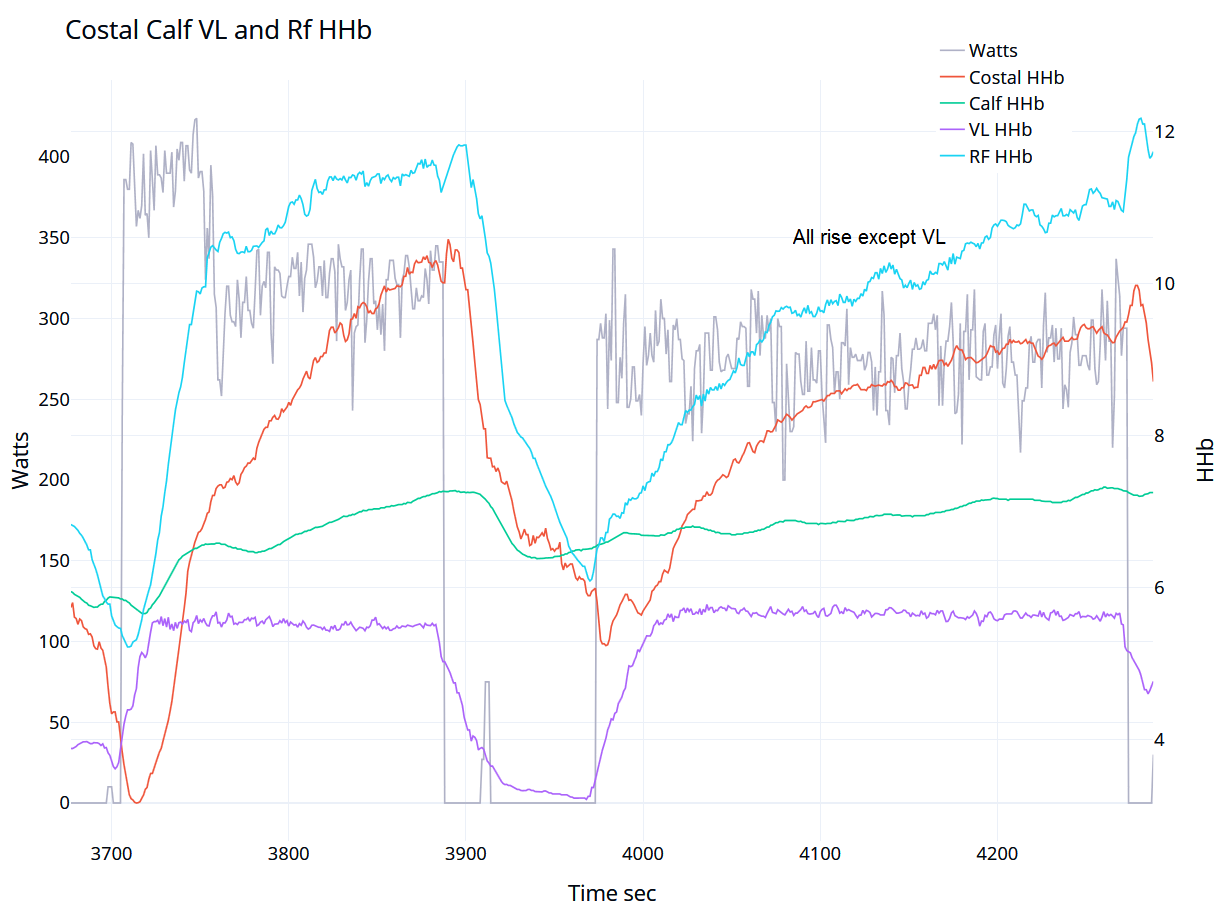 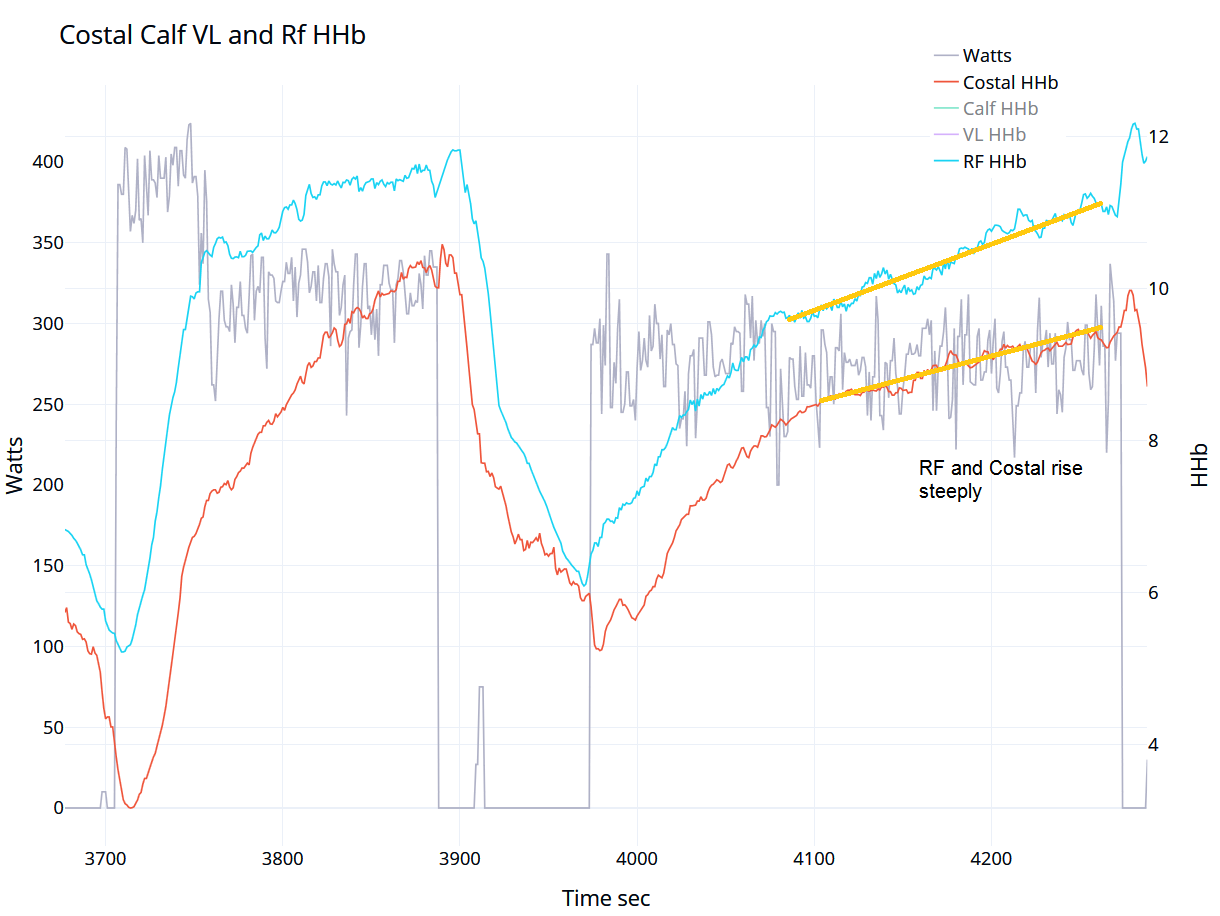 One of the conjectures from the paper above was that a high existing ambient lactate would create a condition where "disappearance rate" would be higher than if a lower level was present.  In other words, would a recovery interval look different if it was preceded by a high lactate vs a lower lactate priming bout?

Since I did a 262w recovery (above) that had little in the way of ventilation and HHb change, let's compare to one I did on a prior post.  At that time I did a priming interval of only 235w (instead of 350), which should not have elevated lactate by much if at all.

Where does this leave us in regards to strategy?
It would seem that after a significant exercise effort above the MLSS, the best way to speed the disappearance of lactate would be to continue at a level between 80-100% of the MLSS.  It may also be possible to further enhance the clearance of lactate at power above the MLSS, if the ambient lactate levels are very high (conjecture).
So contrary to the method done by many of doing a high power interval (cycling or skiing up a hill) followed by a absolute rest (coasting down via the bike or ski), it should be more effective for performance and recovery to actually continue downward at a reasonable pace.
To further explore this strategy, let's examine a paper on recovery methods in alpine skiing.
Methods:

We used highly trained alpine ski racers in a randomized
controlled trial to investigate the effects of on-hill active
recovery performed between training runs on blood lactate
clearance and fatigue. The skiers were randomized to either
an active recovery, comprised of a 3-minute walk with ski
poles, or a static recovery control group who remained
stationary in their skis.

Each participant performed 8 runs in their
respective training course and performed their randomly assigned
between-run recovery protocol, either active (ACT)
or static (CON) recovery, at the top of the training course
before each run. Blood lactate and perceived fatigue were
measured immediately before they started their run at the
top of the course and within 2 minutes of completing their
run at the bottom of the course

Comment - The active recovery was a a low level without measurement of "power".

Better lactate at the top in the active recovery group toward the end of the runs. 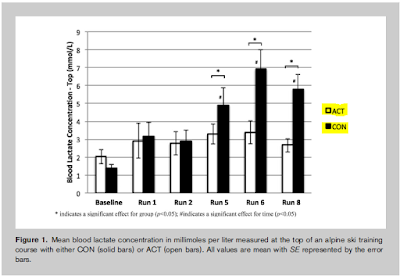 Lower lactate at the bottom of the course in theactive recovery group: 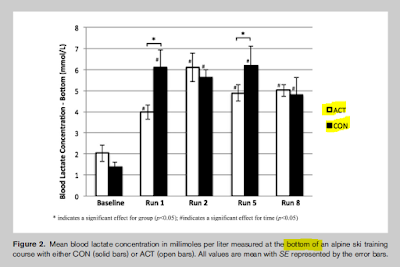 Faster time to completion in many of the active recovery runs: 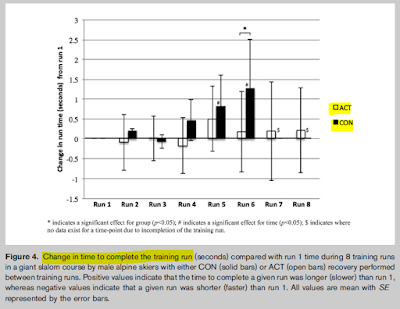 
Did not finish rates were recorded for all
participants. Eleven DNFs (incomplete runs) were recorded
in the CON group, of which 8 were in the last 2 runs, compared
with 0 DNFs in the ACT group (Figure 4).


Our findings show that on-hill active recovery performed between
training runs in alpine ski racers is effective at facilitating
lactate clearance from the blood. The group performing
active recovery between runs showed faster average training
run times throughout the session and lower incompletion
rates, despite no differences in perceptions of fatigue. In
addition to the improved performance (run time), the
importance of completion rates for technical and tactical
skiing ability, and the greater risk of injury that accompanies
incompletions, this is a critical implication of active recovery
performed between runs for alpine skiers.