The boundary between sustainable and unsustainable exercise is an important parameter to be aware of.  Several terms have been used in the literature including critical power, maximal lactate steady state, and various flavors of the ventilatory threshold.  In the last post, I reviewed a simple "lazy man's" way of very precisely determining cycling power at the lactate threshold.  Knowing this power figure, I thought it would be interesting to look at the various metrics already discussed at a slightly higher power.  The logic here is that at a slight boost in power, the steady state is lost, and perhaps we will be able to capture that departure while riding on the road (not in a lab).  Which physiologic metric (in my test case) best indicates the "breakpoint", will also be addressed.  Instead of going into detail about critical power, lactate threshold and respiratory compensation point, I have linked to some good reviews on each subject to streamline the post.

The following data is from a road ride using BSX sensors on the L VL, R RF, L costal area, Hexoskin shirt, Assioma DUO power meter.  After about an hour warm up, a 5 min relatively constant interval at my previously measured lactate threshold was done, followed immediately by another 5 minutes at that power +25 watts.  Although I could have used a smaller power increment, I wanted the results to be obvious and as shown on the prior post, 10 watts over the limit did not show much in the way of change (but only over 4 minutes).
In addition, I wanted to get closer to (or exceed) the RCP (respiratory compensation point).  This should cause a substantially higher respiratory rate/ventilation, work of breathing, thus taxing the costal muscles to a greater extent.

Two views of the same data (Cycling analytics and Garmin):

The costal O2 drops after about 90 sec to a very stable 50%, and remains there until the second interval of LT+25 watts.  At that point, it progressively drops on a near straight line trajectory to 38%.  Historically, (in my case) I can get down to about 5-10% potentially, so I still had some reserve left here.
The RF did drop in each case, but only from a baseline of 60% to 54% in the first, 52% in the second interval.  So although probably real, within the noise range somewhat.
The VL data is here:

The VL also drops, with the second interval downsloping, but the net percent change is again quite small, curve slope shallow. 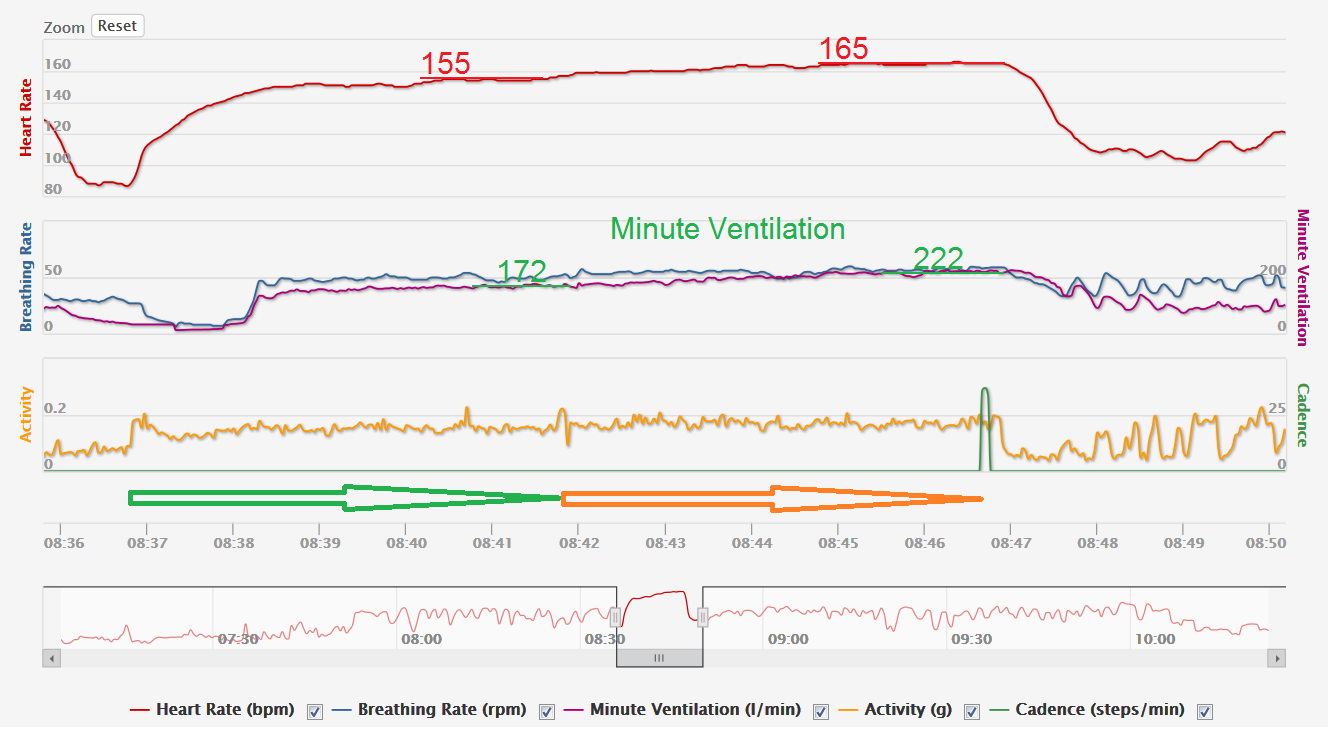 The green arrow is the LT interval and the orange arrow LT+25 watts.
I attempted to put straight lines under the numbers to indicate some degree of stability over 30 seconds or so.
Minute ventilation was a steady 172 +- in the LT effort vs 222 at the end of LT+25.  As seen in the prior post, minute ventilation appears to be a very sensitive indicator of effort around the lactate threshold.
There was a change in end interval heart rate of about 10 bpm.  The extra 25 watts definitely caused a difference here as opposed to just 10 watts.

A close up of the ventilation data: 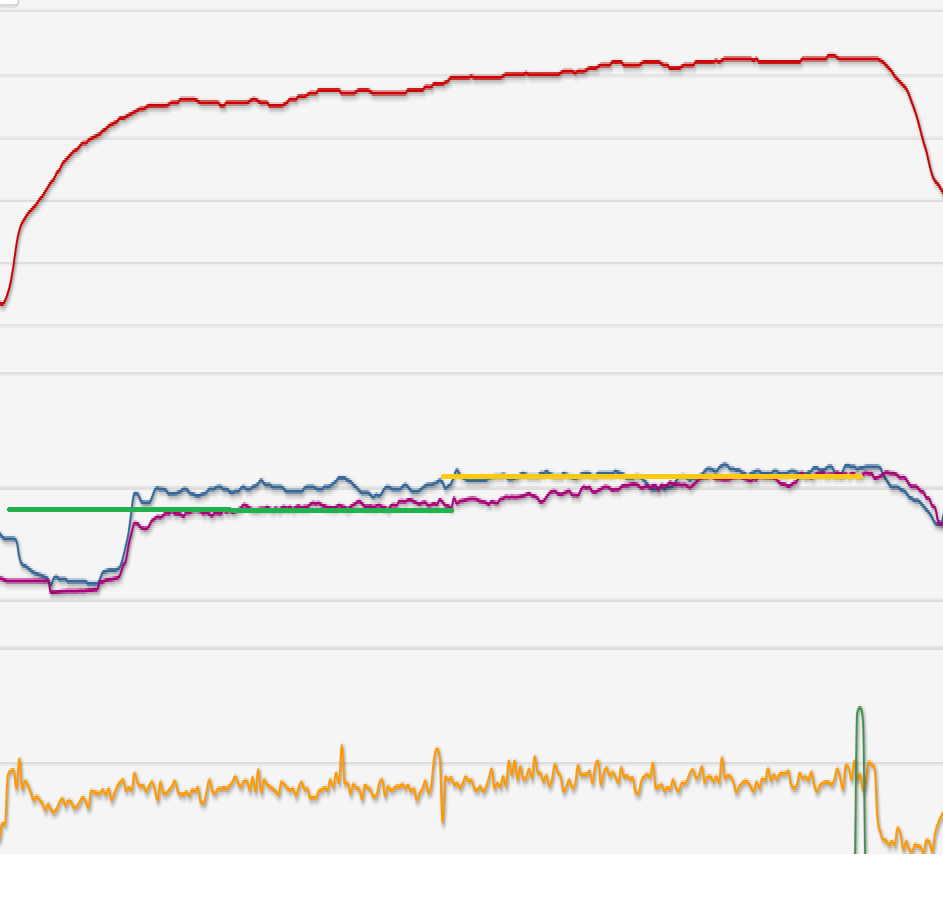 I drew a green line showing how steady minute ventilation was on the LT interval.
The yellow line is tracking ventilation toward the end of the LT+25 effort, rising rapidly then plateaus at about 220 is my historic max.

What does all this indicate?

A few comments about the RCP
There have been attempts to equate the MLSS/CP as somewhat equal to the RCP.
A recent excellent "rebuttal" to that was recently published.  The authors argue that the RCP must appear after the LT by definition (you need an acidosis to cause the RCP which occurs after LT).
Here are the relevant passages:
First, the important understanding of the RCP 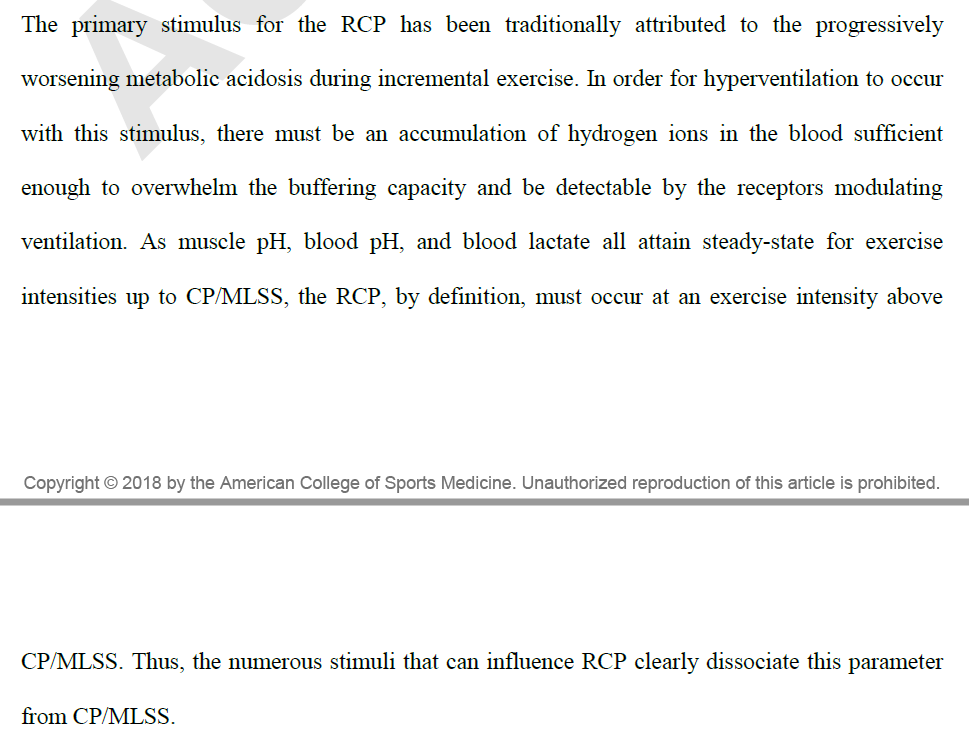 Second, they also address the use of NIRS, namely muscle O2.  The difficulties and pitfalls of using this are discussed: 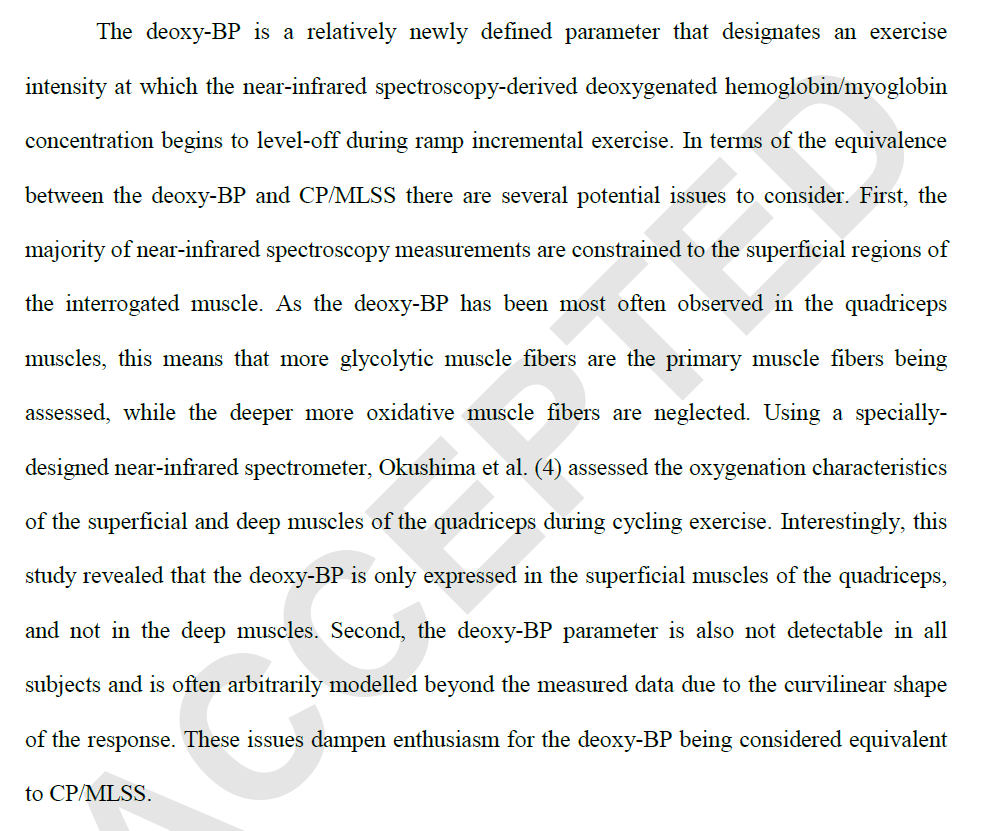 Lastly, the order of breakpoint occurrence: 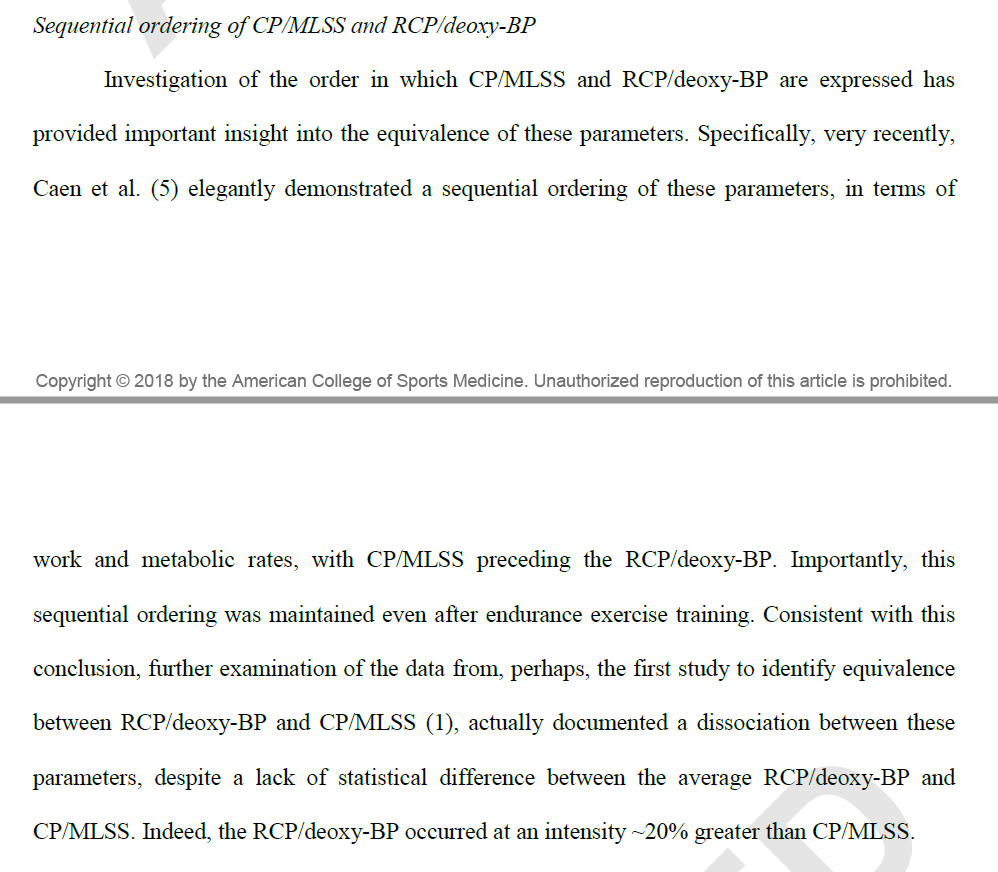 Interestingly, they mention that the RCP generally occurs about 20% higher than the MLSS.  That coincidentally is near the LT+25 power tested above (I used 10%).  When I performed my lactate threshold, 10 watts (5 percent) did not seem to cause the changes noted here.