DFA a1 vs intensity metrics via ramp vs constant power intervals

A popular theme of endurance training is how to measure the various physiologic thresholds.  Not only is this helpful in monitoring current performance level, but perhaps as useful is it's role in delineating training zone markers. Zone 3 (of a 3 zone model) is heralded by various concept ideas such as MLSS, RCP, VT2 and LT2.  These have been discussed before.  More importantly (in my opinion) is the transition from zone 1 to 2.  If inappropriate time is spent in zone 2 many negative consequences could occur.  As we age and recovery strategies become important, improper time in zone 2 becomes even more problematic.
The non linear HRV index, DFA a1 may have great promise as a means of measuring exercise intensity and training markers.  Whether this will translate to a practical, non invasive clue for zone 1 to 2 transition remains to be seen.  In order to answer this question, further studies are needed.  As shown previously, some particular hurdles need to be jumped over to obtain accurate data, including avoidance of artifacts in the RR series.  Perhaps of equal importance is the method of ascertaining the change of the index as intensity rises.  A time honored approach involves doing an incremental exercise ramp (to failure).  As an example, the "gold standard" incremental ramp for VO2 max, also includes measurement of VT1 or LT1, both accepted markers of zone 1 to 2 transition.  LT1 can also be measured by longer steady state intervals of 4 to 8 minutes in length and they are usually equivalent (depending on ramp slope).
With a non linear HRV index that's measured over a span of 2 minutes (hopefully representing a state of equilibrium), we can't be assured that a calculation is proper or accurate since the ramp is not steady state.  In the past I have obtained DFA a1 values from 5 minute constant power cycling intervals, with values taken over the last 2 minutes.  However, most (?all) currently published research on the DFA a1 relation to intensity is based on the incremental ramp.  For example here is a figure from studies of Hautala (first) and Gronwald (second): 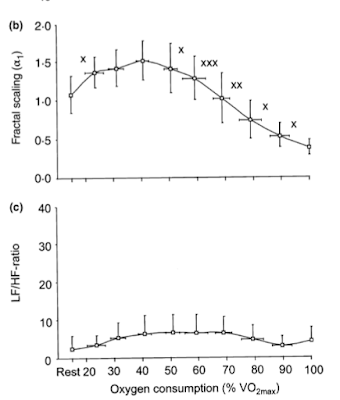 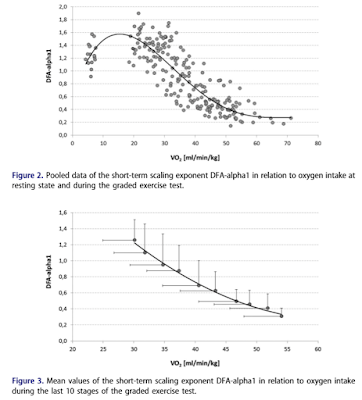 The question arises, would a ramp derived value for DFA a1 correspond to one taken from the end of a constant 5 minute segment?  Based on the article last year from the Murias group, a slow ramp would largely negate the "mean response time" lag of VO2 parameters.  The following post aims to provide some preliminary data comparing slow ramps vs 5 minute constant power intervals in regards to DFA a1 behavior and value range.

Methods - all studies were done after identical light meals, about 8am, using the Hexoskin for RR recording, on an Elite Suito smart trainer, Assomia Duo pedals and with Zwift controlling both ramp progression as well as constant power.

As an aside, the Hexoskin provides an ideal platform for obtaining artifact free single lead ECG data for HRV.  Here is a screen recording from my android phone during one of the sessions:

The waveform is downloadable and important for both arrhythmia detection and artifact confirmation.

Kubios software (latest version 3.3.1) was used to determine both average heart rates and DFA a1 for the 2 minute measurement windows.  There were no artifacts except in one tracing where a single APC (atrial premature contraction) was noted.

A total of 3 segments for each of the 3 intensities was plotted by averaging the DFA a1 at the last 2 minutes of each active segment.
For example here is the series of data points from the 4/22 session: 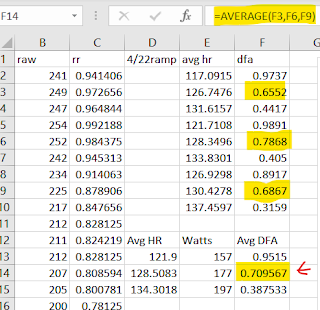 
DFA a1 vs Watts
Blue arrows represent the point where DFA a1 reaches .7 and .5 values.  For more detail on what these numbers mean please read this or this. 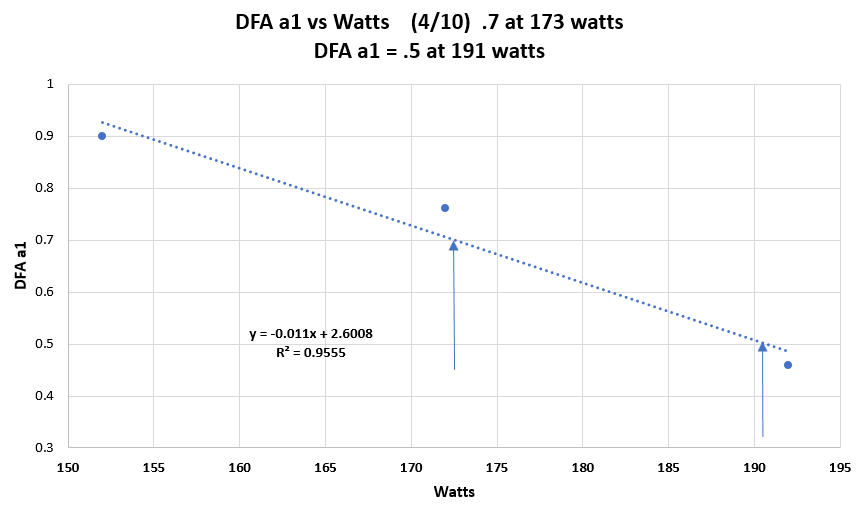 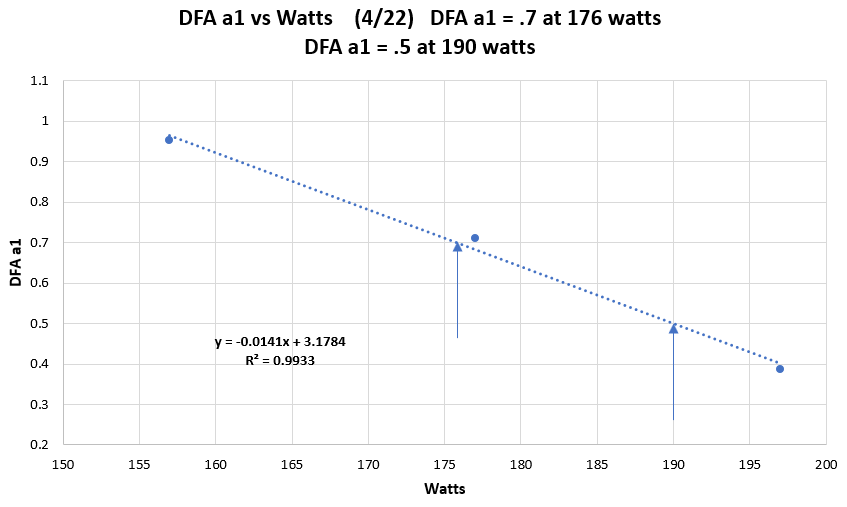 How does average heart rate vs DFA a1 look? 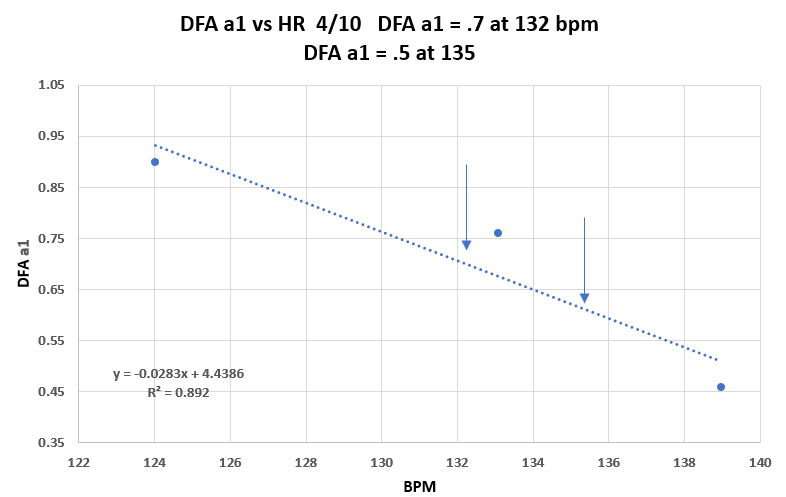 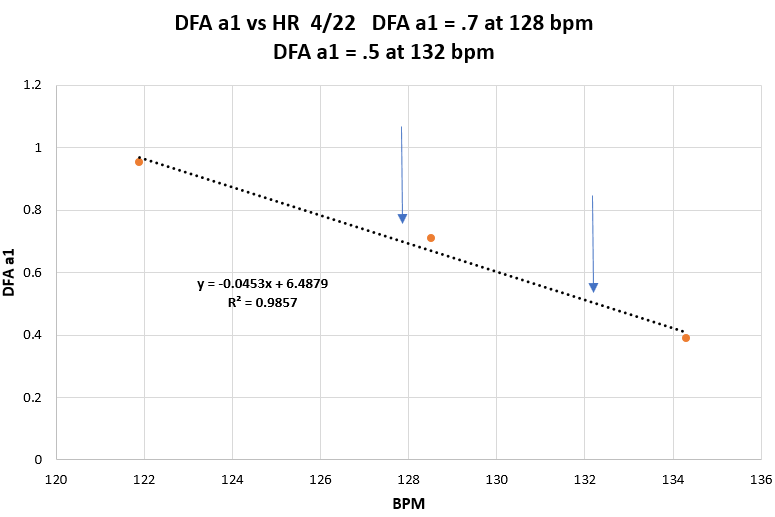 To put this information in some sort of personal historic perspective, here is the data presented in my case report several months ago (also at 5 minute constant power): 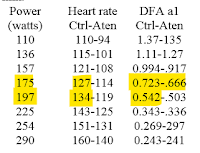 The overall figures are in line with the above results.

Now that we have an idea what 5 minute constant power interval data looks like, the next step is to compare this to a continuous ramp.

The first ramp protocol was 10 watts per minute which is a commonly used protocol (otherwise known as 30 watts per 3 minute), starting at 100 watts (after a 20 min warm up).
Zwift ramps are a bit different though, they are truly continuous - there is no abrupt jump between stages.  So if you were to do 10 watts per minute incremental rise, the trainer would steadily increase power every second as an equal fraction to maintain that pattern.

The following is a 100 to 310 watt ramp to almost failure, done over 21 minutes, therefore 10 watts per minute:


This is a standard data extract from Kubios with measurement windows every 120 seconds: 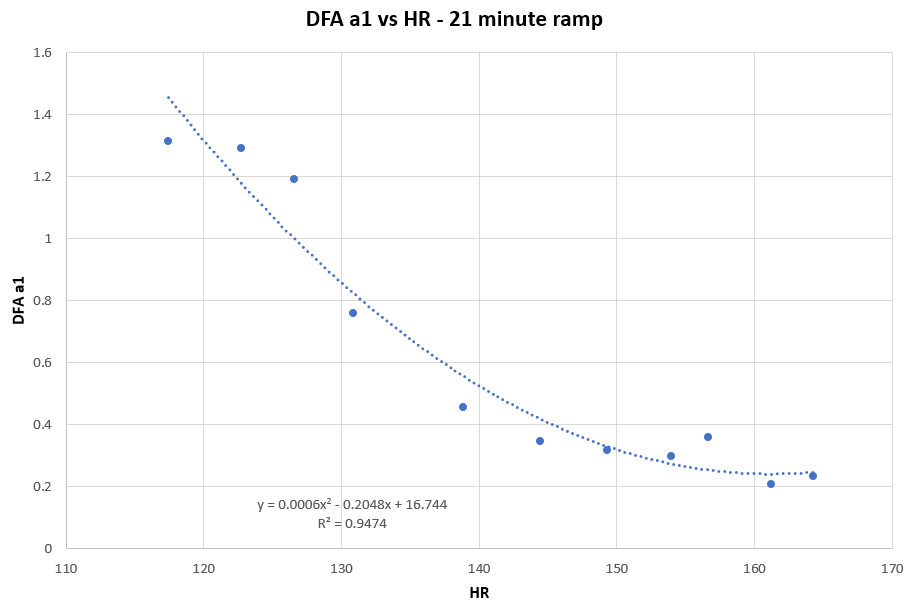 Although one can draw a line through the points to get reasonable regression formulas, I decided to try something different.  The following is also an extract from Kubios, but with recalculation of 2 minute data every 20 seconds: 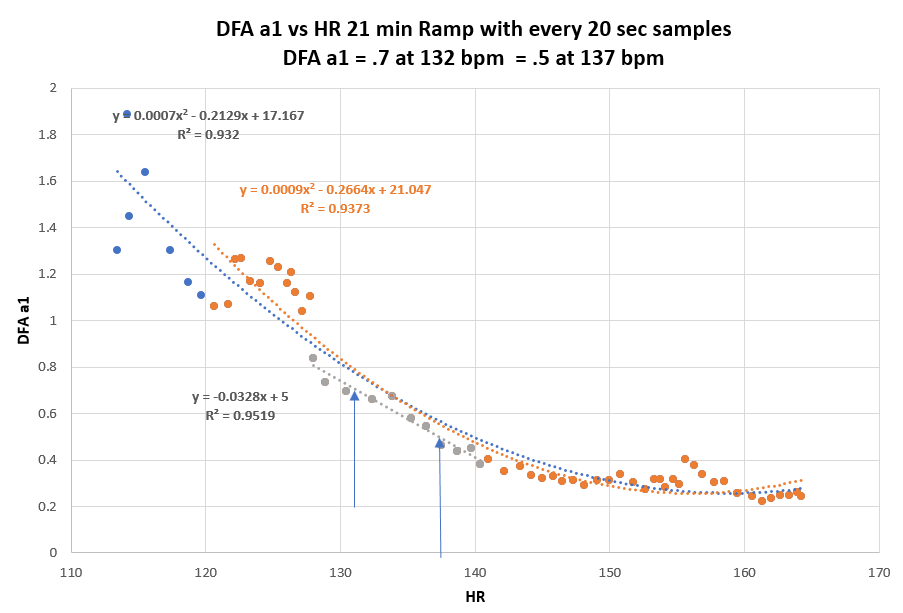 How are we going to compare DFA a1 to power?

Step one - plot power over time: 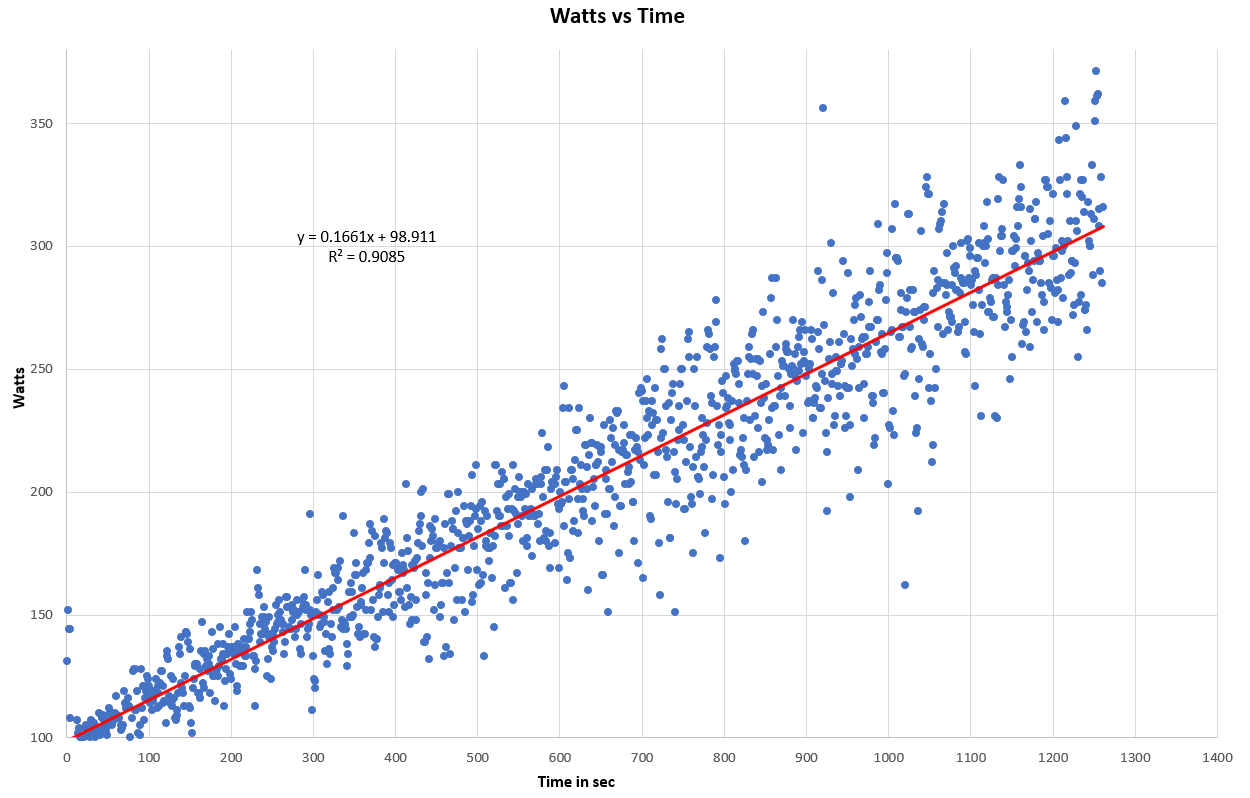 Step two - Then use the regression equation to calculate what each watt figure is at each time interval on the DFA a1 curve: 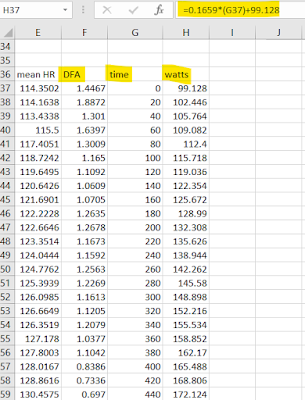 Giving us the following: 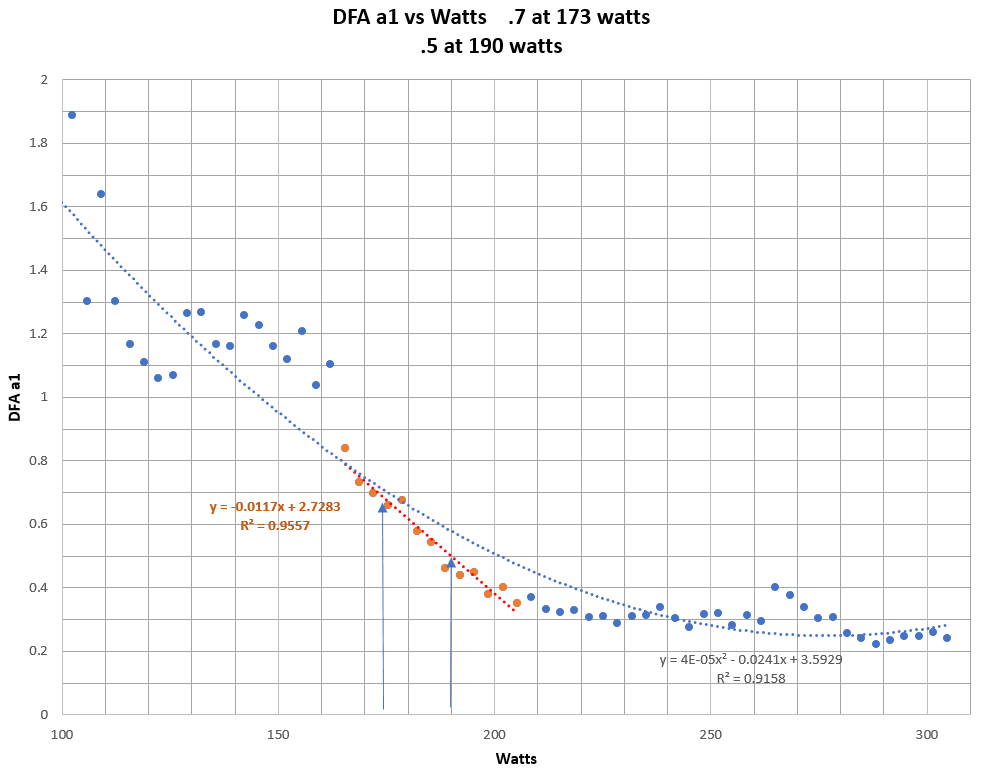 We have many more points and several different choices for plotting regression.


Issue of Reproducibility?
Advantages of not continuing past moderate power:

In academic testing situations as well as for athletic guidance, this process may need to be repeated on a regular basis.  Doing a long ramp to failure is not going to fit into a polarized training model nor is something most athletes have time for.  However, based on curve shape there are alternatives.
As noted above, at intensities past 200 watts, the curve is relatively flat.  Therefore, to minimize physical stress from repeatedly taking the test and avoiding unwanted time in zone 2, perhaps a restricted range ramp can work as well.  In addition, using an even lower ramp incremental rise may be helpful (5 watt per min instead of 10 watt per min).  The 2 minute window of measurement will still be used but recalculated every 20 seconds as a running data point.


In view of these thoughts, I decided to try an even slower rise through the mid portion - 5 watts per minute which translates to - 130 watts to 230 watts over 20 minutes.
There were two sessions, separated by a few days.  Conditions were identical as the constant power tests above. Blue arrows refer to the point on the regression line of reaching a DFA a1 of .7 and .5: 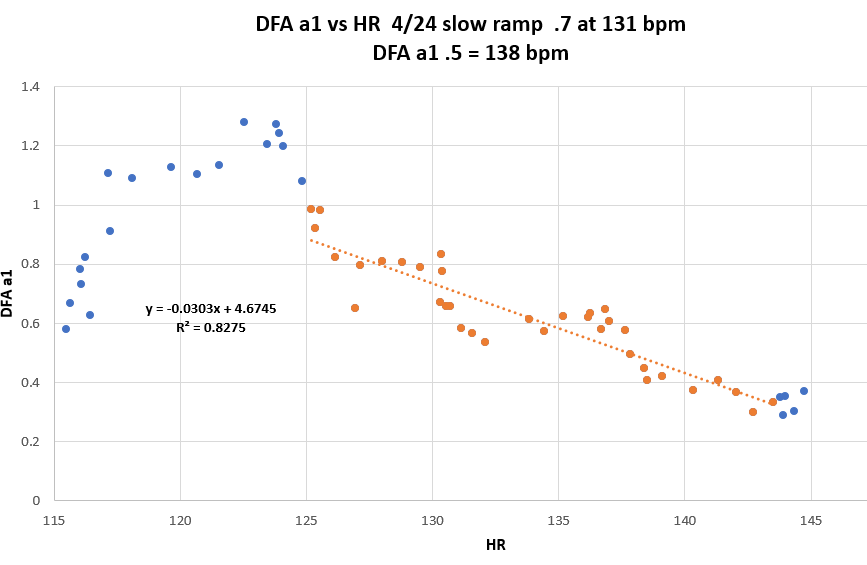 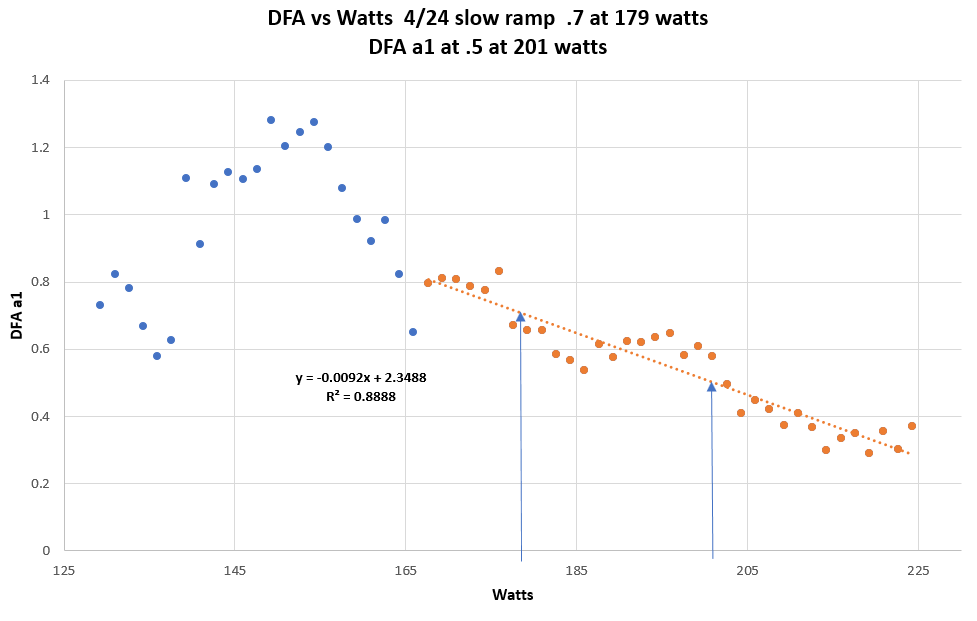 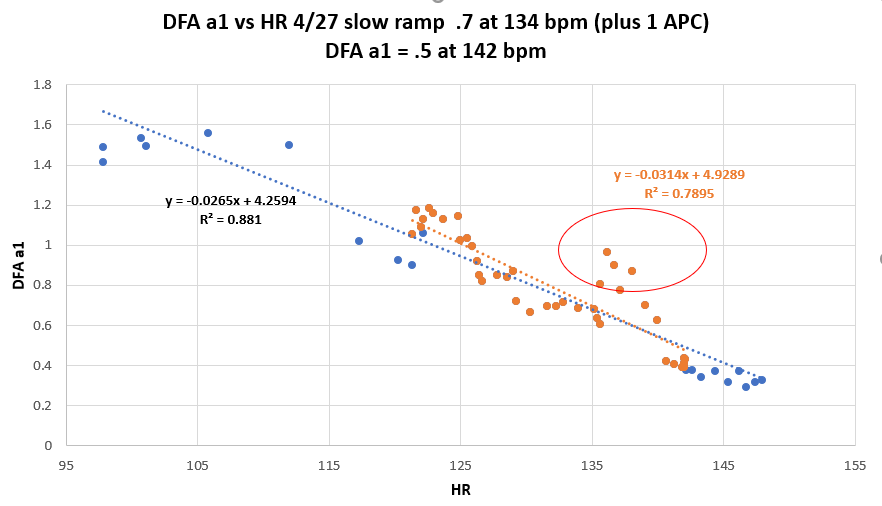 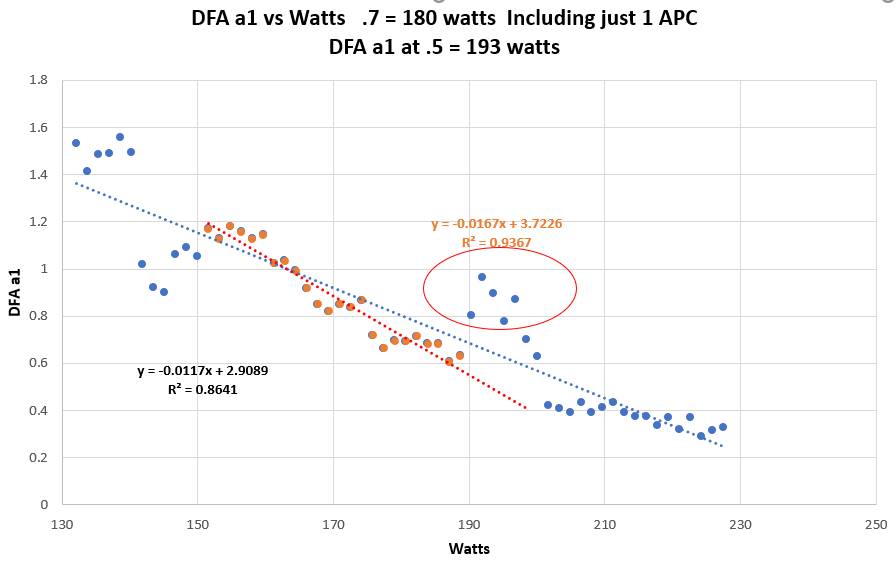 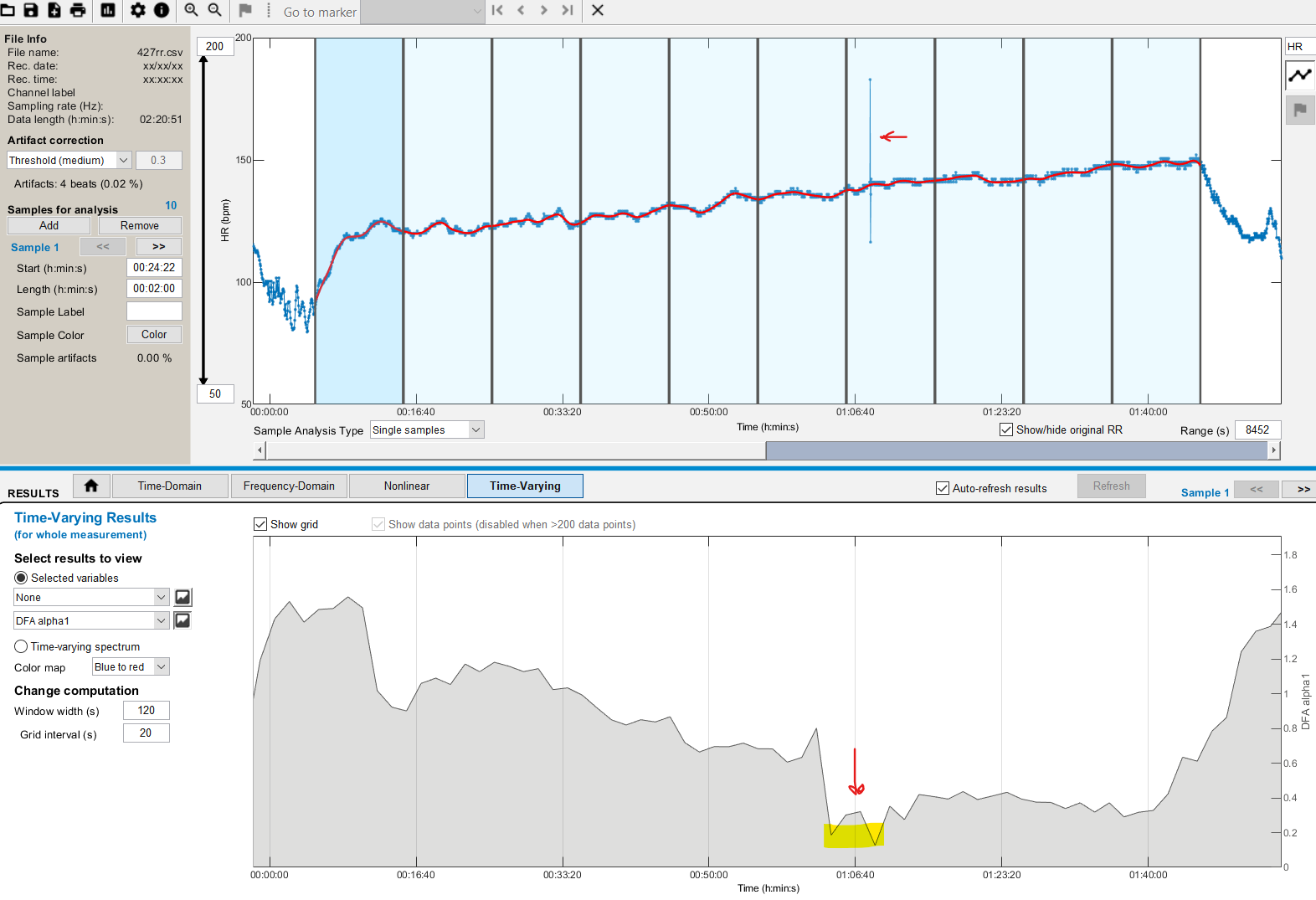 Summary of both constant power and both types of ramps: