This post will attempt to kill two birds with one stone - a look at how a reasonable quality running ramp can be used to denote a "heart rate variability threshold" as well as the issues with heart rate/ECG recording device sample rates.

As part of our exploration into DFA a1 behavior during an exercise ramp, let's look at some recent data that may help some potential users.  Although limited data exists on DFA a1 decline during running vs cycling, in my prior experience they seem to be similar.  A friend decided to do some testing, using the Movesense ECG module worn concurrently with a Polar H10.  He was kind to share the data and the analysis is below.

Here is the protocol he followed:

5 min walking at around 100bpm

3 min running at around 130bpm

3 min running at around 150bpm

3 min running at around 170bpm

First, lets look at the ECG waveform. This was recorded at a sample rate of 512Hz using an iPhone and the Movesense showcase app (should be in the app store). 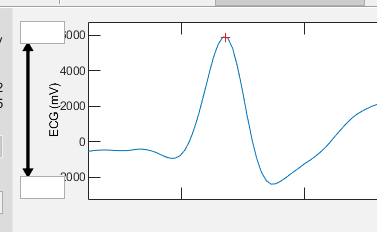 A plot of DFA a1 and HR over time for each device.  This is a time varying extraction from Kubios (window width 2 min, grid interval 5 sec - in other words the DFA a1 and HR are calculated from a 2 minute measurement window and recalculated every 5 seconds).

If we look at the "agreement" between the ECG and the Polar belt, they are pretty good but not perfect.  Below is a Bland Altman analysis of each data pair (looking for proportional bias - more or less bias depending on the DFA a1): 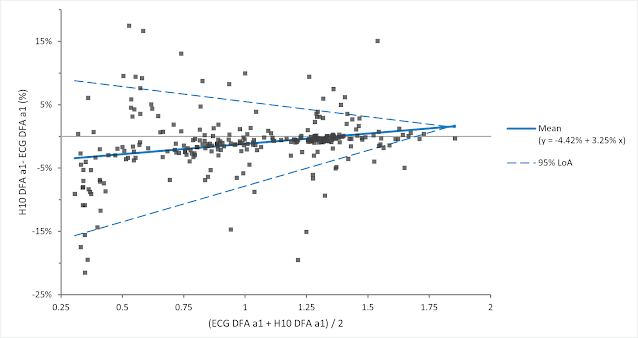 It appears that the agreement is pretty good as long as DFA a1 is above .5, which works well for us since we use values between .5 and 1 to calculate the "heart rate variability threshold" (HRVT, which we feel is a surrogate for VT1 or the aerobic threshold).  However, there is a difference at DFA a1 values below .5 as seen on the t testing below:

Now for the "HRVT" calculation.  To do this we graph the DFA a1 vs the HR, look for the linear portion of the decline, create an equation and back-solve it for HR (see previous posts): 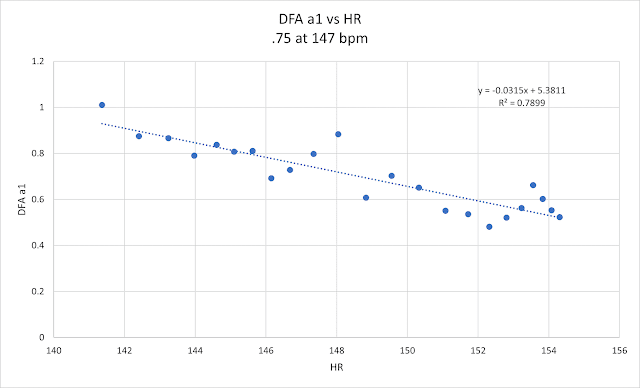 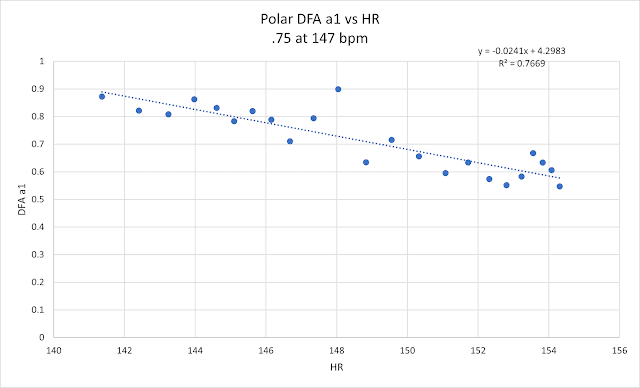 Can we get similar results with Kubios free version?

The premium version of Kubios allows one to get the time varying data graphs.  However, we can come close to this in the free version.  In this case, you will need to manually create 2 minute windows and overlap them to get enough data points.  Here is an example using the exact file as above: 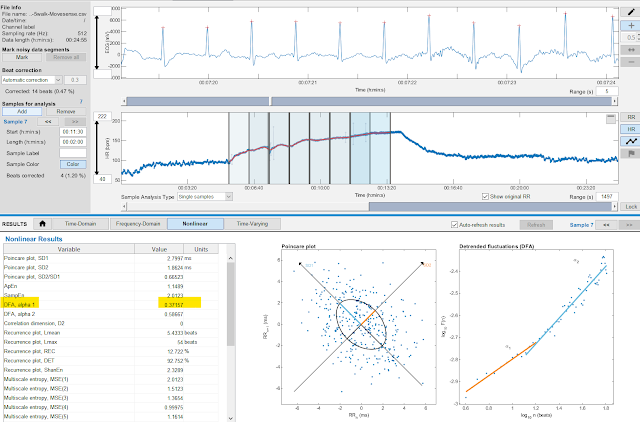 The overlap windows are in the top panel, the DFA a1 values will appear in the panel below it (in yellow).  I copied the numbers down by hand (on the left side) and put them into Excel to graph:

The issue of sample rates:

Although the Polar H10 uses a sample rate that is quite high (1000 Hz), can we get by with lower rates?  I have shown some data using the Movesense ECG at 250 Hz that appears very close to the Polar but what about at even lower rates.  Can a sample rate of 125 Hz give us reasonable results?  This will be of interest when the Movesense unit becomes more widely available since only some devices can handle rates above a 250 Hz bluetooth transmission speed.

The test - my typical cycling ramp (130 to 230 watts over 20 min using Zwift as the trainer power control), Movesense ECG on upper chest (<1% artifact), Polar H10 in usual location under the pectorals (artifact below 4%).

Loss of R peak definition noted!  The true R peak could be buried in that flat top portion. 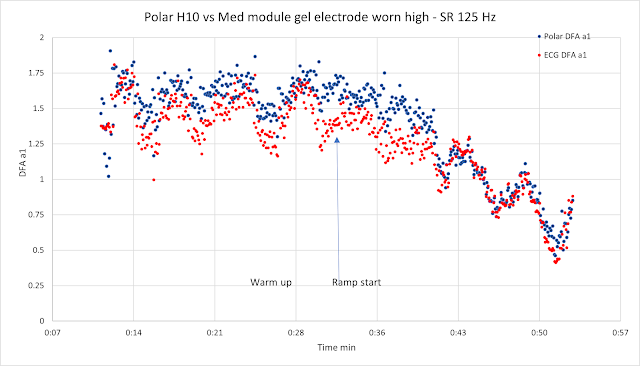 During the warmup, the low sample rate ECG may be reading lower, however, the ramp appears much closer: 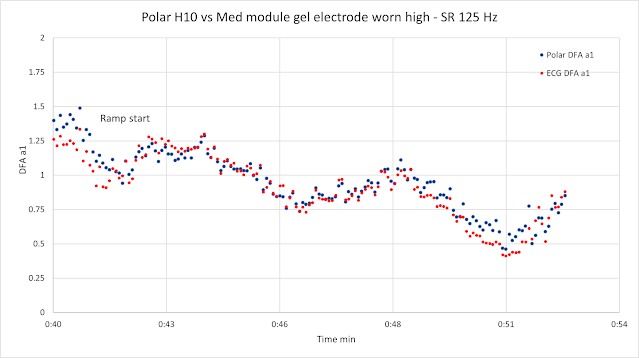 What about the HRVT portion (used to calculate the VT1 surrogate): 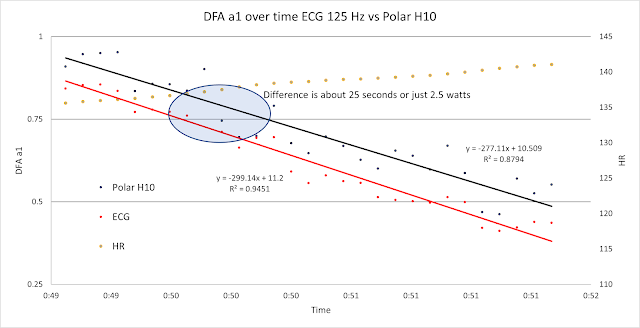 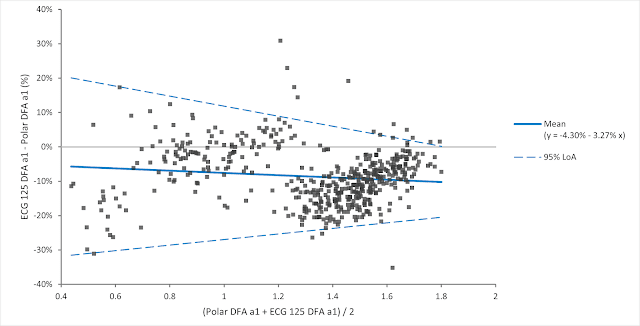 How can we explain lower DFA a1 values related to both low sample rates as well as waveform deformity?

Not long ago, a colleague of mine presented a very clever study. 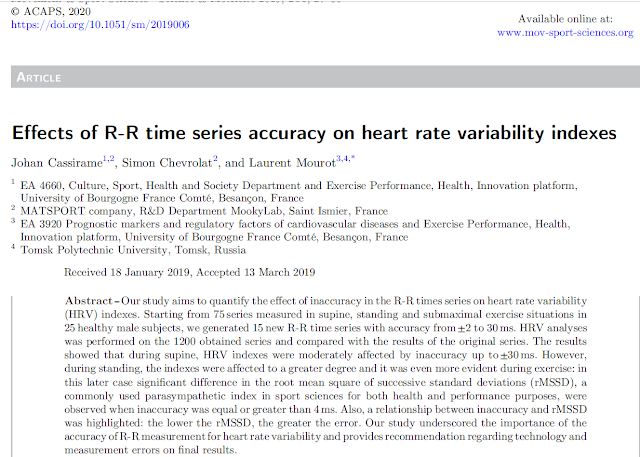 The aim was to see what happened to various HRV indexes if there was loss of RR precision.  In other words, would the HRV index change if the R peaks were not precise.  That's going to happen in either low sample rate conditions or with waveform distortion (see older posts).  Their data showed downward bias in the DFA a1 during light exercise (intensity below VT1 with DFA a1 baseline about 1).  The bias was not as severe with a resting RR tracing.  I suspect that with DFA a1 values near .5, the bias would be even worse than noted.

What does this mean on a practical basis?  It appears that inaccurate assessment of the R peak by either ECG distortion/low sample rate or by a conventional chest belt can impact the precision of the DFA a1 measurement.  This is not something that can be necessarily corrected by software since it's essentially based upon the loss of information.  For example, a blurry photo can't be corrected by Photoshop (ask any good photographer).  DFA a1 is based on fractal correlation properties of the RR times series.  As in a detailed map of a coastline, loss of the map's dot to dot precision will change the fractal nature of that given coastline.  Since we are at the very beginning of really understanding the specific use case prerequisites in having one achieve a valid HRVT, further work needs to be done to address these issues.  One scenario is clear, use of optical based RR data should not be deemed trustworthy until proved otherwise.