DFA a1 problems during running - why?

I have previously noted DFA a1 decline associated with poor Movesense ECG waveform and have had multiple "complaints" of DFA a1 reading too low at easy intensity levels during certain forms of exercise in certain people.  The most common example being running. The scenario is usually as follows :

"My DFA a1 drops while running at trivial effort, way below what it should be and much different than with similar heart rates when biking."

My guess was that some type of core/trunk/diaphragm electro mechanical interaction was distorting the ECG waveform, making the peak of the R wave less able to be measured precisely. Since DFA a1 is an index of correlation properties and fractal patterns, a loss of true R peak timing will result in an artificial reduction in the complexity of these patterns.  Kind of like a dirty fingerprint on your camera lens - a loss of detail occurs and the picture is not going to be sharp. But perhaps the answer is from a different type of interference.

Why would running give us a distorted R peak?  Here is a clever and informative view of  chest wall motion during running:

As you can see there is quite a bit of motion and sensor bounce going on.  Whether this is part of the issue is unclear, but it does make one wonder.  In addition, the volume is rapidly changing, which could lead to variation in the ECG signal.

The question is what happens if we reduce the "pounding"?  Would the DFA a1 measurement normalize to where it should?

Thanks to a blog reader who kindly did some tests, we have some confirmation that this might be true.

He did a series of intensity ramps under three conditions, all using the same HRM (H10)

What I have done is simply plotted the heart rate and DFA a1 over the course of the intensity ranges.  Normally, if your DFA a1 is in a .75 range cycling at a HR of 150 for example, we would expect similar behavior while running with the same HR. 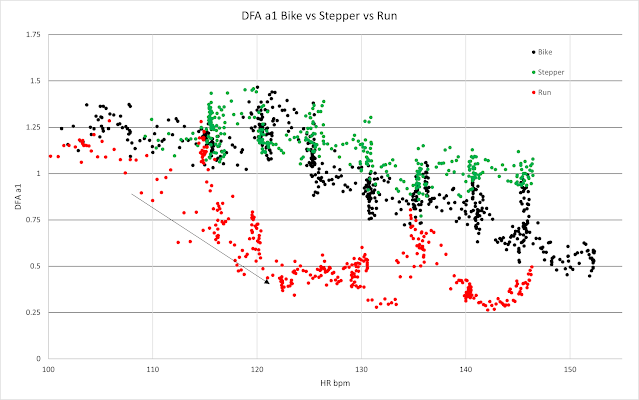 His HRVT on the bike: 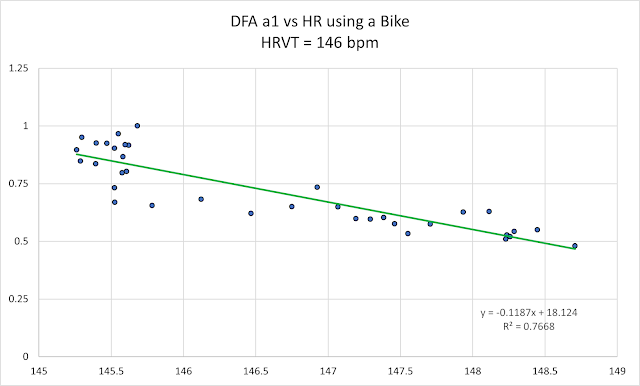