One of the most promising modalities to improve performance of a short time trial or equivilant is the fast start strategy (FS).  In a previous post this was reviewed but precise heart rate and respiratory data were missing on my end (no Hexoskin).  I thought it may be interesting to repeat some of the various permutations with accurate HR, ventilation as well as costal/leg SmO2 measurements.  The excellent study above discusses potential mechanisms of why this protocol may cause performance gains.  I will try to look at similar themes as well as some additional observations.  Finally, the "cost/benefit" of employing this type of power pattern is briefly reviewed.

To start with, I would like to briefly explain a few physiologic parameters of interest.

VO2:
This is simply the amount of oxygen the tissue is utilizing.  VO2 max would be the maximum O2 usage attainable.
The classic definition is derived from the Fick equation:
VO2 = Q × (CaO2 − CvO2)
Q is the cardiac output which is (heart rate x stroke volume).  The stroke volume is the amount of blood pumped per beat.  As exercise intensity rises, the stroke volume rises, but plateaus well below the max heart rate.  At high work rates, we can assume stroke volume as a relative constant (technically it could even drop at very high HR from inadequate atrial filling).  That would mean cardiac output (at high work loads) is very proportional to heart rate.

(CaO2 − CvO2)
This refers to the difference in arterial and venous O2 content.  Although not a direct measurement of such, the NIRS O2 saturation is related to this somewhat, discussed next.

Locomotor muscle O2 saturation
Both oxygen delivery and consumption are able to affect the measurement of SmO2.  The balance between delivery increase (vasodilitation) and higher consumption (motor activity) may yield a variety of final results.  The net balance between the delivery and consumption is reflected as the amount of extraction.  For example if the delivery stays constant, a higher consumption (exercise) will cause a larger O2 desaturation (and a higher net extraction).  On the other hand, a decrease in delivery (heart failure) with stable consumption can lead to higher extraction and lower measured tissue O2 as well.  Both conditions lead to higher extraction though different mechanisms.

Ventilation:
It has been shown that at moderate exercise intensities both HR and ventilation are related to the VO2.  Certainly at work rates above the MLSS, ventilation will be boosted from acidosis compensation.   This is a figure from a study looking at this relationship. 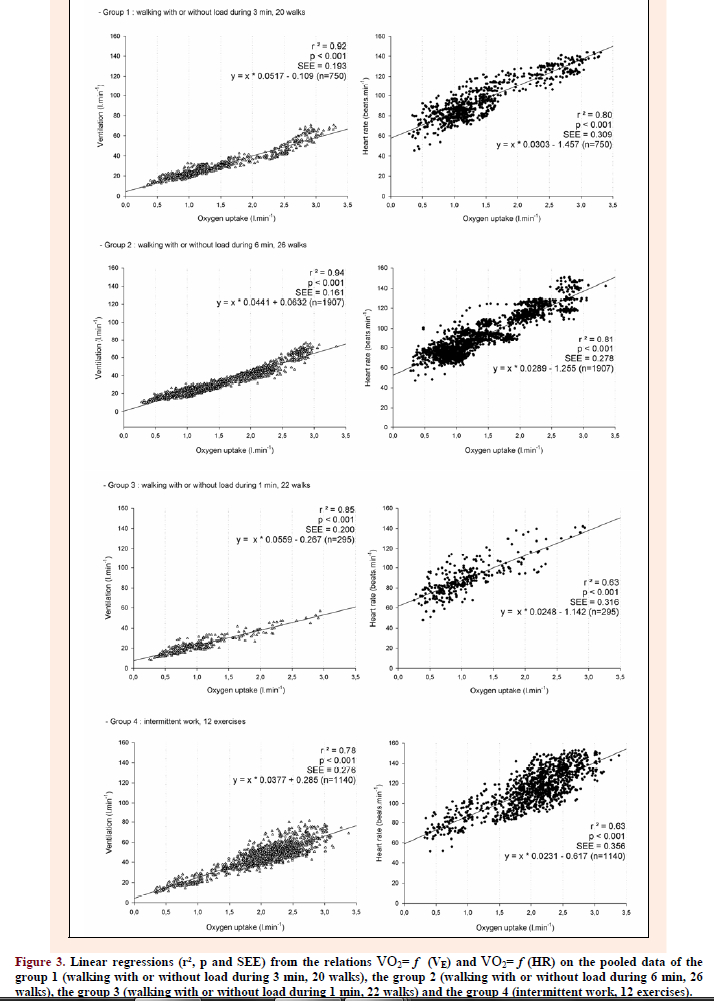 The end result is that looking at the early ventilation rise in either Fast or Slow starts may be a reflection of VO2 on kinetics.

Does tHb indicate blood flow?
Although it is tempting to use this as a measure of flow, it just does not work out.
There are some sophisticated methods to estimate flow (without cuff occlusion), but the simple tHb tracing can be misleading.
From the quoted paper:
Handgrip exercise: 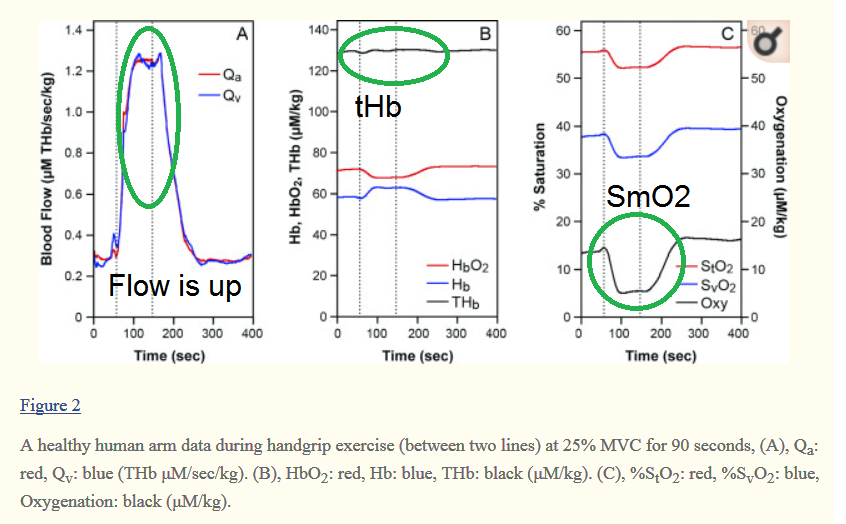 With exercise the flow is up (L panel), SmO2 is down (R panel) but tHb is flat.  This would be the general situation in most of our tracings, except for the consequence of external compressive forces. 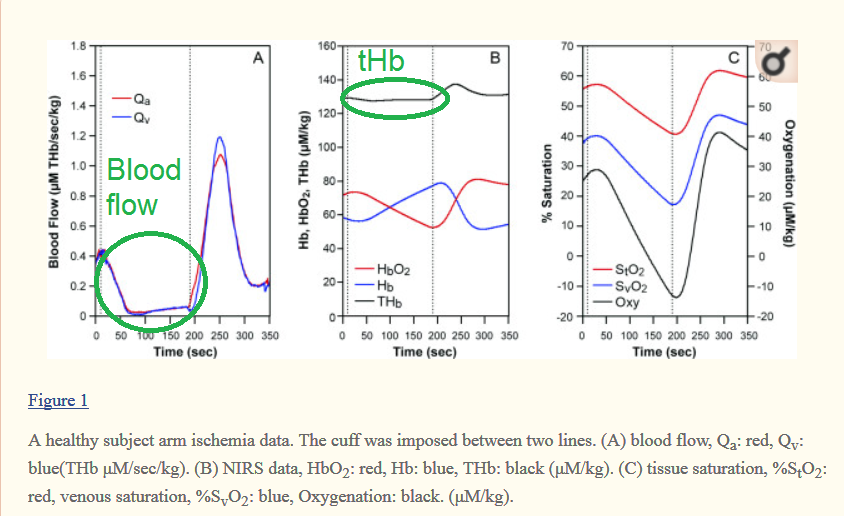 The tHb is relatively flat in cuff occlusion, but does show a tiny rise with cuff release and compensatory hyperemia.  The cuff is not surrounding the area of measurement so no compressive effects are seen.

Given the above background, several physiologic differences will be looked at in the Fast vs Slow start routines.

When I initially saw this my first thought was that although the O2 extraction was theoretically higher in the Fast start, perhaps it was simply related to higher levels of muscle contraction force (from the high power of the FS) causing external compression (and reduced flow/supply).
For instance the following is a total Hb tracing of the latissimus muscle during a heavy load pulldown.  The prompt reduction in tHb (blue down arrow) is the start of muscle contraction and the blue arrow up is the end of the exercise set.

Does this occur during the Fast or Slow starts?
Here is the Slow start VL tHb (in purple):

And the Fast start VL tHb (in purple):

Nearly identical!
There does not appear to be a compressive blood volume reduction.
Therefore it does appear that the O2 extraction is faster and more complete in the initial part of the Fast start interval unrelated to external compressive flow restriction.


Does the RF have a similar pattern?
Here is the Slow start RF O2 tracing:

Is the tHb pattern different?

This is a graphic of the zoomed out ride (power in gray).  Both tHb patterns look similar (red color). 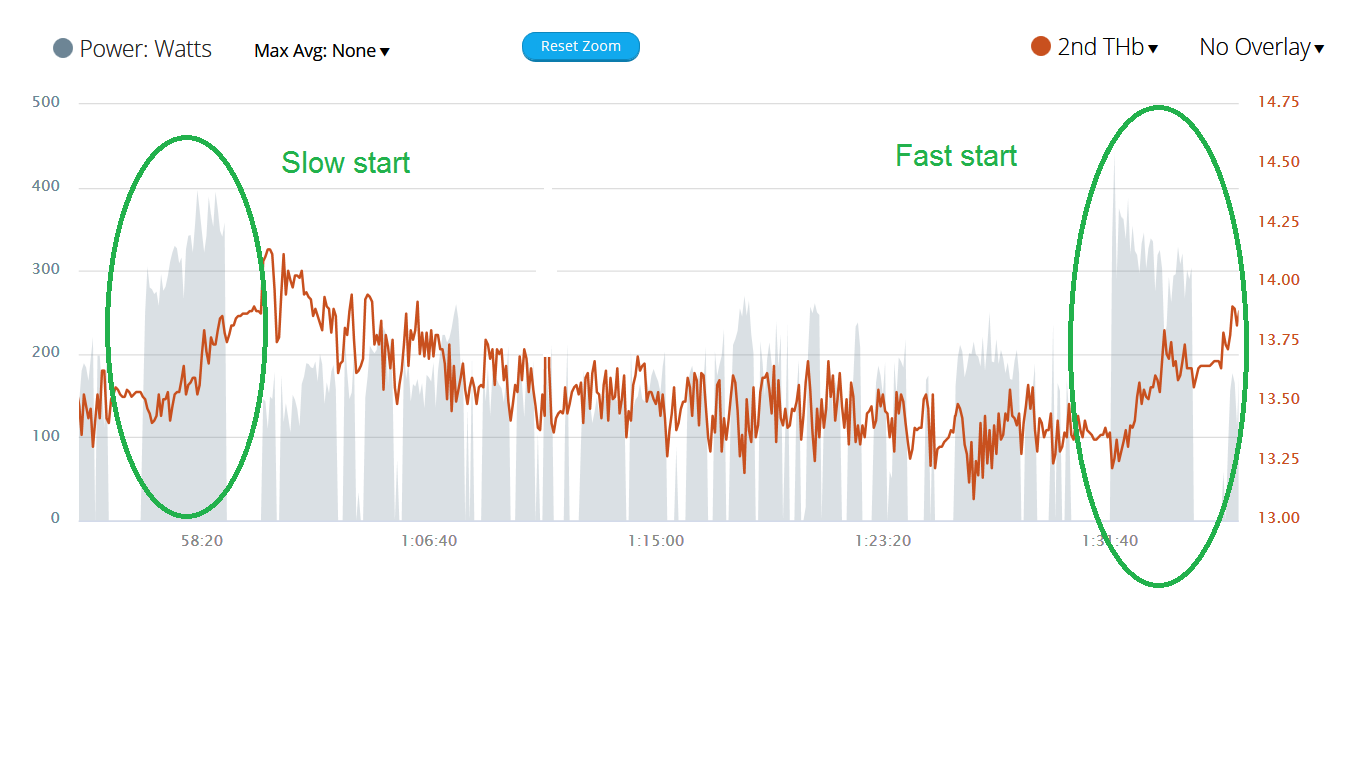 The RF patterns are similar in both intervals, as in the VL monitor tracings.

Respiratory parameters:
The Hexoskin shirt has been shown to give accurate measurements of breathing rate, index of minute ventilation (when not calibrated to the individual) and heart rate.
Is there a difference in any of these parameters? 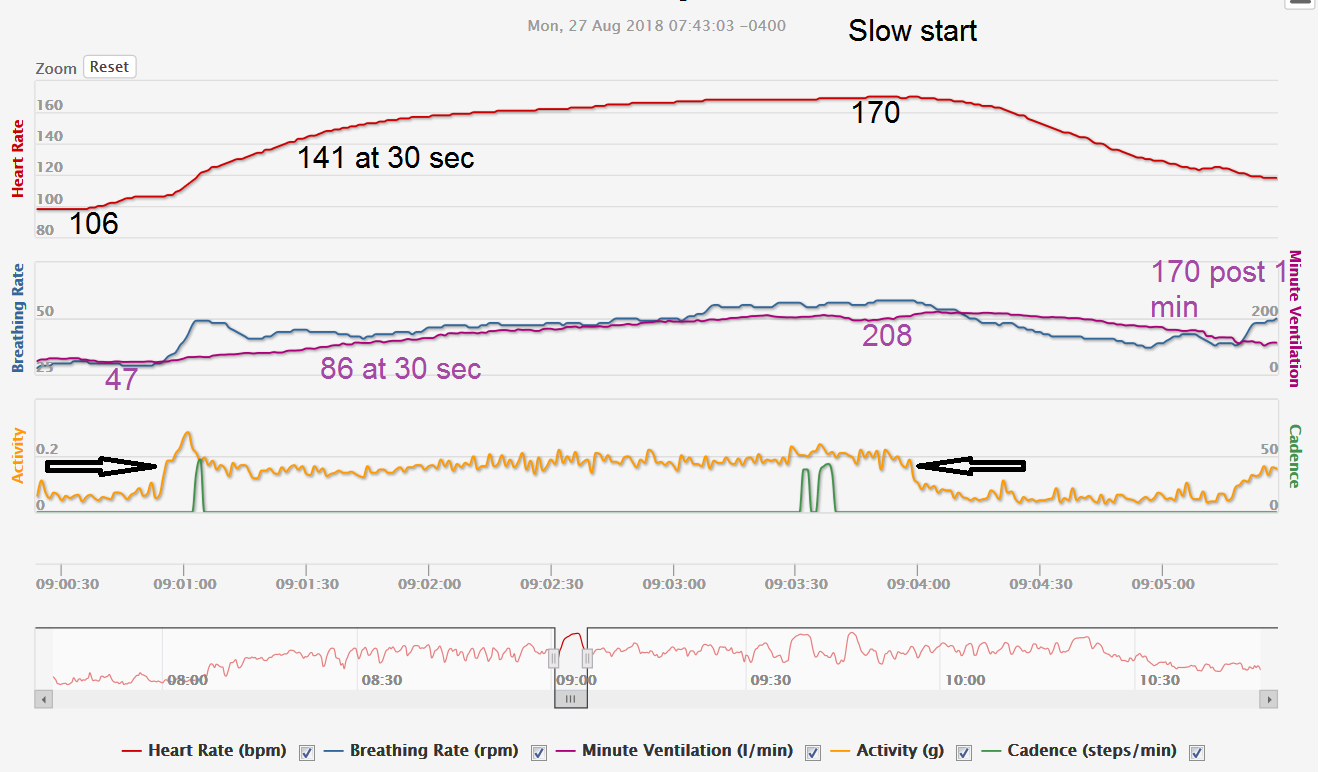 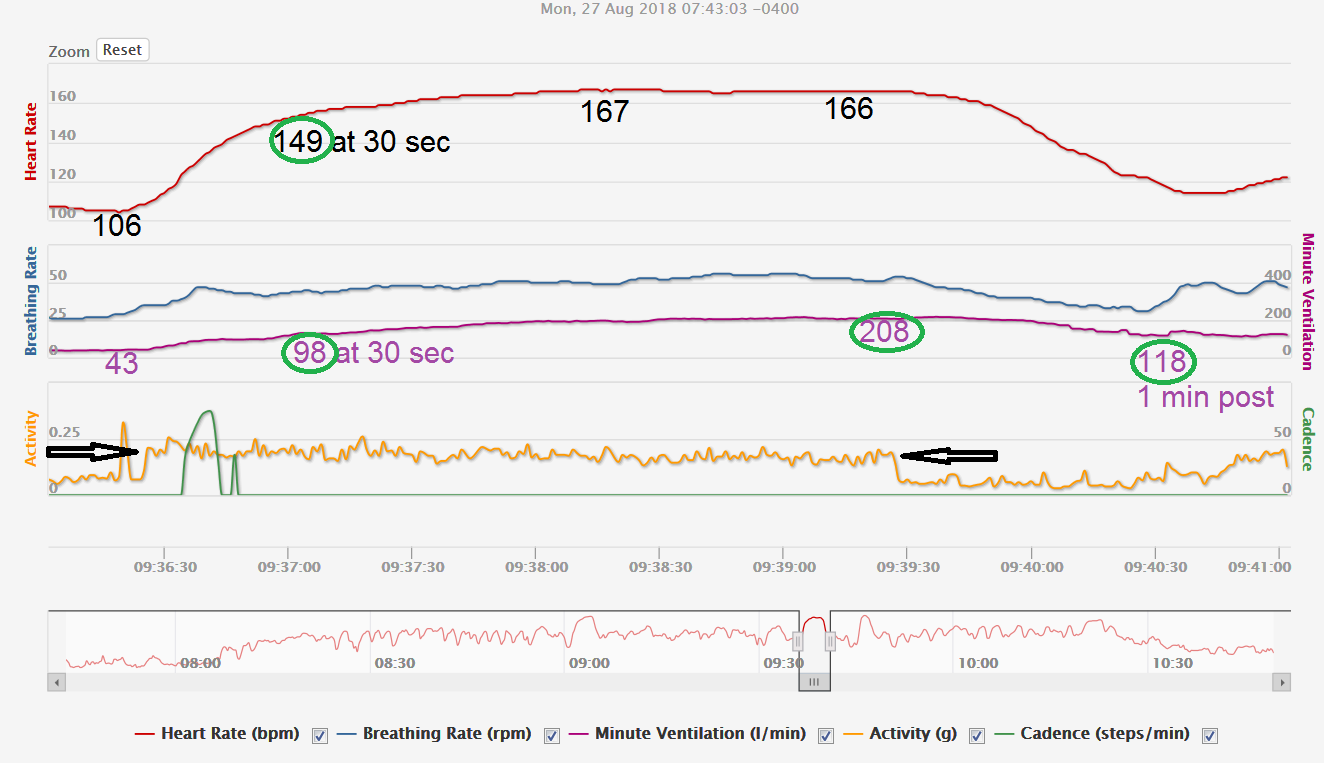 There appears to be several differences between intervals

What about average heart rate?
Unfortunately, this was not easily obtainable given the problems in parsing the Hexoskin data (I did not record it as usual on Ipbike - see last post) but it was approximately 4 BPM higher in the Fast start.

For a better look, here are two intervals (on different days) with solid average HR data:

A look at costal O2 dynamics.
The costal O2 potentially reflects both cardiac output redistribution effects, as well as increased respiratory muscle work rates (higher O2 usage by those muscles) from ventilation rise (normal O2 needs as well as lactate buffering).  This paper was reviewed awhile back but is an important theme for the data below. 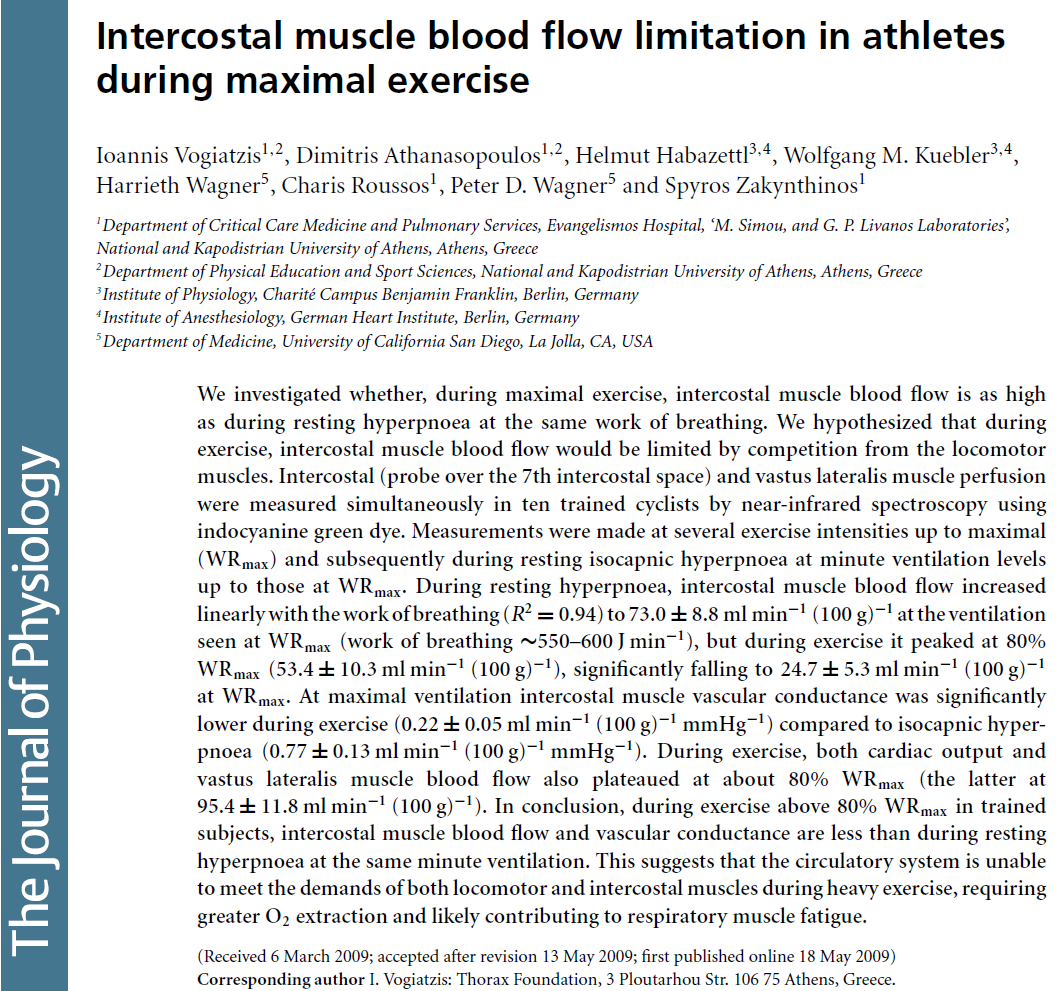 A look at longer intervals:

Given the observation that both HR, ventilation volume and presumably VO2 on kinetics are improved with the initial FS pace, does starting a longer interval this way adversely impact the remainder.  For instance, in a hypothetical race, are we worse off with starting with a 30 second effort at a higher power before dialing back to about MLSS vs just keeping at the MLSS from the start?  Does that initial 30 sec power burst "cost" us later, or does it create the optimal exercise physiology environment for the upcoming interval?

The best Hexoskin equipped intervals that I have to compare are as follows (not perfectly matched):
This is a 7 min Even start at 251 watts:

And the respiratory data: 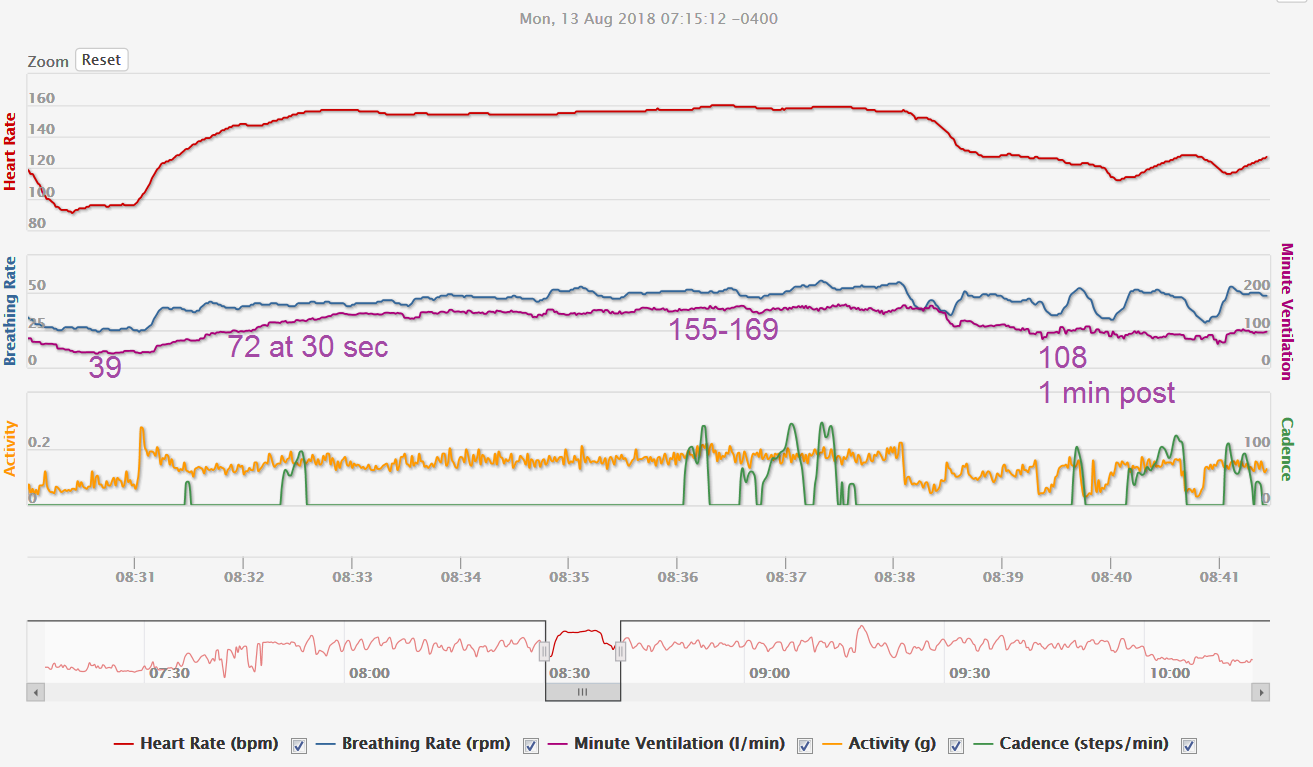 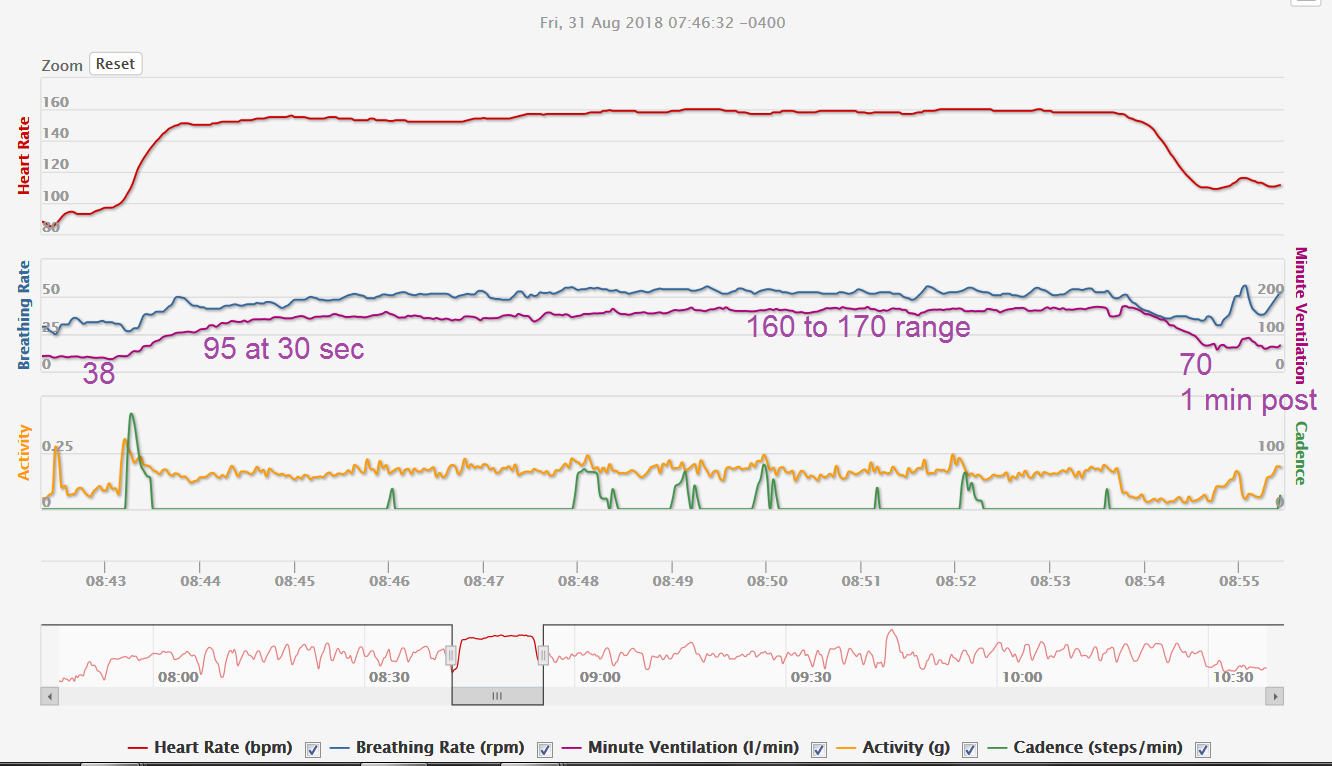 Some final thoughts (open to corrections)

Is there better locomotor muscle O2 extraction in either condition?
Is there a difference in cardiac output as reflected by heart rates (assuming constant stroke volume)?
Is there a difference in early ventilation increase (as a potential indirect look at VO2)
Is the end interval ventilation rate different?
Is the post interval ventilation recovery faster in FS?
Re examination of the costal O2 desaturation pattern in view of now having ventilation data.
Can a Fast start segment prime the "system" resulting in faster recovery than otherwise seen with an Even pace?
How much does a Fast start cost us (fatigue, end ventilation/HR elevation)?


As an end comment, these observations were done on one person, older than the usual test subject, and genetically more of a strength than endurance athlete.  Whether or not younger, more elite endurance folks would show this pattern is unknown.  However, with relatively simple gear, these same test intervals could be done by anyone to see if they would benefit from a Fast start strategy.