What are some reported mechanisms of RMT that lead to improving endurance performance?
A word on the "metobo-reflex"
Early studies have shown that manipulating the work of breathing by loading/unloading the respiratory system can reduce blood flow to the leg.
Here is a figure from the paper above where inspiratory resistive loads were placed on subjects.  With a higher load, blood flow to the legs was reduced, with negative loads, blood flow was improved:

In addition this study was reviewed in my early post on respiratory muscle O2 monitoring.
Summing this up, in the competition for blood flow and O2 supply, the respiratory system components usually win.

Since we can't ride around connected to a CPAP machine or ventilator assist device, can training the respiratory system somehow achieve something comparable?
I think we can....

The claims of RMT sound almost too good to be true, but the data is out there.   However, a certain frequency and quality of training is needed to reach and maintain the improvements.  In addition, there are different types of training devices that provide different varieties of physiologic challenges and choosing the correct device is important.
An excellent study compared the EMG activity of the multiple muscles involved with 3 different devices.

Looking at the devices (descriptions from the paper):

Voluntary isocapnic hyperpnea
VIH was conducted using SpiroTiger M 1.4 (idiag AG, Fehraltorf,
Switzerland). The set up was individualized according to the manufacturers
recommendations: bag volume according to 50% of vital capacity;
minute volume was set as 60% of MVV; target tidal volume was
set as bag volume × 1.2; target breathing frequency was set as minute
volume · target tidal volume−1. Two exemplary bouts of VIH lasting
1 min with a 30 s break in between were applied

Inspiratory flow resistive loading
IFRL was conducted using RespiFit in the endurance mode setting
(Biegler, Mauerbach, Austria). The set up was individualized according
to the manufacturers recommendations: tidal volume was assessed
while breathing through the device with 14 breath/min for 30 s set at
80% of the individual PImax. Two exemplary bouts of IFRL lasting
1 min with a 30 s break in between were applied.

Inspiratory pressure threshold loading
IPTL was conducted using POWERbreathe (IPTL-PB) (Powerbreathe
Classic, HaB International Ltd, Warwickshire, UK), set at 80% of the
individual PImax based on recommendations for IPTL (Janssens et al.,
2013). Furthermore, a variant of IPTL was conducted using RespiFit in
strength mode with identical settings (IPTL-RF). Target pressure was
assured with a separate pressure transducer (see below). Two bouts of
each 5 inspiratory efforts with a 30 s break in between were applied
with each device.

The results were as follows: 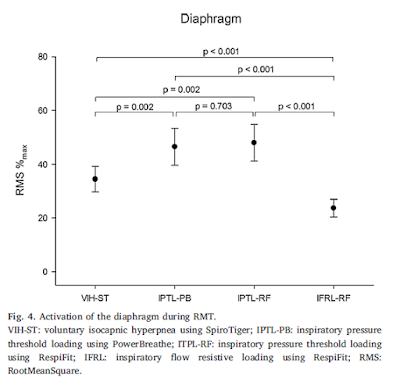 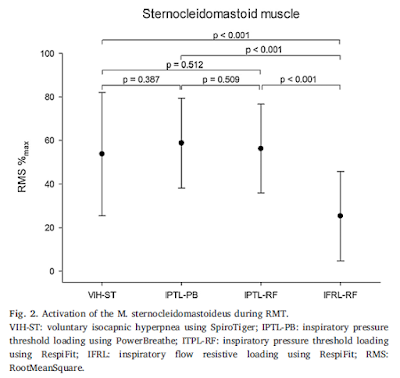 As noted the Powerbreathe (and Respifit in strength mode) lead to the best diaphragmatic activation.  Their conclusion:

From the standpoint of which device to use, the above is helpful, but some further refinement in technique can produce even better diaphragm training.
According to this study, using an abdominal breathing technique, diaphragmatic activation is markedly enhanced.  From the paper:
"Trial 2 was identical to trial 1,
except for the breathing instructions. Participants were
instructed to emphasize the use of their diaphragm and ensure
their abdomen ‘‘sticks out’’ during each inspiratory
maneuver (diaphragmatic inspiratorymuscle training [IMTdi]).
Subjects were familiarized with diaphragmatic breathing by
sitting upright in a chair and placing one hand on the abdomen
and the other hand on the ribs along the anterior
axillary line. Subjects would then breathe and attempt to
keep their hand on the rib stationary and only moving their
abdomen."

And the EMG responses: Whether this translates to better net cycling/running performance has not been shown.

What I use:
I started using the Powerbreathe K4 almost 1 year ago.  Using the manufacturers recommended protocol, the resistance level gradually rose over several weeks and I informally noted better 1 min, 3 min interval times.  However, after about 3 mos, I slacked off due to some cervical spine issues and laziness.  I did pick it back up again at about the same time as I began using the Hexoskin.  I have some interesting observations to discuss and perhaps some tips on usage.

Let's look at what happens to the costal O2 during a 30 breath (about 3.5 minutes) session:

There is a definite per breath ripple and gradual reduction in costal O2.  Interestingly, the dip at the end was after stopping, which is also seen in some of the post interval tracings.
The Total Hb also shows a ripple on each breath potentially showing either a flow change or effect from muscle compression:

Before getting too excited about the training effect related to SmO2, the R RF tracing also shows a per breath spike.  I think this is more from "tensing" the legs during each maximal breathing effort:

But it does not have the post RMT drop in O2 that the costal muscles exhibited.

Sample of Data from the Powerbreathe K4:

One of the perks of this particular model is the ability to look at both per breath dynamics as well as your progress over time.  It was due to this functionality that I stumbled upon the observation that my power/flow readings were much better after a ride than before.  There have been papers discussing the potential benefits of doing RMT while exercising and perhaps this is somewhat related.
For example, here is a 30 breath graphic from before a 3 hour ride: 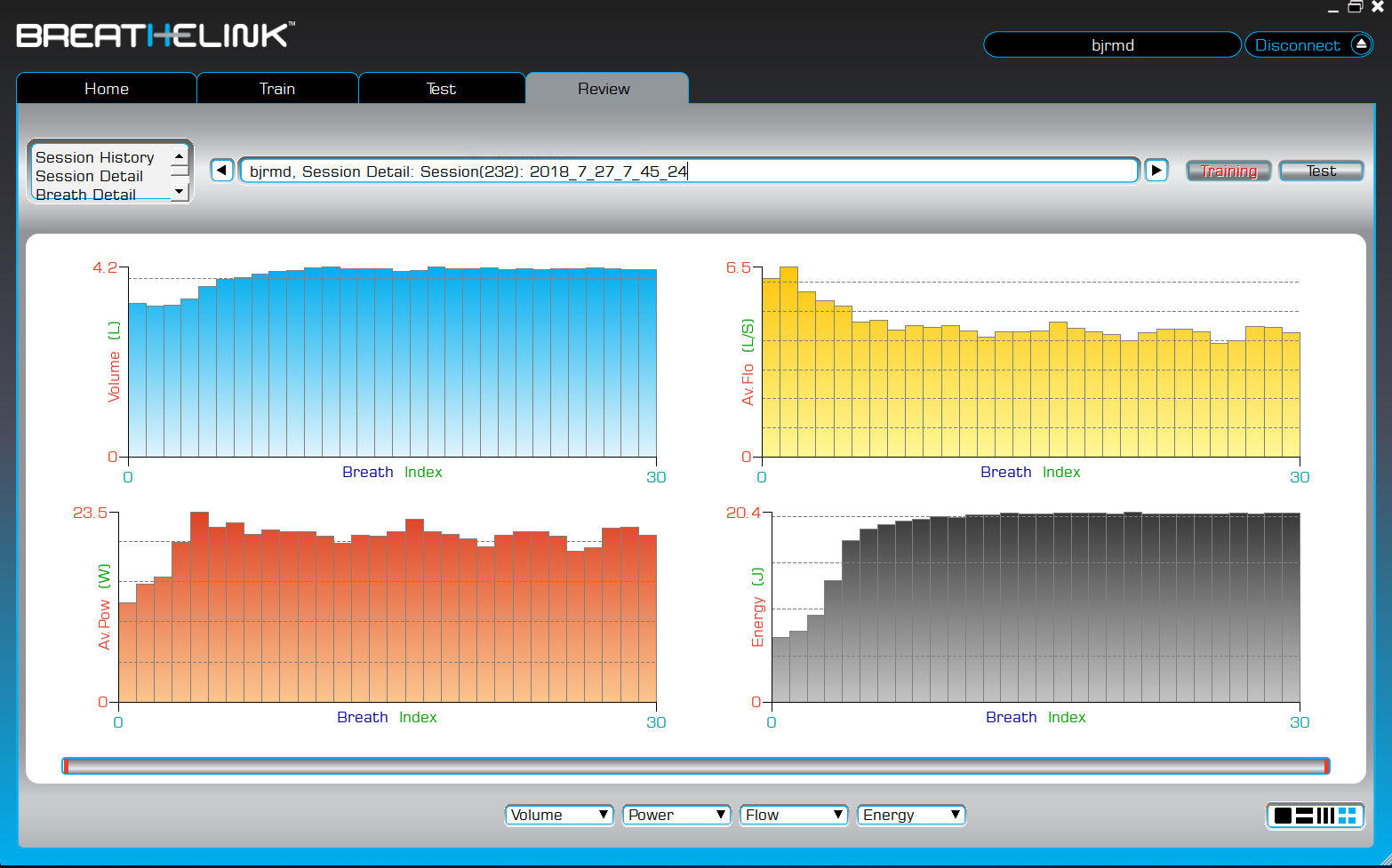 And after riding 3 hrs (with several intense intervals): 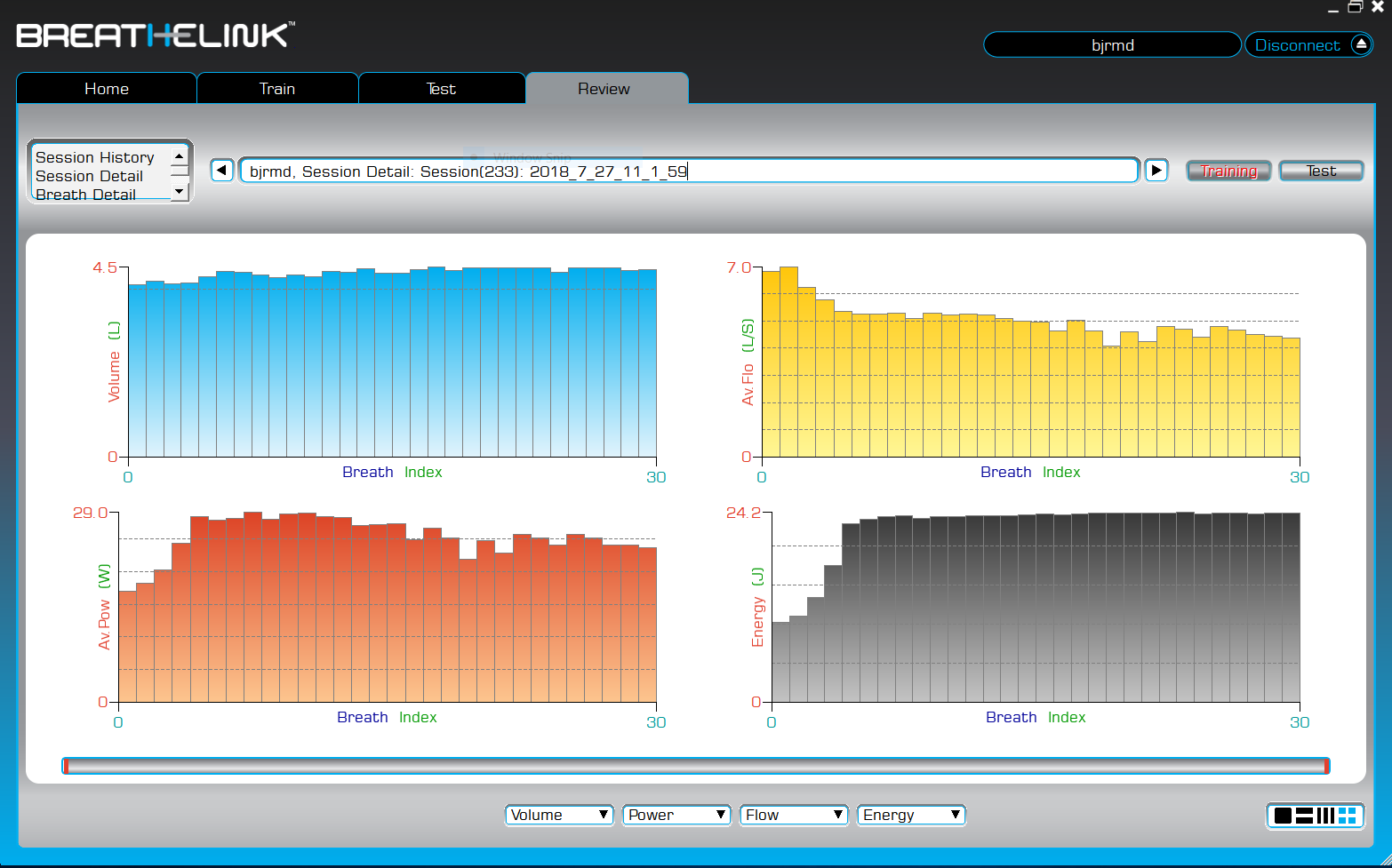 Both volume, power, flow and energy are all much higher when done immediately after the ride (no more than a couple of minutes separating).  I have also noted that delaying by even 30 minutes will largely eliminate this effect.
I would imagine it is superior to do it this way as you will be achieving much better physiologic stimulation of the various training goals.  For example, lifting a heavier load and more often in a weight training session will provide a better stimulus for muscle development.  I have basically stopped doing the RMT randomly and now only use it immediately after a ride, 5 days a week.

Another example of the Powerbreathe data analysis is the breath by breath analysis: 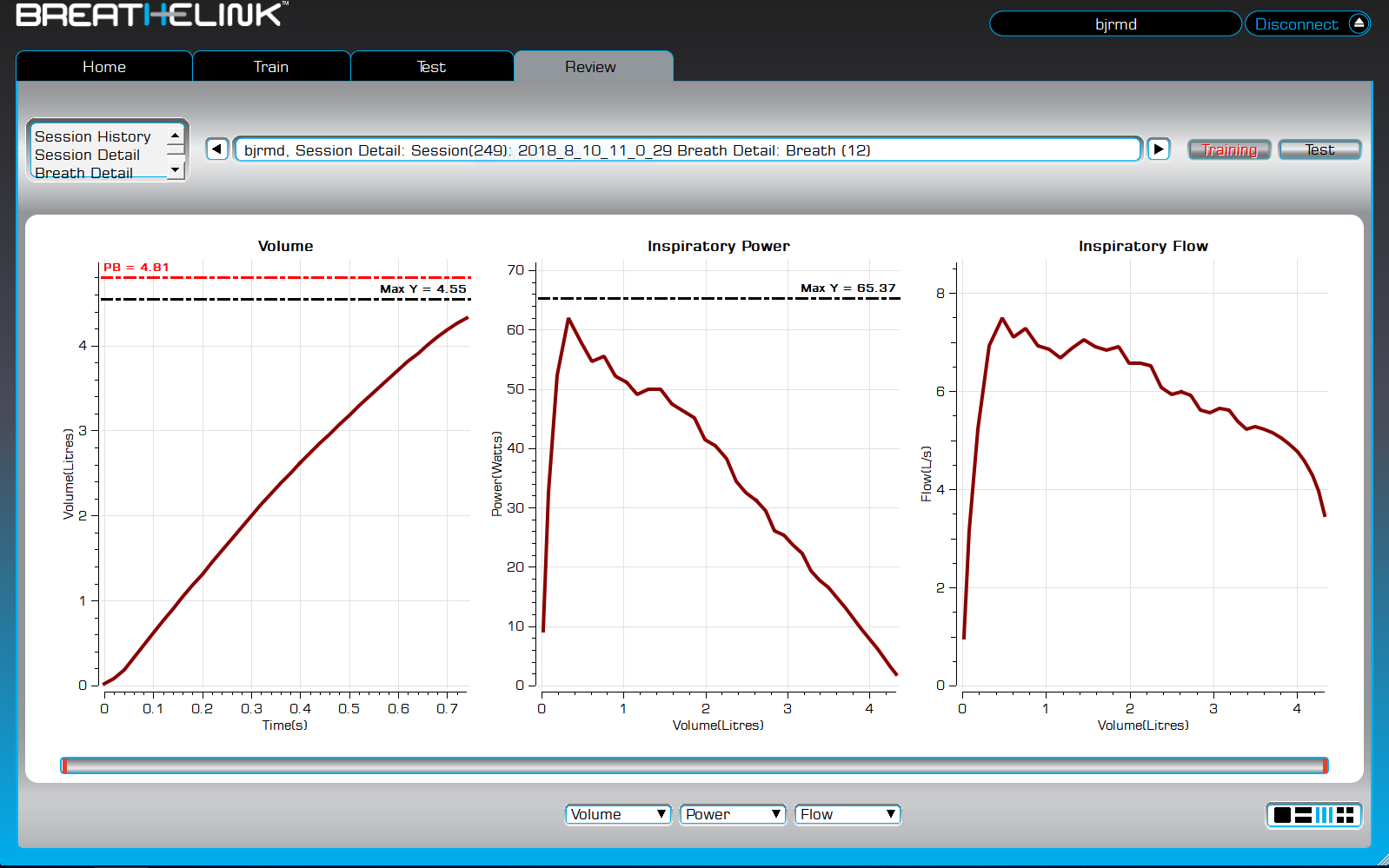 Each parameter is graphed over time giving clues on improvements in flow, volume and power.

Back to the pre/post ride comparisons

Initial raw thoracic and abdominal breathing:
First tracing is before a 3 hour ride and represents one breath in the middle of the 30 breath session, purple is thoracic and blue is the diaphragmatic estimation using the Hexoskin. 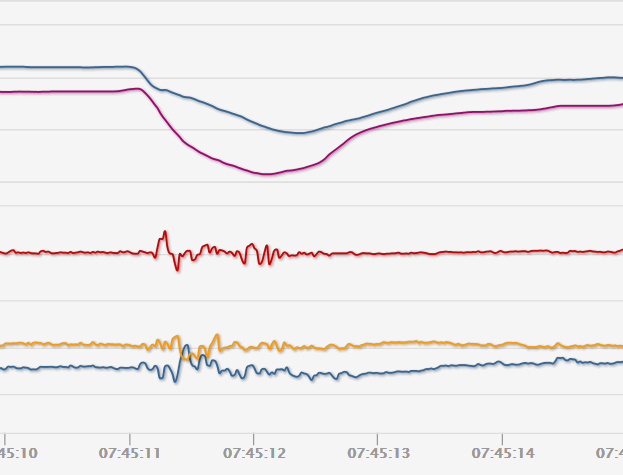 Next is the same raw view after the 3 hour ride (one breath):

The other breaths are basically the same and show much better motion, especially for the abdominal component after the ride.
The difference in the blue tracing is striking and indicates better net diaphragmatic breathing motion if training immediately post ride.


It's great that the Powerbreathe resistance numbers improve with training but does that actually translate to one's personal muscular improvement?  For instance, do we get better diaphragmatic strength or excursion?  I looked at the Hexoskin raw data from the end of first week of use (1 week into usage was the first post ride data), to present (about 3-4 weeks)
.
After 3 weeks of RMT the one breath curve (post ride) looks like this:

On first look, I wasn't sure there was much difference.  However, the time scale is about the same and the diaphragm motion pattern seems deeper in the first few seconds.
Whether this represents a training effect is unclear.  The curve shape in both pre and post RMT were the consistent over the 30 breaths.
Bottom line- possible improvement in diaphragmatic excursion during post ride training and net improvement as well over 3 weeks.

Here is my first 1 minute max interval done with the Hexoskin that was near the beginning of Powerbreathe training: 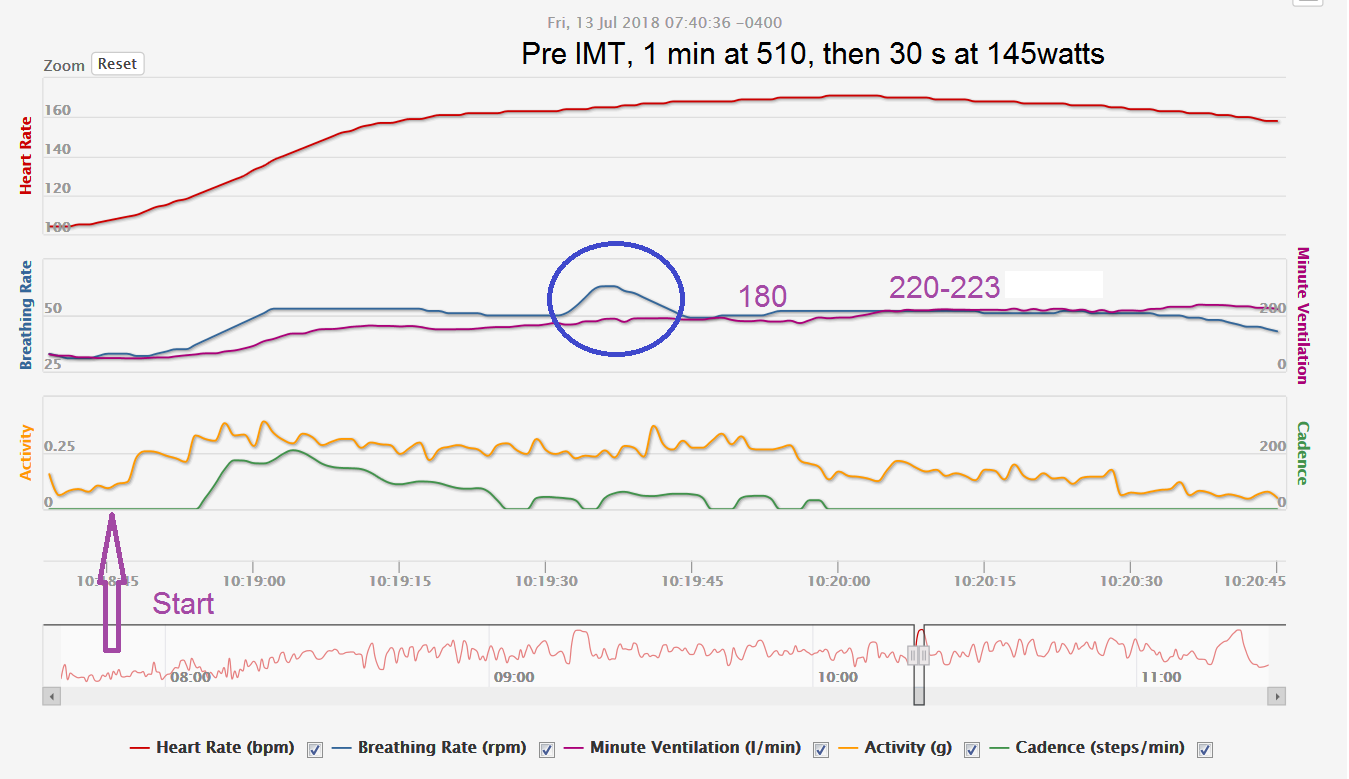 I circled a spike in respiratory rate that corresponded to a time of very severe breathlessness, but not a higher ventilation volume-more on that below.

The BSX sensor is on my L which is it's new usual location (because of the Hexoskin shirt dongle placement on the R). No late spike in rate of breathing.  Steady rise in minute ventilation.

Finally to pull the concepts together we have this excellent paper: 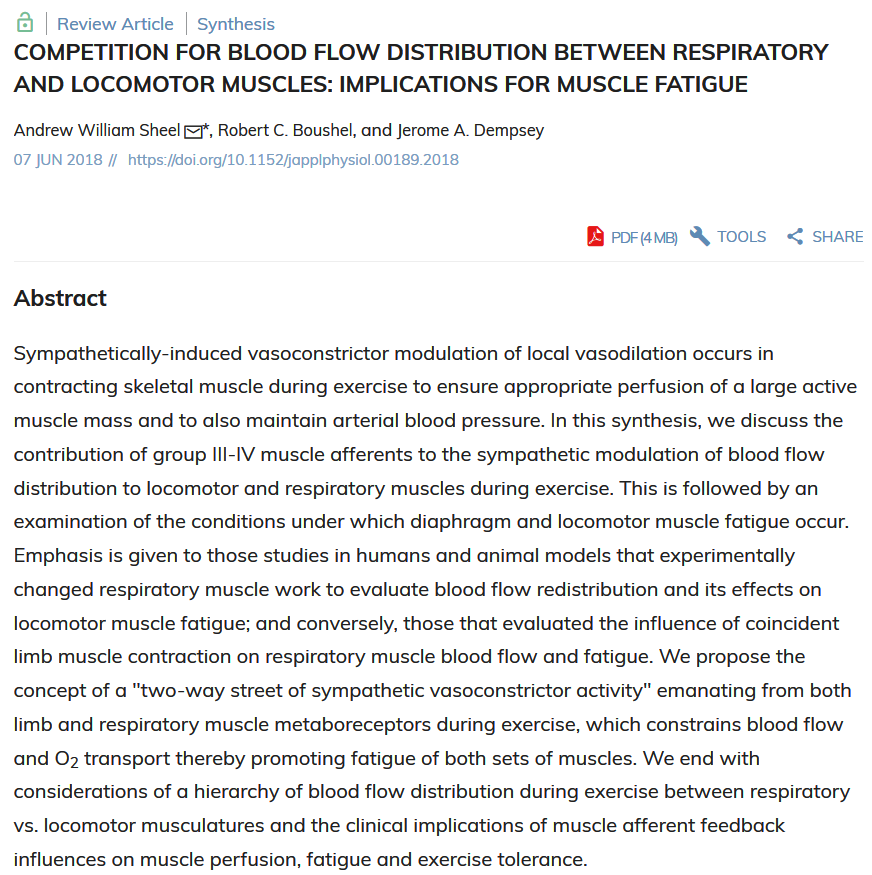 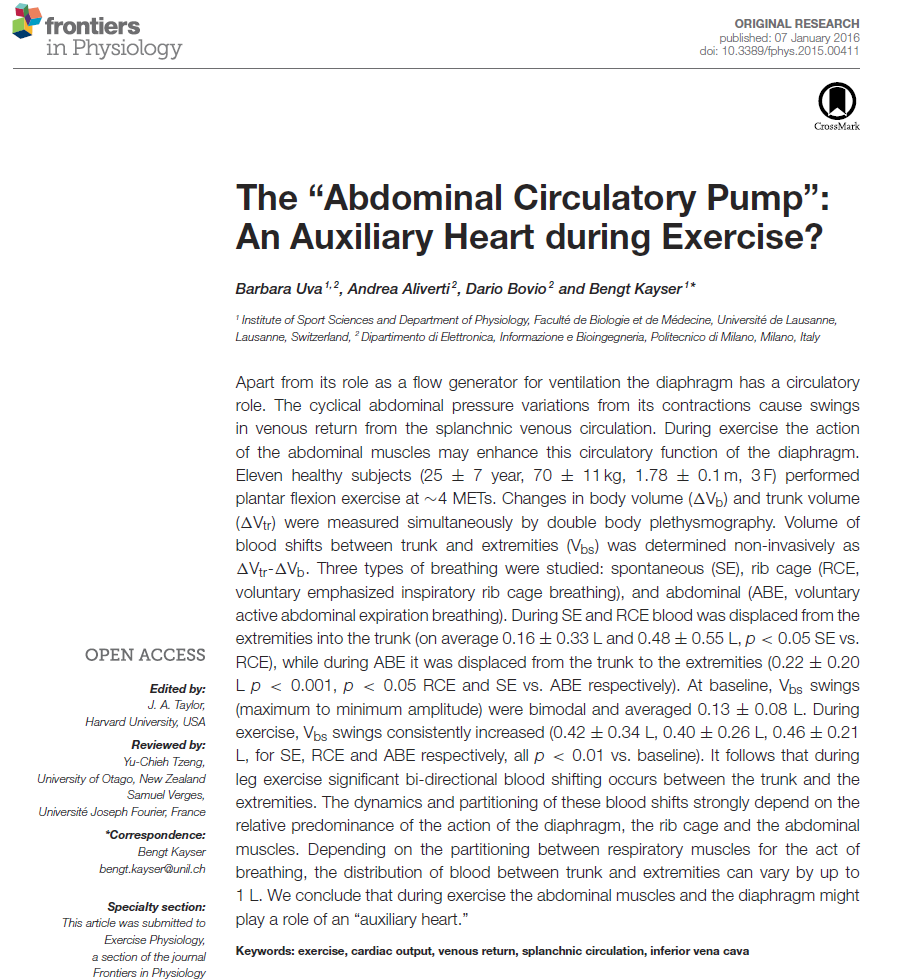 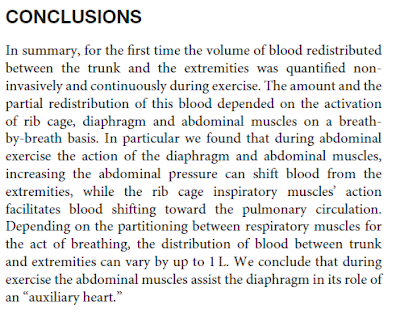