O2 desaturation and MLSS - Gone but not forgotten?

Although I have not covered much in the way of muscle O2 desaturation literature recently, a recent article caught my eye and I wanted to share it.  The usage of muscle O2 saturation observation during ramps to determine the RCP/MLSS/VT2 is not new (see below).  Unfortunately, with both BSX and Humon sensors unavailable/unsupported, the only game in town is Moxy.  Despite the potential benefits (which have been covered), their price point is just way too high for me to recommend.  However, if you already have a unit, lets look at this new study.

We tested the hypothesis that local muscle O2 saturation (%SmO2) from the exercising and non-exercising muscle describes the mismatch between O2 supply and utilization during whole body exercise, where %SmO2 progressively decreases when exercising above but not below CP, thus exposing sustainable from unsustainable work rates.

In other words, at a constant, steady state intensity, a declining SmO2 indicates work above the critical power (another intensity boundary term similar in magnitude to the AnT, RCP, MLSS, VT2, LT2 etc.).

To test the general hypotheses that %SmO2 distinguishes sustainable from unsustainable work rate and predicts time to exhaustion, two independent experimental protocols were performed. Each subject participated in one of the two protocols.

On day 1, subjects performed a graded exercise test to exhaustion on the cycle ergometer, where work rate increased by 1 Watt every 2 seconds in a continuous ramp protocol. Gas exchange threshold (GET) and maximal oxygen uptake (VO2max) determined for each subject established the domain specific power requirements for future exercise trial days. Moderate domain constant work rate exercise intensity was established as 90% of GET.  To establish exercise intensity for the trials in the heavy and severe domains, we calculated a relative difference (%Δ) between power output at GET and the power output at VO2max for each subject. Exercise at 35%Δ defined the heavy domain constant work rate trial and exercise at 65%Δ between power output at GET and VO2max specified the severe domain constant work rate trial [10, 30]. Traditional criteria verified the severe domain work rate, including a VO2 slow component and the presence of a VO2max that was not different to that seen in a ramp protocol

We can see that they used various estimates to designate intensity domain test conditions.  I wish they would not have done it this way.  IMO, just a 5-10 minute series of intervals just below, at and above the second threshold would have been easier to understand and be of more practical benefit. 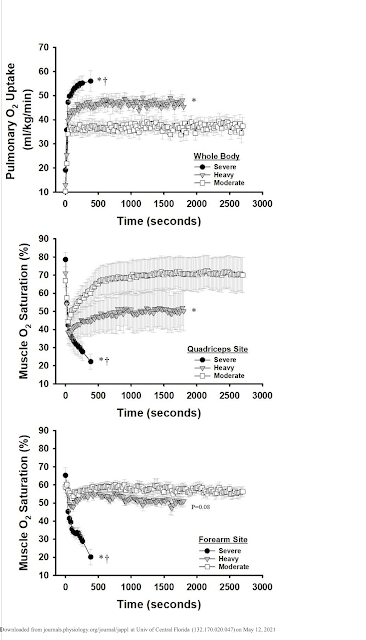 Results show notable drop in the SmO2 in the severe intensity domain at both sites.

However, they did do some "time trials"  in a running test:

Prior to all tests, subjects performed 3 minutes of walking after which the subject abruptly ran up to the intended target speed within 2-3 seconds. Treadmill speed was manually controlled by the runner, where a large screen displayed current and target speed.  When the subject could no longer maintain within 0.5mph of the target speed during the constant velocity test (described below) despite verbal encouragement, trials were ceased. All exercise trials were performed until exhaustion was indicated by the volunteer or the prescribed exercise work rate could no longer be maintained.        The 6 study visits began first with 3 continuous exercise time trial days followed by 3 intermittent exercise time trial days (Figure 1B).  The study days were as follows:
Continuous exercise trial days 1-3
1.    5-min (5min TT) or 15-min (15min TT) time trial effort for maximum distance
2.    5min TT or 15min TT time trial effort for maximum distance (opposite of visit 1) 3. Constant work rate (CWR) for maximum distance (estimated at 10 minutes to exhaustion, described below). 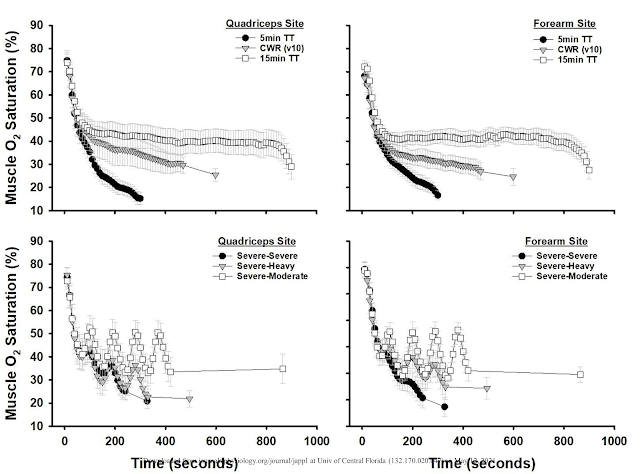 The present data suggest that %SmO2, and its derivatives, can be leveraged to differentiate sustainable from unsustainable exercise intensity, describe and predict the depletion and repletion of the finite work capacity above CP (i.e. W´), and accurately predict the time to exhaustion. Our findings are consistent with the idea that the balance between local muscle O2 supply and metabolic O2 demand provides a useful physiological surrogate of critical metabolic rate and W´ balance.  Combined, these data extend current understanding of factors contributing to the maximal steady state metabolic rate and, importantly, provide a useful approach to describe and predict human exercise limitations

All in all a nice study (Nike Inc was one of the co authors).