Case studies (check back for updates)

This is a quick and dirty look at a ramp done from data sent to me by a reader. I have no info except this:

I do have a fit file with power data and the HRV logger with RR. The artifacts were well below 5%. I did two plots - HR vs DFA a1 and DFA a1/Power over time.

Let's see how they look: 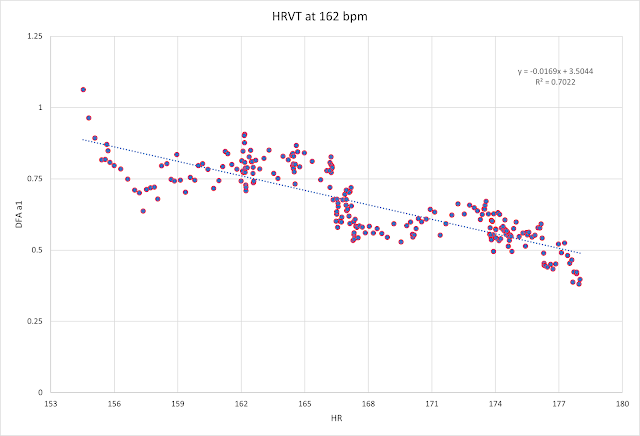 Power calculation can be more difficult - here we need to get the power on the same graph. I did that by synchronizing the timestamps. Then did regression lines for the entire power data, but a regression only for the marked DFA a1: 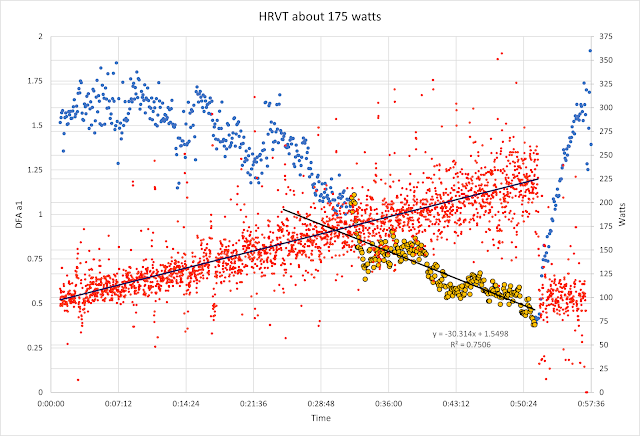 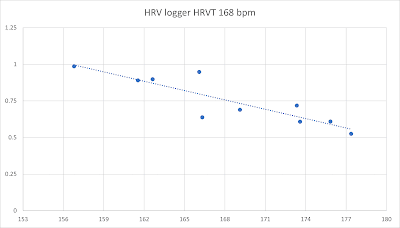 Case #2 (5/23/21):
This is a data set done with a Polar H10, HRV logger recording and lactate measurements.  I show this as a good example of how even lactate readings can be confusing and don't necessarily help as much as one thinks.  Also we will see that HRV logger a1 values are quite close to Kubios.
The ramp - cycling with steps of 25 watts every 5 minutes with lactate values at the step end. 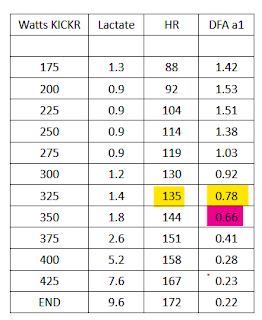 What we see here is that a1 passed the .75 boundary just above a HR of 135 bpm, by inspecting the numbers.  Although this is every 5 min data, if we were using HRV logger, real time, we would have a solid guess that between a HR of 135 -144, we are passing the AeT.
How does HRV logger do compared to Kubios.  Since I don't have the pre processed RR intervals, I compared the Logger a1 (already artifact cleaned) to the Kubios a1 directly (no artifact correction in Kubios). 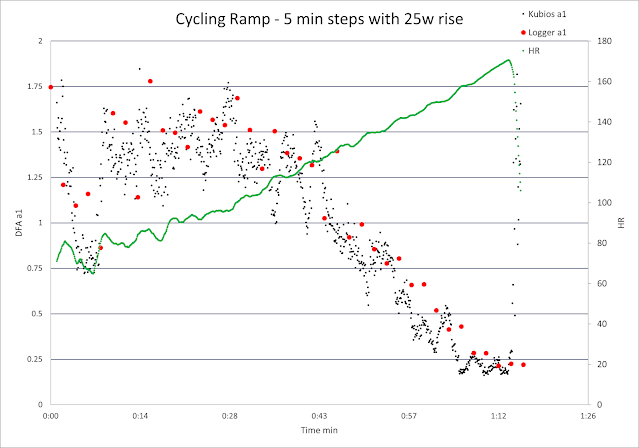 HRVT HR
Here are the graphs of HR vs a1 with two ways of doing so - a short vs longer data plot: 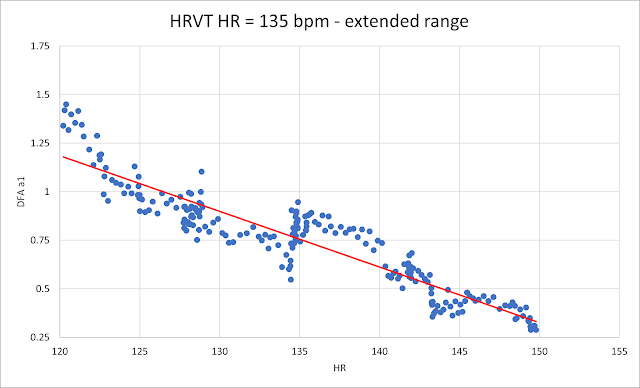 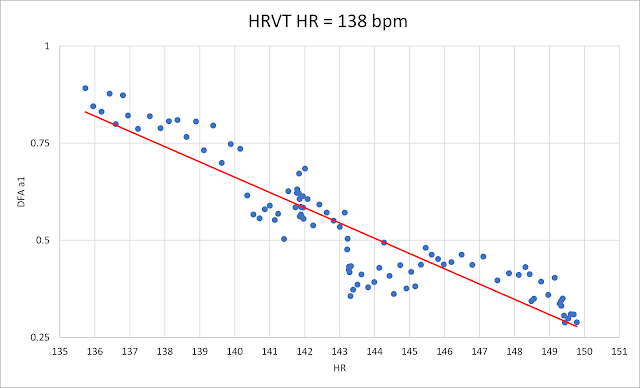 What about lactate and the LT1
Here we get into the real conundrum - what threshold do we use - loglog, first linear change, 1 mmol rise etc.  I plugged the numbers into the Newell template in R and this is what we have: 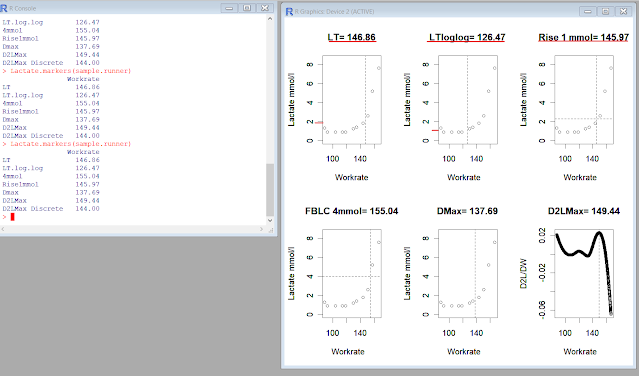 From the Newell article:

Traditionally, the lactate threshold was determined
subjectively from plots of the lactate concentration
versus work rate by visually identifying the treadmill
velocity or work rate that best corresponds to a
departure from a linear baseline pattern. Lundberg,
Hughson, Weisiger, Jones, and Swanson (1986)
proposed fitting a linear spline where the lactate
threshold is the estimated work rate corresponding to
the location of the knot (i.e. the point of intersection
between the two linear splines). The location of the
knot and the parameters of the lines are estimated by
minimizing the sum of the squared differences
between the observed lactate values and the fitted
values.

A log transformation of both the work rate and
blood lactate concentration has been suggested
(LTloglog) in an attempt to gain a better estimate of
the lactate threshold (Beaver et al., 1985).

The 1 mmol rise is self explanatory.
This particular athlete has values of 147, 126, 146 bpm for the three accepted methods.
Note that our HRVT is right in the middle of these.
Is one better than the other?  I couldn't say.
Only note that things are not as black and white as they may sound in review articles.
Bottom line here:
Case 3 (8/17/21):
Data from a blog reader consisting of Fatmaxxer output (Polar H10), artifacts unknown.
Ramp 1: 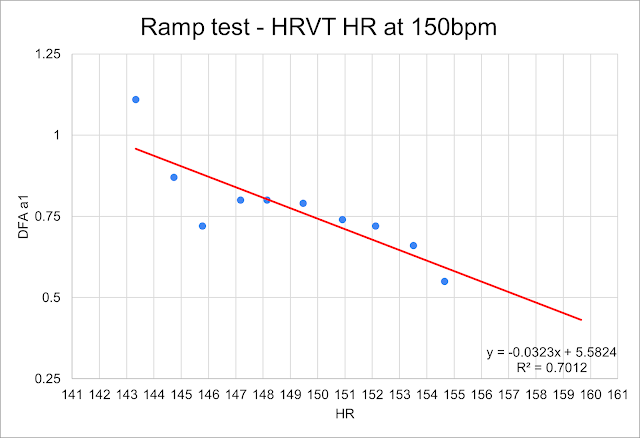 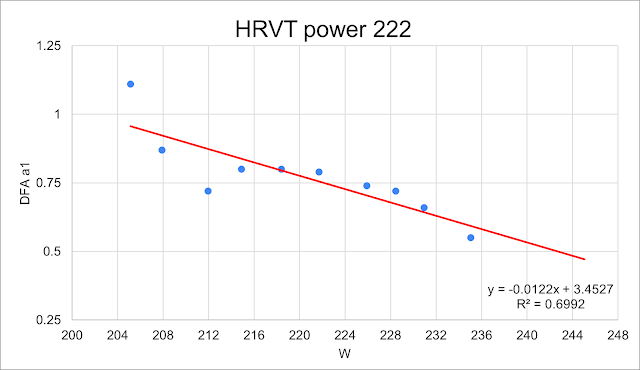 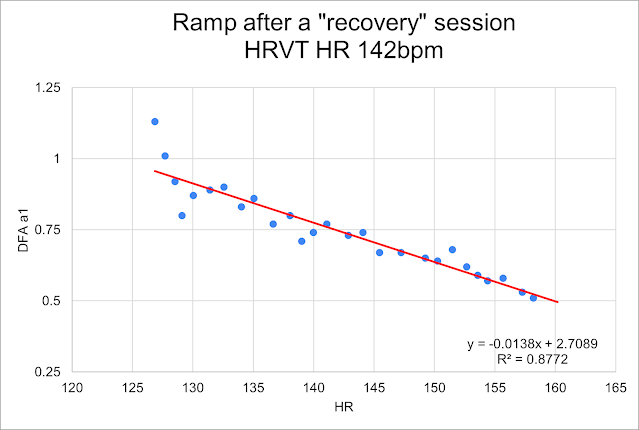 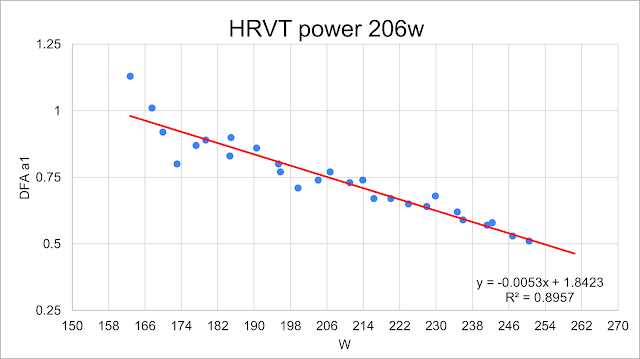 Steady state power/HR sessions done below the HRVT
What we are looking for is a grouping of DFA a1 generally above .75 (with occasional dips) during a session with HR below the HRVT (142-150): 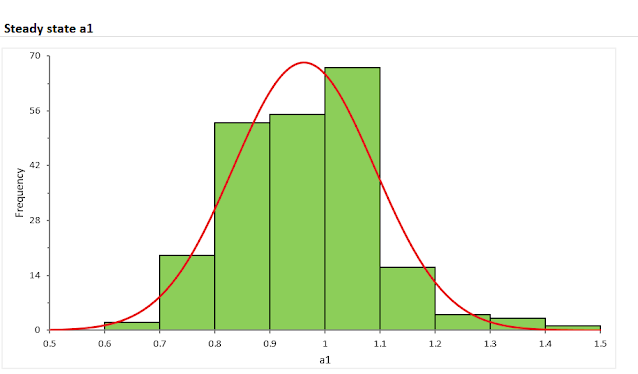 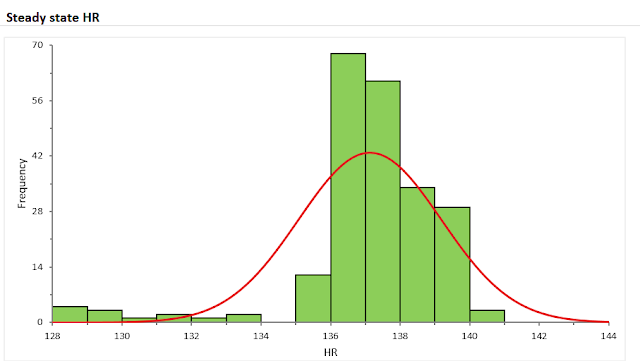 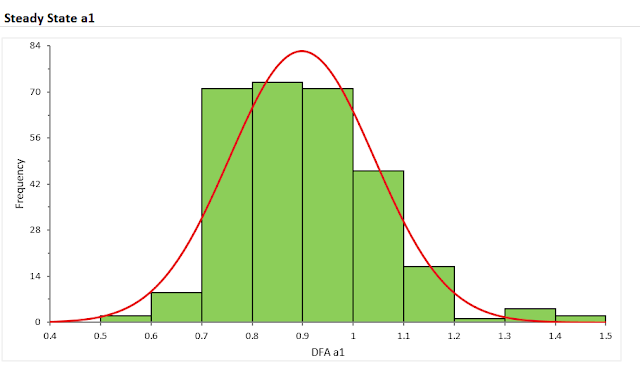 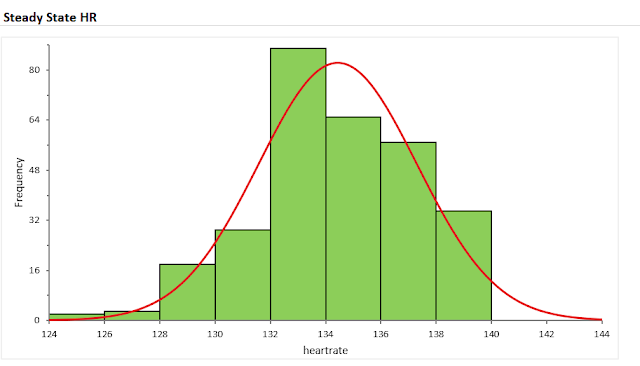 12/2/21 - A problem with a1 not suppressing:
I was asked to look into an issue where a1 did not seem to suppress during an incremental ramp.  The H10 was used, few artifacts seen and for I was stumped for a bit.  The ECG waveform was also fine.
A look at the Kubios data shows the following: 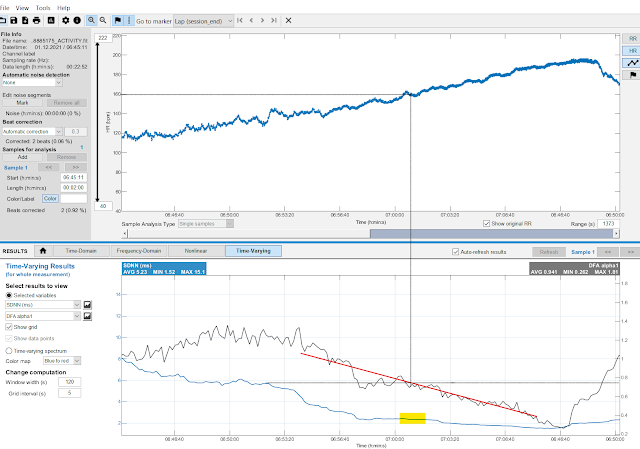 I drew a red line to get an approximate HRVT (a1=.5) of 160 bpm.  To confirm that, it appears that the SDNN begins to nadir at about that point as well.  Although this individual felt that this HR was too high (by prediction), from the autonomic standpoint, it appears to be correct.
Case 4 - 1/3/22
An example of low voltage signal strength causing a1 not be be measured appropriately (a1 was inappropriately low).
A user was surprised that his a1 was too low during even easy cycling - (so not related to the low a1 during running issue).  There were rare artifacts.  I have seen this before and it's often from poor signal strength or R peak voltage.  The following were baseline tracings from the H10 done with Fatmaxxer:

Notice how poor the R peak is, most of the signal is negative.  The R is defined as the first positive peak.  You would think software should automatically flip the polarity, but it does not (including Kubios "auto" polarity mode in preferences).
I recommended flipping the H10 module and trying both center and left chest placement:
Inverted center:

R peaks are improved with module inversion!
We hopefully will see DFA a1 more in line on the next set of tests.
After some time off and better signal, our friend noted this pattern, suppressed a1 at lower power but a rise with higher power.  A review of the Fatmaxxer data showed the reason - excess artifact correction.  Artifact correction above 3% can raise the a1 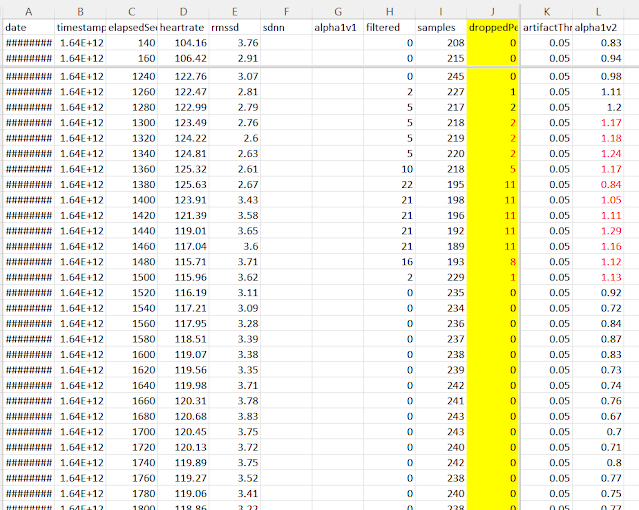 Another session done the following day showed some mild a1 suppression likely due to persistent autonomic stress with a1 .5 to .8 at relatively stable HR, then a decline (circle) with higher intensity: 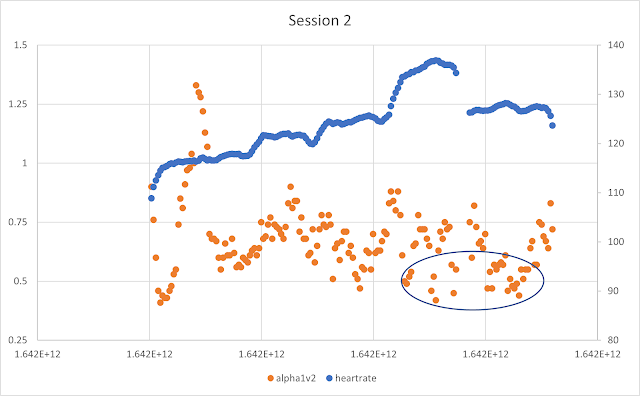 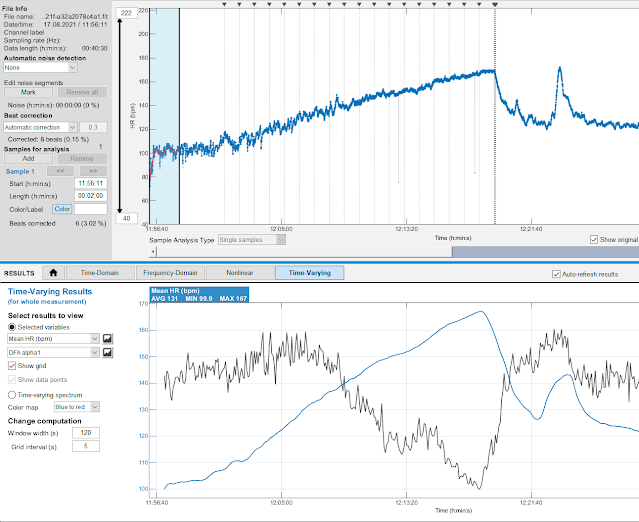 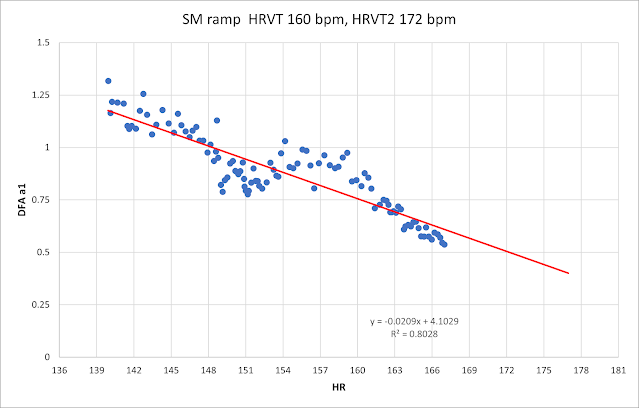